Grit-Lit in the UK: The Birth of Crook’s Hollow 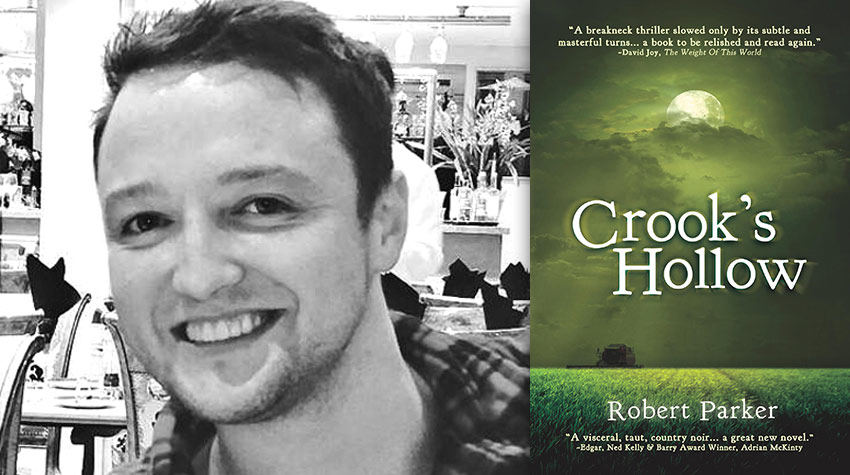 I don’t quite know how it happened, but in 2016, I noticed a shift in my own tastes. It happened as a gradual thing and snuck up on me—it was only when I saw that my to-be-read pile had changed complexion did I notice it.

I’m sure a lot of authors have two separate TBR piles. I know I do. I have a pile of books that I read to keep up to date with the British crime fiction scene, which is my conscientious effort to stay in touch and relevant. And then, there’s my “for fun” pile. This usually has a lot of random stuff in there—whatever takes my fancy—and will feature anything from horror, non-fiction, literary fiction, classics, and so on. But in 2016, it suddenly featured a lot of Grit-Lit, that American genre populated by noir books set in rural settings with hard-bitten characters. In fact, my “for fun” pile was utterly dominated by them.

Early 2015, I had discovered C. J. Box’s Joe Pickett books, which were a revelation to me. The sweeping, wild terrain and thrilling stories, with a cast of characters I have now come to view almost as family, hypnotized me. I ran through the series at speed, and even now, every March when a new one comes out, the world goes into a standstill until I’ve got the new one and devoured it. I never really thought much about why I liked it, but I remember going through that series as being one of the most pleasurable reading experiences I’d ever had.

I’ve always viewed books as escapism, front and center. One of the many joys of reading is its properties of teleportation, and in the case of Box’s novels, the vivid descriptions of settings so many worlds away from my hometown of Warrington, near Manchester in the northwest of England, were so enthralling that I feel at home in Box’s Wyoming despite never having been. And despite the vastness of the mountains in the stories’ setting, it always came back to one little town: the fictional township of Saddlestring, which provided the perfect anchor point for the action to spin around.

When I finished the Pickett series (or at least had caught up), I looked for something else. It appeared that I had subconsciously refined what it was I liked about those books and sought out novels that featured condensed versions of those characteristics—a strong sense of place, a landscape I could only dream of but was inherently fascinated by, and a cast of characters that I could really invest in.

In walked my own sensibilities—dark, noirish sensibilities. I like my stories uncompromising. I like to make hard choices as a reader (and as a writer). I don’t like the easy way out or a neat bow. I like to be pushed and to push back. And then, I found the works of Steph Post and David Joy, whose books A Tree Born Crooked and Where All Light Tends to Go, respectively, opened up a door to me. It felt like a bit of a cultural shift in my own tastes, like how my palette could suddenly accommodate red wine when I hit my mid-20s but couldn’t go near it before.

I adored those books for all the reasons I’ve mentioned. I followed with Daniel Woodrell, Brian Panowich, and plenty others—books tinged with these corners of Americana I had not seen or heard of before, like the works of Nic Pizzalotto, Ace Atkins, and James Lee Burke’s incredible Robicheaux series. I was hooked all over again.

After I had written my debut—and the next two books in that series—creatively, I needed something new. I had been writing an action-thriller series about an ex-soldier righting wrongs across the UK, and while I really enjoyed it, I felt I needed a change. I decided I really wanted to write a dark, small-town story in the style of all those books I’d enjoyed so much—but I knew I couldn’t set it in America. At this stage in my career, and I’m guessing as we go forward, I find a sense of place to be completely crucial to the success and authenticity of my work. If I don’t get those right, I’m going to struggle to convince an audience along for the ride. So I set a bleak, familial, Grit-Lit story over in the UK, and this became Crook’s Hollow.

Transporting those sensibilities was a fun ride, and I enjoyed writing the book immensely. I realized soon that the bonds and pressures of family were dramatically ripe whatever the setting and that small towns on either side of the Atlantic can be equally incendiary. I pulled no punches and wrote from the gut, heart, and instinct. I wrote the book in six weeks, and I had a ball. You could definitely call it my tribute or homage to Grit-Lit—or as the wonderful Steph Post put it better than I ever could, we might just have found “Brit-Grit-Lit.” With a bashful grin, I’ll take it.

Robert Parker is a new, exciting voice and a married father of three who lives in a village close to Manchester, UK. He has both a law degree and a degree in film and media production and has worked in numerous employment positions, ranging from solicitor’s agent (essentially a courtroom gun for hire) to a van driver to a warehouse order picker to a commercial video director. He currently writes full time while also making time to encourage new young readers and authors through readings and workshops at local schools and bookstores. In his spare time, he adores pretty much all sport, boxing regularly for charity, loves fiction across all mediums, and his glass is always half full.