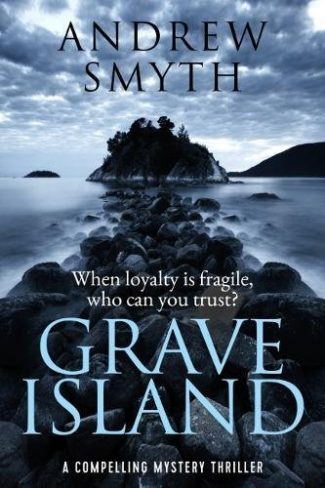 Grave Island by Andrew Smyth is a debut thriller that investigates the very real trade of fake pharmaceuticals and dives into the underbelly of a global threat.

When Philip Hennessey is thrown out of army intelligence after evidence is fabricated against him, his ex-wife’s school friend asks him to investigate the sudden death of her father, who she thinks has been murdered.

Philip soon discovers a far larger problem: a lethal trade in the manufacture and distribution of counterfeit drugs.

Using his contacts within the intelligence agencies, he follows the trail across the world, chasing counterfeit vaccines that could kill thousands.

Pitted against an international conspiracy, can Philip prevent the fake medicines from getting through, and who can he really trust?

As we sailed further away from Zanzibar Island, the other boats disappeared into the night, leaving the faint light of the dhow ahead of us, but even that was soon extinguished – presumably they thought the risk of collision was negligible away from the land. The sky was overcast and only a few stars were visible and the darkness was impenetrable. As I peered ahead, someone tapped me on the shoulder and I turned and saw one of the crew was holding out a plate. I followed him forwards to a small cuddy where I was astonished to find a small oven lit by charcoal. The cook showed me what looked like goat’s meat cooking on a skewer which he served me with some rice from a boiling pot. I took it forward and sat down and found it surprisingly good. I ate slowly watching the bow wave cream through the water, scattering sparks of phosphorescence into the air as the boat ploughed through the black sea. There was no sign of a light up ahead but I’d checked the track on the computer and could see the target on the antiquated radar unit. On our current course we were heading further south to the commercial port of Tanga. Although this was in Tanzania rather than Kenya, the border wasn’t that far away to the north.

I tried to sleep but in spite of the gentle rocking of the boat, my head was swirling with anxiety at whether we might lose them in the darkness. What had started as a chance discovery of mislabelled drugs had turned into a desperate race to prevent what could be a major tragedy. I went back mentally through the steps we’d taken, but couldn’t see where I’d ever had an alternative. This had to be the end of it.

I came to, suddenly aware that Nazeem was calling to me. I managed to get to my feet as he beckoned me to follow him back to the wheelhouse and the radar. We looked at the screen which was glowing a dull grey. ‘No radar, no course,’ Nazeem said.

I looked across to my computer which was linked to my satphone but all it could tell me was where we’d been heading before darkness made it lose the picture. ‘Hold this course. They’re not going to change it in the middle of the night unless they think they’re being followed and I don’t see how they could have spotted us amongst all those boats off Zanzibar.’

‘No radar, no course,’ Nazeem insisted. ‘We go back.’ With that he turned the wheel and the boat leaned into a curving turn heading back where we came from.

I ignored him and went to the radar set and fiddled with the connections at the back. It didn’t take me long to see that the scanner unit had been unplugged, leaving the screen display an unhelpful grey. I glanced across at Nazeem who was watching me intently. He turned to one of his crew and spat out a command and I could sense the atmosphere change suddenly.

I heard the two crew members close up behind me but I tried to ignore them and went back to the computer screen. ‘We can pick them up again when it gets light,’ I said. ‘We don’t need the radar.’ I hoped they wouldn’t see me hit the redial button on the satphone. I turned to face the crewmen behind me. One of them was carrying a club and swinging it menacingly. He stepped towards me but on another sharp command from Nazeem, he stopped. I looked from them to Nazeem, but there were too many of them.

Nazeem smiled and spat over the side. ‘You want the hard way?’ he sighed. ‘You should have left the radar alone.’

‘You unplugged it yourself,’ I said.

Nazeem shrugged. ‘Perhaps. But we can’t take you back now – I always wanted this to be easy. What’s that?’ he added, as he heard the satphone. One of the crew went over and picked it up. I couldn’t hear if there was anyone on the other end, but Nazeem looked at me and shook his head. ‘You won’t need this,’ he said and unplugged it and threw it overboard. ‘You can dive for it but it’s half a mile deep here. ‘Search him,’ he said and repeated it in Swahili.

I held up my arms – I had nothing to hide. ‘Why are you doing this? If it’s money, I can pay you whatever you want.’

‘With people like you it’s always money. There are more important things you wouldn’t understand.’ Nazeem said something rapidly in Swahili and two of the crewmen grabbed me under the arms. ‘So what shall we do with you? I think it’s better if you simply disappear we’ll let the sharks deal with you.’ He nodded to the men holding me. ‘Kwaheri,’ he said and I was pulled to the side of the boat and thrown in.

The shock of hitting the water made me gasp and I nearly took a lungful of seawater which would have finished it there.

When I’d orientated myself, I tried to swim back to the boat to hang on, but I heard them start the engine and watched helplessly as the boat disappeared into the darkness. The sky had now cleared and with just a sliver of a moon the stars were almost bright enough to see the horizon. Almost. The light wind left small waves which glistened with phosphorescence and in any other circumstances it would have been magical. I kicked off my shoes to give me more buoyancy and floated on my back.

The faint lights of the dhow were gone and there was nothing to see except a small disturbance on the surface a dozen metres away. I watched as a trail of phosphorescence approached and then felt a nudge on my back and then a swirl of water washed over me. I forced myself to stay calm and treaded water as I looked around. My brain told me that I had nothing to fear, that I was only an object of curiosity and not a meal. But my guts told me otherwise and with difficulty I managed to stay quiet. I heard the swish of a tail behind me and turned to see a dorsal fin coming towards me. I moved onto my back and bent my knees.

When I felt the snout brush against me, I kicked out as hard as I could and there was a threshing of water and the fin disappeared into the blackness. Of course there were probably others, but I reassured myself that it was curiosity, rather than hunger, which made the shark approach. I lay on my back and floated – at least the tropical sea was warm and there was hardly a wind to ruffle the surface.

The nearest land was half a mile away – vertically down – otherwise we were twenty miles from Tanga and only the slightest possibility of a boat finding me before the sharks attacked again. I realised that not only was I going to be dead very shortly, but that I hadn’t stopped the fake drugs which were on their way to the mainland. I’d failed.

Andrew Smyth is the author of Caesar’s Passage, which was shortlisted for the Authors’ Club Best First Novel award, and an Introduction to the Canal du Midi, which was the inspiration for Rick Steins’ TV series. He has also written extensively for yachting magazines, as well as writing and editing his own magazine, Cruising World. A keen yachtsman, he has sailed extensively through the Mediterranean, the Red Sea, the Indian Ocean, the Caribbean and the real Grave Island in Zanzibar―experiences which bring his writing to life.