From Page to Screen with Death Wish: The Case of the Disappearing Conscience 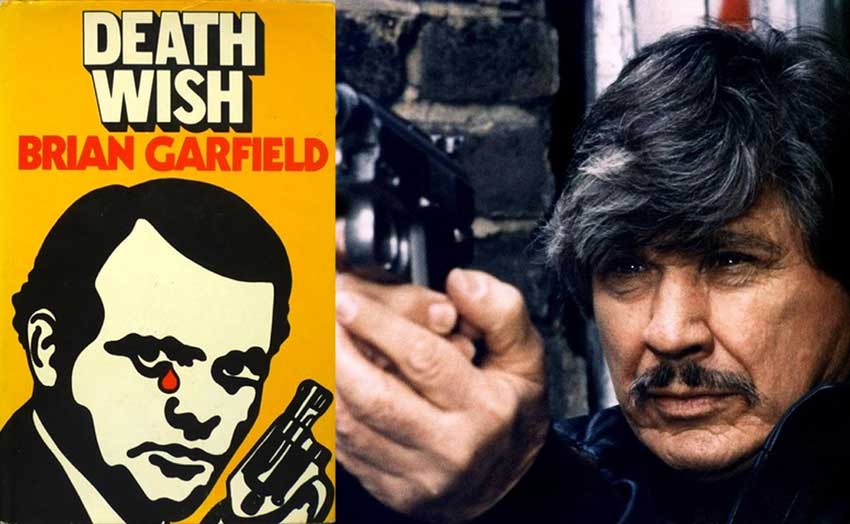 When his wife is killed and his daughter left in a vegetative state after a brutal assault, a staunch liberal seeks comfort in vigilante justice, gunning down the monsters who stalk the savage street of 1970s New York City. And in the end, he finds himself deeply conflicted over his descent into violence.

Sounds a lot like the 1974 film Death Wish directed by Michael Winner. Everything except that last part. Anyone who’s seen the movie knows there is no such moral ambiguity. It’s a celebration of violence, and Paul Kersey, played by granite-faced actor Charles Bronson, is the answer to who will save a city gone to hell.

If you want a protagonist with a conscience, you have to look to the novel by Brian Garfield. Yes, Death Wish is in the same company as Jaws and Die Hard. Movies so iconic you couldn’t be blamed for not knowing they were based on books. And, like so many book-to-film adaptations, the filmmakers kind of missed the point.

Released by David McKay Publications in 1972, Garfield’s novel was a meditation on the way violence twists and breaks people. The way it serves as a line of demarcation between order and madness. A line that, once you cross it, you’re different. And maybe not better.

The protagonist is Paul Benjamin, a CPA (not an architect, like Kersey). It’s not until toward the end of the book that Benjamin makes his first kill. And in the final moments, he’s a man adrift, unsure of what he’s become.

It’s a marked difference from the movie, where Kersey gleefully kills scores of hoodlums (including a young Denzel Washington, in an uncredited role). There’s no comeuppance. The crime rate drops, and even after the cops run him out of town, the final moments show him poised to start a new killing spree in Chicago.

In an excellent examination of Death Wish as a powerful piece of schlock cinema, Birth.Movies.Death critic Devin Faraci writes:

Critics hated Death Wish, but the movie spoke to audiences. It’s not hard to see why. Even now it’s easy to get sucked up into the macho mythology of the vigilante gunslinger; the movie presents no competing theories on how to deal with the problem of crime. Nobody talks about bad schools or troubled social services or a class system inherently designed to keep people down while dangling gold and goods just in front of their faces. The criminals are just thugs, bullies, assholes, unrepentant monsters as facelessly disposable as Indians in Westerns or zombies in the modern day.

The 1970s were rough on New York City, for sure. It was a period during which taking the subway meant you had to weigh whether your destination was worth the risk of getting mugged—or worse. So it’s not terribly surprising that someone would look at the major beats of the story, and see an opportunity to play out a revenge fantasy. Make the argument that the common man shouldn’t have to live in fear. All it takes is hitting the bullies back.

Garfield, meanwhile, was so unhappy with Winner’s film that he wrote Death Sentence as penance. The sequel finds Benjamin back to killing in Chicago, but reconsidering his path—he’s falling in love, innocent people are being hurt trying to emulate him, and there’s a new vigilante on the loose.

In a one-paragraph review, The New York Times jabbed if for being filled with a “lot of didactic padding,” though Pulp Serenade took a deeper reading in a 2011 review that praised its thoughtful exploration of vigilante justice:

Garfield doesn’t place any obvious mouthpieces in the novel, nor does he set up any easy straw men. He writes each of the different perspectives with conviction and thoroughness, and he respects the complexity and controversial nature of the issues he has undertaken. Garfield’s relationship to Paul Benjamin is complicated: he emotionally sympathizes with Paul’s violent instinct yet, at the same time, intellectually abhors it. Attempting to work out that contradiction is what makes the story so fascinating to read.

But for anyone unfamiliar with the book, it’s more than worth picking up. It remains one of my favorite books set in New York City, because it cuts to the throbbing black heart of a very dark period in this city’s history.

Today, Times Square more resembles a theme park or a corporate playground. There were 328 murders in the city last year, compared to 1,691 in 1972, when the novel was released. And still, the bad rap remains. Friends of my wife’s, who were visiting the city for the first time on the occasion of our wedding, took off their rings before getting on the subway. This is despite New York City being officially recognized by the FBI as being one of the safest big cities in America.

It’s going to take a little longer before people forget the jungle that gave birth to Pauls Kersey and Benjamin.

Luckily for us, Benjamin seems to have prevailed.