The Devil in Her Way is the second Maureen Coughlin novel from Bill Loehfelm, a follow-up to The Devil She Knows (available April 30, 2013).

Maureen, the plucky waitress from The Devil She Knows, has a new job in a new city and is ready to put her past behind her for good. As a rookie cop in New Orleans, Maureen is rebuilding, recreating herself after the events of The Devil She Knows, and she finds New Orleans is still, all these years later, pulling itself together after Hurricane Katrina’s destruction and the wave of corruption that plagued the city before and after.

Researching other opportunities, she discovered that New Orleans, flush with federal grand money, was announcing its first academy class in three years. She started reading about the city and the police department in the online version of the New Orleans newspaper. Even six years after Katrina, she kept seeing words like remake, recover, and rebirth—things she wanted and needed for herself. A new, reform-minded police commissioner had rolled into town not long ago and now sat at the right hand of a popular mayor. Firings, forced retirements, and indictments battered the department. Cops going to jail every month it seemed. All the scandal only heightened her attraction. She saw opportunity in it. She applied. She got in, with an offer of a city job until her academy class filled up. Just as she’d suspected, the NOPD was hot for fresh blood, eager to recruit from beyond the city and the state. And then all that was left to do was fire her therapist, pack the car, and kiss her mom goodbye.

New Orleans is a perfect setting for stories of rebirth, but author Bill Loehfelm also captures the flavor, the spirit, of a city with both a rich history and raw poverty. Especially poignant is the contrast between the new transplant with the official badge and the long-time residents without even a local address or phone number to call their own.

“A lot of families that got scattered after the storm stayed scattered. Whoever handled Marque’s paperwork inside Roots wouldn’t look twice at a Houston cellphone number attached to a grandmother moving back to town from Baton Rouge. Paperwork that says Houston on one line, Baton Rouge on another, and New Orleans on a third? That’s normal.”

“Jesus,” Maureen said, “how does anyone keep track of anything around here?”

Preacher and Dodds traded glances, each giving the other a chance to answer.

Preacher stepped up. “Exactly like this. By driving around all day and paying attention, by talking to other people trying to pay attention and then threading the stories together. Legwork. That’s the job, Coughlin. That’s the city.”

And it’s a city that grows on Maureen from the beginning and a job that she finds herself frustrated by, but utterly committed to. A city that eats young boys alive. Boys who, had it not been for the storm, might have lived their entire short lives within a few blocks. Boys she wants to save from fates that pull her out of bed late at night. Boys who hover between adulthood and childhood, with little hope of reaching one and little experience with the other.

Maureen wants to do well and she’s as gung-ho as any rookie. She’s eager to impress, eager to move up and move on. She’s earnest in her desire to help and she’s relentless in her pursuit of justice for the first death she encounters on the job.

It’s an interesting undertaking for a police procedural sort of book. So many feature homicide detectives or federal agents doggedly chasing after serial killers and drug dealers. The Devil In Her Way is quiet and strangely subtle for a book that starts with a punch to the face. It’s not bold or particularly terrifying. It’s long days in a vest in the heat. And it’s hot nights with her nightmares and sputtering air conditioner. But it’s also immensely interesting, page-turning, and fascinating. And it’s terrific watching Maureen juggle her last days of training and the early days of her new career.  Because it’s not so much a story of crime and murder as a story of rebirth and hope.

In some ways, cities were the same. Some things, she figured, you couldn’t leave behind, no matter how far away you went or how strange a city you picked. Unless you left people behind, too, and Maureen figured she wasn’t ready for that quite yet. She wanted another shot at life before she struck out for the yawning wastelands and built her Unabomber shack.

To enter for a chance to win one of five Advanced Reader Copies of Bill Loehfelm’s The Devil in Her Way, make sure you’re a registered member of the site, and then simply leave a comment below.

NO PURCHASE NECESSARY TO ENTER OR WIN. A purchase does not improve your chances of winning. Sweepstakes open to legal residents of fifty (50) United States and the District of Columbia, who are 18 or older. To enter, fill out entry at www.criminalelement.com/blogs/2013/04/fresh-meat-the-devil-in-her-way-bill-loehfelm-neliza-drew-new-orleans  beginning at 9:30 a.m. Eastern Time (ET) April 27, 2013. Sweepstakes ends at 9:29 a.m. ET on May 4, 2013 (the “Promotion Period”). Void outside of the 50 US and DC and where prohibited by law. Please see full details and official rules at https://www.criminalelement.com/page/official-rules-the-devil-in-her-way-comment-sweepstakes. Sponsor: Macmillan, 175 Fifth Ave., New York, NY 10010 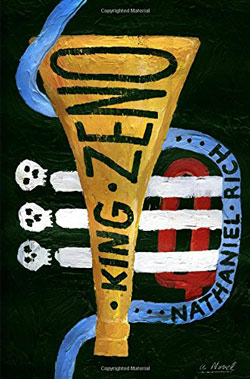