I don’t have a great deal of experience with Scandinavian authors. I have read the Stieg Larsson novels. And I’ve read a couple books by Icelandic author, Arnaldur Indridason, but that’s about it. Still, I knew that the pace and plotting would be different than American novels. More leisurely. Seemingly more relaxed.

In American mystery novels, the protagonist is usually introduced on the first page. At least by the second chapter. I forgot that this is the sixth book in the Ann Lindell mystery series until page 111, which is where she shows up for the first time. Did the story suffer for the delay? I didn’t think so. She’s an interesting and complicated character, but so was everyone else. Lindell adds an interesting layer, though.

Agnes rounded the table, opened a drawer, and took out a plastic bag which she gave to Lindell.

“You probably know that Viola is not well,” Agnes said suddenly, when Lindell was standing with her hand on the doorknob.

She stared at Agnes.

“My sister Greta keeps track of everything,” Agnes explained.

“You’re the police officer from Uppsala who associated with Edvard, yes. I recognized your name. I’ve known Viola my whole life. I’ve met Edvard too. A good person.”

Lindell bowed her head and got an impulse to hide her face with the plastic bag.

There is a piece of writing advice I have heard many times in relation to mystery novels: lead with the body. Another, more recently discovered, bit of advice states that the reader will lose interest if the murder hasn’t occurred by page fifty. I definitely don’t agree with the first one. I like to know something about the victim before he or she is done in. Otherwise, there is no impact to the reader from the death, good or bad. The latter statement may have more truth to it, but there are no absolutes in writing.

So how did the author keep me reading when the murder takes longer than fifty pages to play out? Eriksson builds tension bit by bit. The elderly and aristocratic Professor Bertram von Ohler wins the Nobel Prize for medicine. Yet no one in his circle is particularly pleased by the announcement. There’s jealousy, yes, but is there more to it than that? He may even have a few doubts. Then some “pranks” are pulled on the professor that bring the police into the picture.

The notification came unexpectedly. Bertram von Ohler was eighty-four years old after all, somewhat frail, his legs did not always hold, the numbness in his hands created difficulties, especially at the dinner table. The dizziness in the evenings was getting more troublesome and meant that he socialized much less often. Bridge nights were sacred, however. There were some who thought he did not have much time left; the whispering about his ill health had increased.

Some were old colleagues who took pleasure in backbiting the old professor and competitor, or else they were simply acquaintances who for lack of other diversion spread unfounded rumors. One day it was some neurological disease that would soon break him down, the next the problem was advanced prostate cancer. There were also friends around him who listened eagerly, perhaps contributing a detail or episode and in that way kept the fire going.

Secrets are the real threat. And it seems everyone has whole closets full of them. As each one is revealed to the reader, the tension grows. What does this one mean? How does it fit into the big picture? Who else does it/will it affect? And page after page is turned to find out.

Family also plays a big part in the story. Family status. Family history. And, of course, family secrets. Who knows what about whom?

There is a murder. But since it’s a long time in the making, the book turns from a who-dunnit to a who’ll-do-it. Just who will be the victim and why? The anticipation is delicious. And the payoff is quite satisfying.

My one little complaint is that some of the sentence structure is awkward. There were also a few scenes where it wasn’t quite clear who was doing the talking or who the author was referring to. I don’t know if that was part of the original novel or an issue of translation from Swedish. The instances were rare, however, and didn’t detract from the overall story.

This would be a good book to take to the beach or on a plane ride. Somewhere you can sit back and sink into it. I found trying to figure out who will do what to whom as enjoyable as solving the usual mystery puzzle. 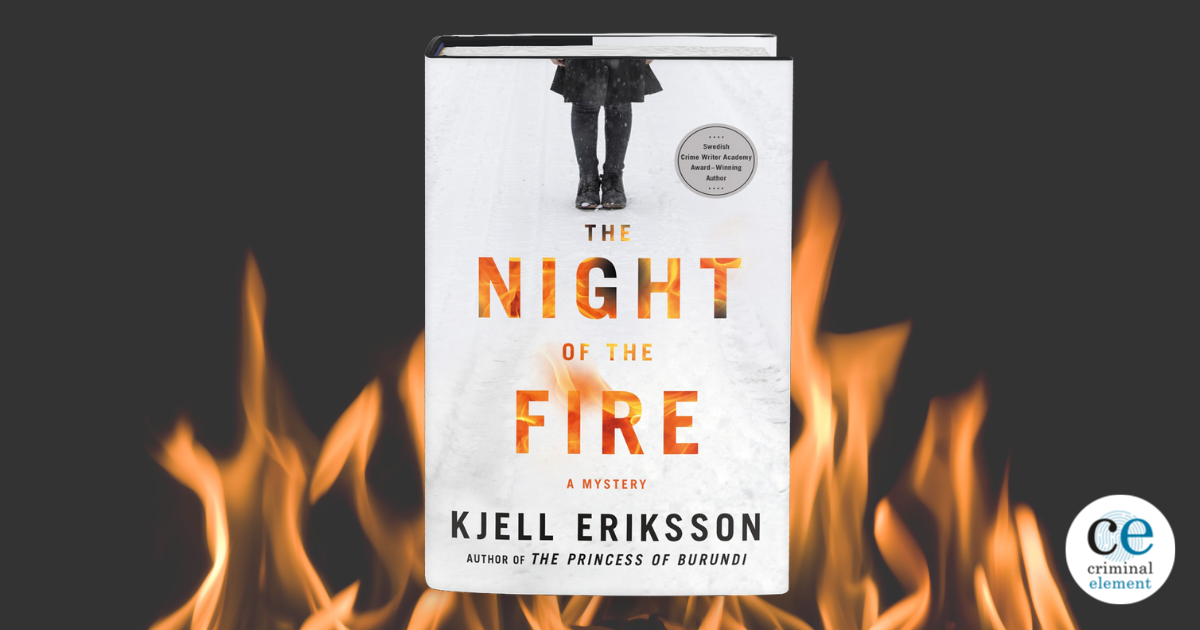 It has been ten long years since Swedish novelist Kjell Eriksson wrote about police inspector Ann Lindell. Since retiring from the Uppsala police department, Lindell “is living a quiet life, producing local cheese in a small town in Uppland.” She has not moved far since Uppland is only 30 kilometers from Uppsala, the fourth largest…

The Night of the Fire by Kjell Eriksson: Featured Excerpt

Chapter 1 Regina Rosenberg was a new hire, and this was her third day on the job. But that didn’t make her a dimwit. “Lindell.”  “Excuse me?” “I want to speak with Ann Lindell.” “There is no Ann Lindell at the department,” Regina Rosenberg stated after a few quick finger taps and a glance at…