Looking back, there’s a good chance I owe my taste in mysteries to the fact that I watched a lot of Moonlighting as a kid. You know, that old ABC show starring Cybill Shepherd and Bruce Willis as private detectives? The writing was sharp and funny, and the mysteries were light, but always intrigued. And then there was that fabulous chemistry between David and Maddie. Should they, or shouldn’t they? Will they, or won’t they? And if they do, will it ruin everything?

Lots of the books I read can lay claim to having good writing and compelling mysteries, but that last thing? The chemistry part? That’s a lot harder to find. Not that many authors choose to incorporate that kind of romantic entanglement into their books, and even fewer do it successfully.

Karen E. Olson and her Tattoo Shop Mysteries are an exception to that rule. From Olson’s new release, Ink Flamingos, here’s tattoo artist Brett Kavanaugh on her friend-slash-rival-slash-potential-love-interest Jeff Coleman:

Jeff Coleman and I had a complicated relationship. It had morphed from totally disliking each other to grudgingly respecting each other to a weird sort of friendship. He gave me the koi tattoo on my arm, and I tattooed “That’s Amore” on his shoulder, below a scar from a bullet he’d taken for me.

“So, Kavanaugh,” Jeff said, leaning against the wall, his arms crossed over his chest. “Are we going to talk about it?”

I knew what he was referring to, but I played stupid. “What?”

“This thing between us.”

“We do not have a thing,” I said, and the elevator doors opened.

We stepped inside, and we were trapped together for the moment. I couldn’t get away.

But he didn’t say anything. Not until the elevator doors opened into the lobby. As I started out, he touched my arm and said, “We do have a thing.” And then we stepped out into the lobby.

Jeff chuckled. “You really don’t think it’s because we’ve got a thing?” he teased. “Because we don’t. You said so.”

So maybe I was wrong, but I started to seethe. This was totally why wecouldn’t have a thing. Because I hated him. Because he drove me crazy.

Right. That kiss had driven me crazy.

He wasn’t my type. And he was too old. He had to be at least ten years older than me. He smoked. Or at least he had smoked. His lungs must be black from all that smoking. His nose was a little off-kilter, as though it had been broken at some point, his smile crooked, his eyes a bright blue. So maybe I’d noticed his eyes. How kind they could be. How they flashed when he was angry. How intense they’d been when I’d given him that tattoo under his bullet scar.

His fingers snapped in front of my face.

“I know I swept you off your feet, Kavanaugh, but you’ve got to stay with the program here.”

I made a face at him and swatted his hand away. “Get over yourself,” I said sharply, surprising myself—and him.

Something akin to hurt flooded those blue eyes, but then quickly cleared and he said, “Look over there.”

I wish more authors would give their detectives a love interest who’s also their sparring partner. Those fireworks? Not only are they fun to read, but they can lift a character off the page and turn them into someone you can care about. And when the murderer-du-jour is behind bars and that final page has been turned, those fireworks are what leave you wanting more—and what sends you scurrying to pre-order that next book.

Ink Flamingos will be released by Berkley Prime Crime tomorrow, and in the meantime, you can check out my full review over at The Season.

For more insight on new releases, go to our New Releases feature section. 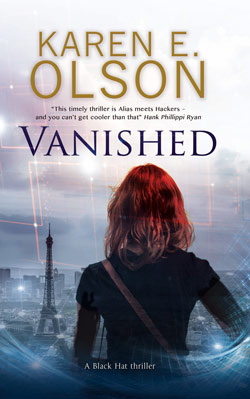 Vanished by Karen E. Olson is the fourth book in the Black Hat thriller series, which follows computer hacker Tina Adler, who heads to Paris, France, in search of the truth but discovers that someone is close on her trail (available February 1, 2018). Connecticut’s Karen E. Olson made a name for herself among crime…