Lisa Gardner’s new D. D. Warren novel Catch Me begins with a chilling prologue. Young Charlie Grant and her older sister, Abby, suffer at the hands of their mentally ill mother. Charlie has been burned by an iron, fed glass, and told frequently, “be brave. Everyone has to die sometime.”

Charlie was saved by her aunt and managed to make something of a normal life for herself. Now 28, Charlie lives in Boston and seeks out Detective D.D. Warren asking for her help because, she says, “in four days, someone is going to kill me.” Charlie tells a disturbing story: For each of the last two years, at 8:00 p.m. on January 21st, a woman has died. The victims are Charlie’s childhood best friends, and Charlie expects to be next. But as D.D. quickly learns, Charlie Grant, haunted and damaged, doesn’t plan on going down without a fight. She has been training to survive, to outshoot, outfight, and outrun a murderer.

D. D. is on the hunt for a pedophile killer, one who leaves notes at the crime scenes with catch me written on them. This might be either a plea or a dare, and D. D. comes to wonder if Charlie is somehow involved.

Fans of the series know D.D. as a tough, independent, workaholic. And in Catch Me, D. D. is no less dedicated to her job, but the two men in her life, Alex and their son Jack, have changed her, brought love and balance into her life. Now rather than rushing off to work in the morning, D. D. wistfully leaves her son behind.

Jack had been snuggled into his carrier when she’d left him this morning. All wide blue eyes and fat red cheeks. When she’d kissed the top of his head, he’d waved his pudgy little fists at her.

Motherhood has brought a new dimension to D. D.’s character, giving her an empathy she lacked in earlier novels, and her character is richer for it. On hearing Charlie’s story, D. D. takes more than a clinical interest. Charlie has been damaged by her mother, and D. D. can see through that damage to the little girl, and she wants to help her, not just as a cop, but as a mother.

Alex would come home from work each day, glance at her and Jack in the rocking chair and smile at her in a way no man had ever smiled at her before. Then she’d get a strange feeling in her chest. Of belonging. Of being. Contentment maybe.

Having often felt like she was living on the outside of her life, D. D.—knowing what Charlie has lost—appreciates her own family even more.

Every Wednesday, we here at Criminal Element will put together a list of Staff Picks of the books that published the day before—sharing the ones that we are looking forward to reading the most! This week, Kelley Armstrong's third Casey Duncan novel pairs with Lisa Gardner's ninth D. D. Warren procedural to highlight an awesome… 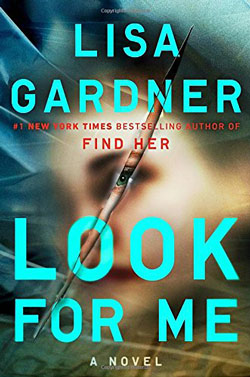 Review: Look for Me by Lisa Gardner

In Look for Me, #1 New York Times bestselling author Lisa Gardner's latest twisty thrill ride, Detective D. D. Warren and Find Her's Flora Dane return in a race against the clock to either save a young girl's life … or bring her to justice (available February 6, 2018). Lisa Gardner has achieved another career…