Bad Paper: Chasing Debt from Wall Street to the Underworld by Jake Halpern is a true account of the cutthroat world of debt collecting and the lenghts people will go to obtain information (available October 14, 2014).

When I was younger someone told me, ‘Put on a suit and you can rob anybody.’ Truth is, I haven’t changed much, but many people respect me now, because I have a business and property and look respectable…If you can pay the right lawyer or have the right look, you are respectable. If you walk in with a ripped shirt and a public defender, you are an animal.

So says Brandon Wilson, entrepreneur, convicted armed robber and dealer in your personal data. His employees are mostly other ex-felons, second- or third-chancers trying to go straight in one of the few businesses that will have them.

Wilson’s is perhaps the only segment of the financial industry that can make derivatives trading look honest: debt collection. He’s one of the major players in Bad Paper, Jake Halpern’s non-fiction dissection of America’s debt business.

Halpern contributes regularly to the Wall Street Journal, the New Yorker, Smithsonian, and other national publications, and is a commentator on NPR’s All Things Considered and contributor to This American Life. His prose is clean and goes down easy, as if this is the written version of an extended piece on Weekend Edition. Halpern talked to many people on all sides of the issue – collectors, debtors, lawyers, regulators, outside experts, thugs – and their voices and experiences are a major part of his reportage.

Bad Paper’s central character is Aaron Siegel, a Wall Street escapee who returned home to Buffalo, NY, where his family had been local gentry, and took a safe but not particularly productive bank job. There he discovered a cottage industry in debt collection, thriving like little else does in a Rust Belt city known otherwise for poverty and urban decay. He decided to try his luck and nearly lost his shirt until he became partners with Wilson and his data.

The data is key. If you don’t pay off your debt for whatever reason, your bank or credit-card company rarely keeps that debt on its books beyond the charge-off date. It sells your paper and that of thousands like you for fractions of pennies on the dollar to a collector, who’ll try to cadge as much money as he can from you and the other people on the list, then sell its remains to another collector, who sells to another and so on until the last possible drop of value is squeezed out of it.

Buffalo is where these tattered Excel spreadsheets go to die.

Once a portfolio of debt has been to Buffalo, it’s marked for life. If paper has been owned or collected by a Buffalo company, the assumption is that it has been beaten up, tapped out, and collected upon by any means necessary. Potential buyers simply assume the worst.

“By any means necessary” isn’t hyperbole. As with any other part of the financial system, there are rules in place; like most other parts of the financial system, the rules are regularly broken. Thinning ranks of overburdened or co-opted regulators are unable or unwilling to track down and prosecute abusers in cases that are difficult to prove and don’t change the underlying conditions.

The Fair Debt Collection Practices Act – the industry’s rule book – says that “a debt collector may not use any false, deceptive, or misleading representation or means in connection with the collection of any debt.” Yet Jimmy, another collector whose words add both weight and texture to Halpern’s reportage, tells us:

I say, ‘This call is in reference to a prelegal matter, and we will file a judgment against you. Please call before we have to take this as a refusal.’ ”

“It is not true at all,” Jimmy replied.

Halpern tells about agencies whose collectors pretend to be lawyers or cops, wearing fake badges, threatening to haul debtors off to jail, or lying about the outstanding balances in order to scare their targets into settling for more than they owe – if they still owe anything at all. Yet the umpires are barely able to see the field, far less throw flags on the play:

…the FTC [Federal Trade Commission] conducted fewer than fifty investigations a year…As of January 2013, the CFPB [Consumer Financial Protection Bureau] has the authority to supervise companies whose collection activities generate more than $10 million in annual receipts, which includes the nation’s 175 largest players…The problem is that there are 9,599 debt collection businesses in the United States.

Debt collectors need no licenses or bonds; there may not even be a background check, especially not with a firm that’s no more than a room full of men on telephones. The skills that make a good collector are the same that make a good criminal: a willingness to cut corners, a disregard for rules and regulations, an ability to successfully manipulate people, and a lack of empathy. “You got guys literally coming out of prison today and next week they got a collection agency,” says Larry, another of Halpern’s sources.

The sketchy practices don’t just happen on the phone. Collectors leaving one agency for another will steal their old firms’ debtor lists; brokers may sell the same lists to several agencies simultaneously. Halpern follows Wilson to a collectors’ convention/free-for-all in Las Vegas, where spreadsheets are peddled out of hotel rooms like Disney pins (or drugs – one of Halpern’s sources calls debtor data “the white man’s crack”). Each time a list sells, the previous owner washes his hands of all responsibility for it, including any guarantees that the data is or ever was accurate.

Like many studies of the financial industry, there’s no happy ending to Bad Paper. Halpern notes in his epilogue that a 2010 FTC study concluded, “The system for resolving disputes about consumer debts is broken.” You’ll understand how broken it is by the last page of this book. If you don’t come away from this either sad or mad…perhaps you have a future in the debt-collection business.

Lance Charnes is an emergency manager and former Air Force intelligence officer. In his international thriller Doha 12 , the only debts are the blood kind. Customs and Border Protection stops people running to Mexico to escape their debts in his near-future thriller South. He tweets (@lcharnes) about scuba diving, shipwrecks, art crime and archaeology, among other things. 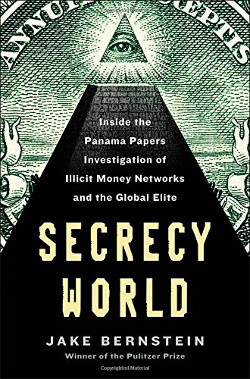 Secrecy World by Jake Bernstein, a two-time Pulitzer Prize-winning journalist, takes us inside the world revealed by the Panama Papers, a landscape of illicit money, political corruption, and fraud on a global scale (available November 21, 2017). A hidden circulatory system flows beneath the surface of global finance, carrying trillions of dollars from drug trafficking,… 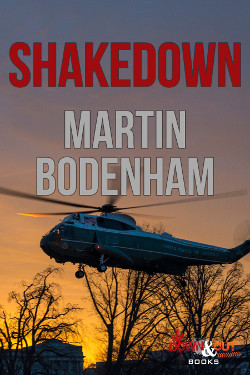 Shakedown by Martin Bodenham is a financial thriller dealing with corruption and greed that stretches all the way to the White House (available November 13, 2017). Damon Traynor leaves a glittering career on Wall Street to set up his own private equity business. When it is the winning bidder in the multi-billion dollar auction for…