April 1, 2020
Paige Shelton, author of The Stolen Letter, delves into the fascinating history of a few legendary Scottish monarchs—their unusual behavior, attributes, and the mysteries that shroud their legacies. 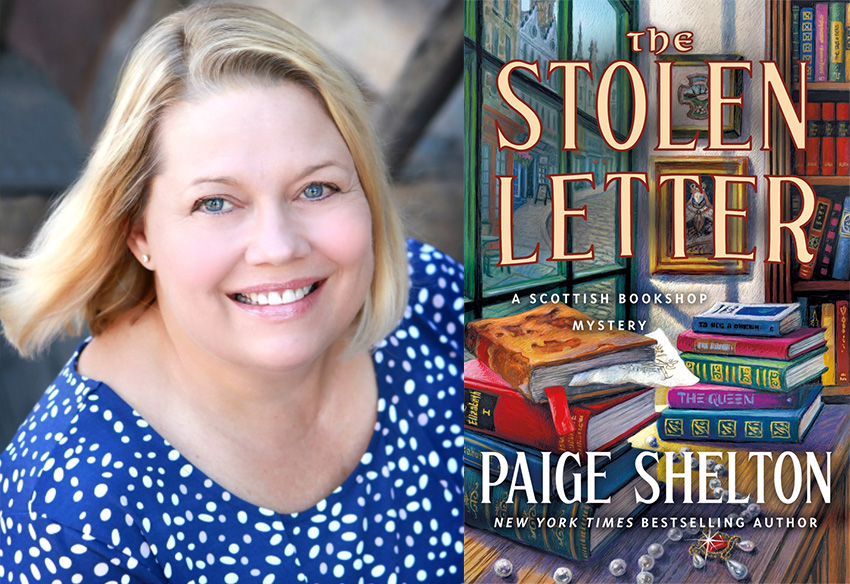 Kings and queens being hanged, beheaded, and poisoned. It seems Scotland has seen more than its fair share of suspicious regicides.

Before I started writing The Stolen Letter, I didn’t know much about Mary, Queen of Scots, but I’ve always held a fascination for the martyred queen. Over the years, of course, I’d picked up on a few things; my murder, mayhem, and mystery mind (fictionally only, of course) mostly glomming onto the facts that she was held prisoner inside castles and that she was beheaded after probably being betrayed. Come to find out, those were just mere specks of her fascinating history.

Most of my research for the details I included in The Stolen Letter came from John Guy’s The True Life of Mary Stuart Queen of Scots. It’s a big book, full of historical detail, yet totally compelling. According to the quote on the cover, the New York Times said it’s “As enthralling as a detective story.” I agree.

There’s much to learn about Mary – she must have been an incredible force – but a few things stood out and made me wish I could run into her on the street and have a sit-down, a wee bit of blether. For instance, she was tall, almost six feet, which, for a woman of that time, was very rare. She was frequently surrounded by four of her ladies, also named Mary, who, as a group, were known as the four Maries. Mary, the queen, enjoyed exercise, in the form of riding her horse – up to three hours at a time – and even playing golf. She would sometimes dress as a man, and with the four Maries at her side, she would venture out among “the people.”

I enjoyed weaving some of the queen’s history through my contemporary book. I couldn’t use everything, but I hope I included some interesting facts. It’s impossible to know if history has been recorded accurately, but my research into Mary piqued my curiosity about other Scottish monarchs and some of their unusual behaviors or attributes.

The real Scottish ruler named Macbeth reigned from 1040 – 1057. Shakespeare wasn’t exactly accurate in his portrayal, but some facts might ring familiar. Macbeth was nicknamed the Red King, likely because of a head full of red hair and a ruddy complexion. At first, he ruled over only a portion of present-day Scotland, becoming ruler by killing the previous ruler. Though little is known of Macbeth’s early life, it is speculated that he was a grandson of Malcolm II (a previous King of Scots). Macbeth probably killed the previous ruler before marrying his widow, Gruoch – they had no children, and there’s no indication she was anything like the Lady Macbeth we’ve come to know.

Macbeth’s reign was mostly peaceful, though in 1040 King Duncan I launched an attack and was killed by Macbeth’s troops. Macbeth succeeded him as King of Alba (ruler of all of Scotland). Macbeth was later killed at the Battle of Lumphanan by forces loyal to the future Malcolm III.

Another female Scottish ruler’s legitimacy was questioned. Margaret, Maid of Norway, was the queen-designate of Scotland from 1286 until her death in September of 1290. She was never inaugurated, though it’s not clear why; possibly an attempted change in the idea of how Scotland was to be ruled, possibly because of concern about her being from Norway. Her status as monarch is debated by historians. She died after a journey over the sea. It was probably food poisoning that did her in, but wouldn’t it be great to have an accurate record of exactly why her position as monarch was never solidified? There’s a bit of suspicion about her life and death, but not as much as my questioning mind would like. It was a long time ago, I suppose.

One of my favorites is Robert I, or Robert the Bruce. Talk about a history. He packed a lot into fifty-four years of life. He is the ruler, a true warrior, who led Scotland during the First War of Scottish Independence against England and is revered throughout Scotland as a national hero. There’s much to know and learn about Robert I but my favorite fact is about his heart.

After Robert I died (maybe from leprosy, but it’s certainly shrouded in some mystery), he was buried in multiple places, but his heart was placed inside a metal urn to be worn around the neck of Sir James Douglas, who promised to take it to the holy land. Unfortunately, Sir Douglas never made it that far. He took a detour to fight the Moors in Spain, where he was killed. However, before he died, he reportedly threw the urn containing the king’s heart and yelled, “Lead on brave heart, I’ll follow thee.” A team of archeologists found the urn in Spain in 1921 and it is now interred in Melrose Abbey.

Robert the Bruce was the original “brave heart.” Or that’s just a very good story.

Even though history might not have been recorded as well as we would like, there’s much to know about Scotland and its rulers. I’ve barely scratched the surface, but I’m hooked. Mary, Queen of Scots will always be my favorite. She was fierce – and power-hungry forces fought her fierceness until they, unfortunately and ultimately, won.

However, she will always be my brave heart. May she lead on, wherever she is.

Paige Shelton had a nomadic childhood as her father’s job as a football coach took the family to seven different towns before she was even twelve years old. After college at Drake University in Des Moines, Iowa, she moved to Salt Lake City where she thought she’d only stay a few years, but she fell in love with the mountains and a great guy who became her husband. After a couple of decades in Utah, she and her family recently moved to Arizona. She writes the Scottish Bookshop Mystery series, which begins with The Cracked Spine. Thin Ice is the first in a new series.