As hiding places went, you could do worse than the Village on a rainy Tuesday night.

The bartenders at McSorley’s Old Ale House, on East 7th Street, liked to point to the dusty wooden chair tied to the ceiling and claim Abraham Lincoln had sat his bony ass in it a hundred years ago. It was just one of three-dozen historical souvenirs bolted, nailed, or roped to the bar’s time-darkened surfaces, including ten dusty wishbones on a string above the bar, left behind by boys bound for France in World War I.

Miller cared nothing about history. He just wanted McSorley’s fine ale in his stomach. It was a small reward for a messy victory. The take from the amusement park had come to five thousand dollars in small bills, a solid haul until he added up his expenses. Five hundred to Jonsey, the aging safecracker who sniffed out the score. Another fifteen hundred combined to the gun guy and the wheels guy. The remaining money, stashed under the floorboards of his apartment, would last for five months. Maybe longer if he kept his worst habits in check.

He had a lot to drink about. According to the newspapers, the clown had died instantly. Miller saluted the air with his beer glass. It’s a hard world for the little guys, especially those who wear a red nose to make a living.

Soon it was seven, one of McSorley’s quieter hours. The businessmen had cleared out after a beer or four, headed for the trains that would take them back to the suburban houses they quietly despised. It would be another hour or two before the first hipsters and poets and pin-jabbers and dodos, the folks who gave the Village its special flavor, drifted through the doors. From his chosen table against the bar’s rear wall, Miller watched the professional drinkers clustered at the front tables, their heads wreathed in cigarette smoke. At the bar, a lone man stood with his back to Miller, peering out the rain-speckled windows at the colorful smears of passing cars.

Something aside from the dead clown was bothering him. After a bad job, he never had more than three beers. Hell, rarely more than two. Yet here he was, five pints in, which he took as a signal his mind was trying to slow down and work something out. But what?

Was he worried about his former partners? No. The newspapers, after mentioning the tragic obliteration of the guard’s kneecap and the clown’s head, had breathlessly described Bernard and Trent shooting their way through a police roadblock and escaping. But neither of them knew Miller’s real name or where he spent his time.

No, his mind kept returning to gloves. Black leather gloves, so thin he could pick up a dime while wearing them. The kind he preferred on a job like the amusement park. He was diligent about slipping on the gloves hours before a score went down, and not removing them until after the escape. It wasn’t the kind of detail he would overlook.

Except now, as he relived those frantic five minutes in the money room, he wondered whether his gloves had stayed on. He took pride in keeping everyone as calm as possible during a robbery, but Bernard and Trent had screamed and waved their weapons like amateurs, distracting Miller at a crucial moment. The lid on one of the money drawers had stuck, the key kept slipping from his grasp, and so he had…

…stripped off his left glove. Just for a second, so he could open the drawer. Had he wiped the metal down after clearing out the cash and putting the glove back on?

He had no memory of doing so.

Miller had only done one brief stint on a prison farm in Texas, on a trumped-up weapons charge, but that was enough to put his fingerprints in a file with his real name on it. Although he had changed identities five times in the nine years since that stint, he was in deep trouble if the cops ran any fingerprints from the money room against their files.

They would try to pin the death of that clown on him.

One of the bartenders wandered over. “Want another, brother?”

No McSorley’s ale in prison, Miller thought. “Sure.”

“On the house.” The bartender wore a white jacket with long sleeves, which contrasted with his deeply tanned and lined face. A pink scar ran up the left side of his neck. “Listen, the one fancy-pants fellow standing at the bar…”

“He’s got a ventriloquist’s doll with him. Makes it talk every time he orders another beer, too. And he keeps ordering beers, otherwise I’d have kicked him out a long time ago. I already got poets in here shouting about Moloch and Carl Solomon, getting gowed up in the shitter.” The bartender stepped aside so Miller could have a better look at the man, who had shifted so he faced the bar instead of the window. Beside the man’s half-empty beer glass sat the doll, dressed in a tuxedo, its glass eyes reflecting the bar’s yellowish light.

“I thought you should know. Be back with that beer.”

Miller nodded his thanks. Under ordinary circumstances, he was good at sensing when someone was observing him. Yet he had been so preoccupied with the possibility of fingerprints he had missed a stranger glancing his way in an almost-empty bar. A stranger armed with a ventriloquist’s doll.

Who knew what terrible things someone with a ventriloquist’s doll was capable of?

The bartender retreated behind the bar to fill a new glass, and the man with the doll turned to face Miller. He had a round face and an expensive haircut that was growing unruly at the edges. He wore a white dress shirt with the sleeves rolled up, and a pair of black suit pants too tight for his legs.

When the man met Miller’s gaze, he picked up the doll in one hand and his beer in the other. Miller slipped a hand into his coat pocket and cupped the .25 pistol he kept there.

The man stopped a few feet from Miller’s table, the doll cradled in his left arm.

“No, you don’t,” the man replied, in a jocular voice that reminded Miller of a radio host.

The dummy in his arms opened its wooden jaws and rasped, in an accent fit for the Queen’s tea table, “But buddy, do I know you.”

“Best if you leave, Jeeves.” Miller told the doll, before shifting his gaze to the man. “And take Bertie Wooster here with you.”

“Ah, a man who reads,” the doll responded.

The pasty man jutted his chin at Miller’s pocketed hand. “I’d love to take something out to show you. I’ll do it slowly, so you don’t decide to ventilate me with whatever cannon you got tucked in there.”

With a theatrical sigh, the man placed the doll on the sawdust-coated floor. Reaching into his tight pants, he extracted something small and placed it on the table in front of Miller. It was a bullet with a dimple in the primer, from a misfire.

“From my employer, Mister Redfield,” the man said, enunciating ‘Mister Redfield’ with a hammy glee. “It’s very valuable to him, for reasons I’m sure you remember. He’d like to see you.”

Miller picked up the bullet and rolled it between his fingers, studying the dimple. Memories of a sweaty night in New Orleans, the dark thrumming with insects, the smell of blood salty in the air. “What if I say no?”

Draining his beer, the man slammed his empty glass on Miller’s table before bending to retrieve the doll. “You won’t,” he said, slipping a hand into the doll’s back and standing again. “He informed me that you always pay a debt.”

“Yeah? This is the payback?”

“Yes. He says he needs protection.”

The doll spoke in thickest cockney: “Protection from dangerous men.” 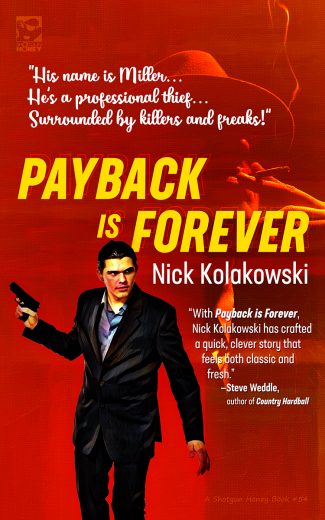 About Payback is Forever by Nick Kolakowski:

Miller thought it was the perfect heist: Five minutes to hit the cash room of an amusement park, then another two minutes to the getaway car, then gone. As a professional thief, he’d done jobs like that dozens of times. But Miller’s partners had other ideas. When things go bad and bloody, Miller is forced to flee back to familiar territory: New York City’s West Village, where even the target of a nationwide manhunt can hide out amidst the freaks.

But Miller’s refuge might prove even more dangerous. Approached by an old friend about a shady protection job, Miller finds himself thrown into a bizarre world of pint-sized gangsters, aging war criminals, and shady government agents… all of whom are pursuing a prize beyond imagination.