Poison has always been described as a woman's weapon, with shameful and cowardly connotations. It's time to put an end to that stigma and give poisoning the credit it deserves.

My book, Milady, is a new take on The Three Musketeers—with the story told from the point of view of literature’s most notorious villainess, Milady de Winter. In Dumas’ tale she’s harshly condemned. But in Milady, we see another side to her story and realize the Musketeers were the villains all along. Despite her virtues, though, Milady is still a spy, assassin, seductress… and poisoner.

Catherine de’ Medici set the trend, killing her religious and political rival with a pair of poisoned gloves. (Possibly—you know how history treats strong women.) Shakespeare had six poisonings in his plays—five by women. Since then it has been echoed by everyone from Sherlock Holmes to Game of Thrones: poison is a woman’s weapon.

More than that, it is usually portrayed as a shameful, cowardly way to kill someone. Why is that? Because historically, that’s what the people in power want you to think.

People in power are always on the lookout for the moment when the powerless have finally had enough. Poison is a threat to the status quo. It is a threat to hierarchy and patriarchy. It is a way any subjugated woman or downtrodden peasant can strike back at their masters. (Though the wealthy had a habit of accidentally poisoning themselves anyway.)

Poor people couldn’t spend their youth taking fencing lessons, and they couldn’t spend their limited wages on a sword or dagger. But for a few pennies, they could buy rat poison. Historically, women couldn’t be lawyers, jurists, or judges to find someone guilty. They could rarely divorce. But they did have access to all the food eaten by the men who controlled them.

In the original book, it is implied that she poisoned her husband. She also sends poisoned wine to D’Artagnan and his friends. (He did rape her by subterfuge, don’t forget.) And finally, she poisons Constance, the married woman seduced by D’Artagnan.

In my take on the story, Milady learns about poisons at her mother’s knee. Only, she doesn’t realize she’s learning about poison. In a time when doctors were few and clueless, when clysters and leeches were the remedies of choice, women tended to their families with herbs. When Milady learns what can cure, she also learns what can kill. A little foxglove can treat congestive heart failure. A bit more can stop the heart.

Women shared knowledge of what could cure a baby’s croup as much as they shared potions that might encourage or stop a pregnancy, or perform that time-honored task of “killing vermin.” Later in life, Milady puts that innocently acquired knowledge to good use.

I certainly don’t advocate murder as an instrument of social change. But when murder is committed with that end in mind, poison levels the playing field, allowing physically weaker, socially repressed, and economically limited people to take illegal and deadly action as easily as one aristocrat challenging another to a fatal duel.

(Author’s note: If you are poor, subjugated, fed up with the status quo, feel like your rights aren’t being safeguarded, please don’t poison anyone! Take legal action. Vote. Volunteer. Be active in politics. Rant and rave and sue! Because we’re not in the 17th century anymore. Er… right?) 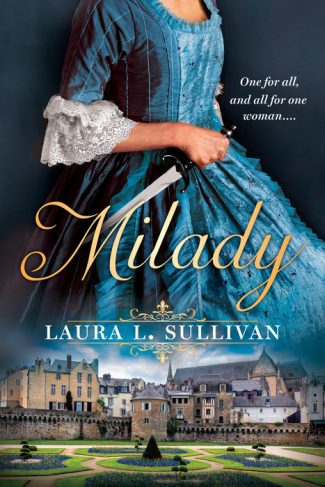 From the glittering ballrooms of 17th Century England to the dangerous intrigues of the French court, Laura L. Sullivan brings an unlikely heroine to the page, turning on its head everything we’ve been told about The Three Musketeers and their ultimate rival.

I’ve gone by many names, though you most likely know me as Milady de Winter: Villainess. Seductress. A secondary player in someone else’s tale.

It’s finally time I tell my own story. The truth isn’t tidy or convenient, but it’s certainly more interesting.

Before you cast judgment, let me start at the beginning, and you shall learn how an innocent girl from the countryside became the most feared woman in all of Europe.

Because we all know history was written by men, and they so often get things wrong.

Comment below for a chance to win a copy of Milady by Laura L. Sullivan!

Milady Comment Sweepstakes: NO PURCHASE NECESSARY TO ENTER OR WIN.  A purchase does not improve your chances of winning.  Sweepstakes open to legal residents of 50 United States, D.C., and Canada (excluding Quebec), who are 18 years or older as of the date of entry.  To enter, complete the “Post a Comment” entry at http://www.criminalelement.com/5-reasons-why-women-are-killing-the-suspense-game/ beginning at 10:00 a.m. Eastern Time (ET) July 2, 2019. Sweepstakes ends at 9:59 a.m. ET July 16, 2019. Void outside the United States and Canada and where prohibited by law. Please see full details and official rules here. Sponsor: Macmillan, 120 Broadway, New York, NY 10271.

Laura L. Sullivan is the author of five books for middle grade and young adult audiences. This is her adult debut. She lives in Florida with her son.