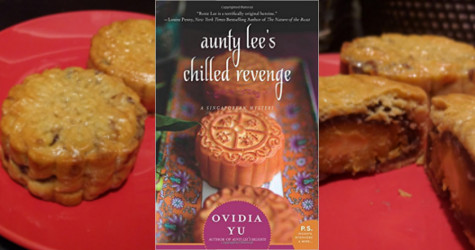 The 3rd novel in Ovidia Yu’s Singaporean mystery series finds Aunty Lee laid up with a sprained ankle and, therefore, grumpy at the curtailment of her ability to lovingly interfere in the lives of others. To make matters worse, her overbearing stepdaughter-in-law has decided to “help” Aunty Lee run her cafe while she’s healing, which is spreading the grumpiness to Aunty Lee’s actual helper, Nina. Then, Cherril, Aunty Lee’s business partner, decides that the cafe needs to expand its horizons, talking of mechanization and globalization, much to Aunty Lee’s discomfort.

All Auntie Lee wants to do is cook good food that will nourish people’s bodies and, hopefully, souls, and she doesn’t believe a machine will be able to properly adjust for tastes the way she can.

Feeling sidelined and dangerously close to obsolescence, Aunty Lee is happy to be distracted by an old scandal rearing its ugly head. Allison Love, a British woman who was cyber-bullied out of Singapore five years ago for purported animal cruelty, returns to the island nation to sue the animal welfare group with which she had been at odds. To Aunty Lee’s delight, her cafe has been chosen as neutral territory for a meeting between Allison and the three remaining prominent members of the group.

However, Allison’s sister, Vallerie, shows up in her stead, right before Allison is found murdered in her hotel room. Aunty Lee finds herself plunged into the thick of investigating Allison’s murder, as she takes a frightened (and honestly rather frightful) Vallerie under her wing.

Aunty Lee’s Chilled Revenge definitely has the most sophisticated murder mystery plot construction of the series so far. I thought I’d figured it out halfway through, so I was pleasantly surprised to find that I hadn’t—even as I thought the denouement a bit rushed in its depiction; a pity for a book so delectably paced otherwise.

As usual, Aunty Lee is very much the star of the show in her wisdom and kindness, even with her flaws. I also greatly enjoyed the relationship between Aunty Lee and Commissioner Raja, and am hoping it blossoms into exactly the kind of thing their (step)children are hoping won’t happen.

And ooh, the descriptions of food! I especially enjoyed the many different kinds of mooncakes described, and was very pleased to try my hand at the traditional mooncake recipe included:

8 salted duck egg yolks (Be sure you buy salted duck eggs and not fertilized duck eggs, which are a delicacy elsewhere in Asia but would be unsuitable and possibly shocking here. Remove whites, rinse yolks, coat yolks with peanut oil and steam for about 10 minutes over low heat. If translucent, the yolks are still raw. They should be yellow gold and crumbly.)

½ teaspoon of Lye water (This alkali solution is what puts springy chewiness in egg noodles and Japanese ramen. You can make a baking soda substitute—boil 1 teaspoon of baking soda in 4 cups of water for 5 minutes and use when cool.)

Flour for dusting surfaces and molds

Sift the flour, salt, and baking soda into a bowl. Make a well in the center.

Whisk together the golden syrup, Lye water, and peanut oil in a separate bowl (the mixture will not be homogenous). Pour slowly, stirring the liquids into the flour, forming a dough. Gently knead this until it comes together in a lump. Cover and set aside to rest for two hours. Drain the canned lotus seeds and place them in a food processor with sugar and a tablespoon or two of water and blend until smooth.

Transfer to a pan and stir over medium heat until the puree thickens.

Add the peanut oil and continue stirring until the lotus puree forms a glossy dough that leaves the side of the pan. This should take about 5 minutes.

Remove from heat and set aside.

Preheat your oven to 350 degrees.

Gently knead the rested dough mixture. Divide into 8 balls and place on a floured tray.

Roll the lotus paste into a long tube and cut into 8 pieces.

Press each egg yolk on a cushion of lotus paste and form a ball around out.

Roll and flatten (or flatten with your palm, village style!) a lump of dough and wrap it around a ball of lotus paste (thinner skins are considered more elegant, but thicker skins are easier to work with), and press the edges together until the filling is sealed in. Some people prefer to roll out two small balls of dough, wrapping one around the filling and the second over it in the opposite direction. Place your mooncakes on a parchment-lined baking sheet. When you’re finished forming the mooncakes, bake in your preheated oven for 8 minutes.

Remove the mooncakes from the oven and glaze the tops and sides with egg wash.

Return the mooncakes to the oven for another 10 minutes or until golden brown on top and fragrant.

Now comes the hardest part. You have to wait two days for your mooncakes to reach their prime! After your mooncakes cool completely, store them for at least two days in an airtight container to “return oil” from filling to skin. This will make the skins shiny and soft and the fillings less oily. This recipe was definitely one of the most exotic I’ve tried my hand at so far, particularly in terms of sourcing ingredients. I used the baking soda substitute for lye water, using a quarter teaspoon in a cup of water because the recipe only calls for half a teaspoon of the resulting mixture, and what on earth would I do with all that lye water otherwise? And, while I didn’t have any trouble ordering (inexpensively!) golden syrup and mooncake molds online, I was thoroughly defeated in my search for lotus seeds, both online and in the American and Asian supermarkets that I visited. I used sweetened red bean paste for the filling instead, which I vaguely remember from growing up as being an acceptable substitute.

And, I must say, these mooncakes were a lot of fun to make! I am not the most artistic person, so it was very satisfying to use these fun molds to make pretty patterns on the dough. Granted, my ability to cover the fillings with an even layer of pastry was extremely hit or miss, but I think they came out, for the most part, looking alright.

As for the flavor…well, I have to admit that mooncakes were never my favorite dessert, and this recipe hasn’t changed my opinion. My brother, who enjoys mooncakes, loved this very much, but I tend to prefer desserts with more pastry and less filling. I really, really enjoyed the juxtaposition of salted egg yolk to sweet red bean paste, however.

Overall, this was the kind of thing I’d make for a special occasion. It’s a great recipe, though: written in as entertaining and chatty a manner as you’d imagine Aunty Lee would explain it to you. I’m actually pretty sad that this is the last Aunty Lee book to date. I’m eagerly anticipating the next one!