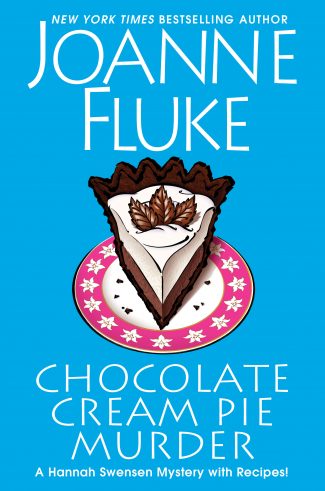 Chocolate Cream Pie Murder is the next mystery in Joanne Fluke’s Hannah Swensen Mystery series. In only weeks, Hannah Swensen goes from idealistic newlywed to betrayed wife, and meanwhile, a deadly mystery unfolds in Lake Eden.

“Sit down, Hannah,” Mike instructed, gesturing toward the couch. “Mayor Bascomb called me and he wanted me to get in touch with you immediately. He said he tried to call you, but he couldn’t get through. That’s one of the reasons I asked Earl to lead us out here.”

Hannah drew a sigh of relief. At least Mike’s important news didn’t involve Ross! “What did the mayor want, Mike?”

“He said he got a call from the head of programming at KCOW-TV this morning.”

Mike nodded. “Yes. He said it was important and then he asked me if I could contact you. That’s one of the reasons I came out here with Michelle and Lonnie.”

“What did Mayor Bascomb want?”

“He wants you to host a series of interviews to be filmed at The Cookie Jar.”

“It is and that’s not all. KCOW is going to rerun the movies that are set in Minnesota at a Minnesota Movie Festival. And the festival will be held right here in Lake Eden. The mayor wants to know if you’ll agree to host those interviews or whether you’d rather not do it. He also asked me to remind you that having KCOW-TV’s movie festival here would do wonders for the businesses in Lake Eden.”

Hannah began to smile. “Of course I’ll do it. It should be fun.”

Mike held up his hand. “Don’t jump in quite yet, Hannah. I’m supposed to tell you that KCOW-TV is running a marathon of the movies right before the festival, and they’re going to ask their viewers to call in and say which movie they liked best.”

“Oh.” Hannah felt her anxiety begin to grow. “Are they going to run Crisis in Cherrywood?”

“Yes, they are. And they’re going to invite all the movie producers, including Ross. They got his number and called him this morning.”

“Ross wasn’t there. His wife answered the phone and they left a message for Ross to contact them.”

Hannah swallowed again, this time with difficulty. “Do you think Ross will actually come here to Lake Eden to be interviewed?”

“Your guess is as good as mine, Hannah.”

Hannah did her best to stay calm. “What if Ross comes here for the interview?”

Mike shrugged. “If Ross shows up here, it won’t be pretty. I heard some people at church talking about what they’d like to do to him. Nobody in Lake Eden likes him now. As a matter of fact, some people actively hate him for what he did to you.”

“I know, but do you think anyone would actually do anything to . . . to hurt Ross?”

“What do you think they’d do?” Hannah held her breath, waiting for Mike’s answer.

“They might fight with him, punch him a couple of times for hurting you.”

Mike thought about that for a moment. “Maybe, but I doubt that it would go that far.”

Hannah drew a relieved breath. “That’s what I thought. Do you think someone should warn Ross that he might get hurt if he comes back here?”

“Yes.” Mike gave her an assessing look. “Do you want his home number so that you can warn him?”

“No! I meant what I told you the last time we talked about Ross. I never want to speak to him again!”

Hannah gave a little nod. “Yes. That would be best, Mike. And it might be best to do it in an official capacity and not as my friend. That way your warning would carry more weight.”

“I agree. I’ll call him from the sheriff’s station as soon as this storm stops.”

Hannah was so grateful, she felt like throwing her arms around him and giving him a big hug. “Thank you, Mike,” she said instead. “It’s not really Ross that I’m worried about. It’s just that I’d hate one of my friends here to get in trouble for fighting with Ross . . . or even worse.”

“I understand.” Mike glanced over at Lonnie and Norman to see if they were listening. Then he turned back to Hannah. “You still love Ross, don’t you.”

It was more of a statement than a question, and Hannah knew she had to be honest. “It’s hard to stop loving someone, even when you know it’s impossible. I still love Ross and I wish that things could be different, but I know I can’t ever be with him again.”

Mike reached over to pat her shoulder. “I know what it’s like to love someone and wish that things were different. I still feel that way about my wife. It’s been three years and every now and then, I wake up in the morning and turn over to hug her. And then I realize that she isn’t here anymore.”

Hannah felt the urge to hug him again, but patted his hand instead. “I’m so sorry, Mike. I guess you never quite get over something like that.”

“You’ll never forget it, but you have to put it behind you, Hannah. I have. There’s a future out there for both of us.”

“You’re right, but I’m not sure how to put it behind me.”

“I can’t be sure that my way will work for you, but I’ll tell you what works for me. I keep busy, I have my work, and I have my friends. Try keeping busy at work and enjoy your friends. Don’t dwell on it and keep actively involved in your life. You can get over this, Hannah. You’re a strong woman and I know you can.”

“We’re talking about Ross and how he might be coming back to Lake Eden,” Mike replied.

Hannah turned to Mike. “If you don’t mind, you can tell them about it while I help Michelle in the kitchen.”

Mike patted her shoulder again. “Go ahead. You probably need a break. And besides, I’m getting really hungry.”

Hannah laughed and got up from the couch. She heard Mike start to tell Lonnie and Norman what Mayor Bascomb had told him, and she escaped to the kitchen.

“What did Mike want?” Michelle asked when Hannah came through the kitchen doorway.

Hannah knew she needed a few moments to compose herself before she told Michelle the news. “Let’s get dinner all ready to go and we’ll have a cup of coffee while I tell you about it. Do we have anything for a salad?”

“Yes, and it’s in the refrigerator. You had a big package of fresh baby spinach and some cooked bacon. I just whipped up a sweetened cream dressing and put it in the bottom of your salad bowl. Then I washed the spinach and put it on top of the dressing. I gave the bacon a little more time in the microwave to crisp it up, crumbled it over the top, and sprinkled on some chopped red onion. We can mix it up at the table and fill individual salad bowls.”

“Sounds wonderful. You must have been busy.”

“Not really. I still had time to make an appetizer and it’s almost ready to come out of the oven.”

Hannah was amazed. Michelle had wasted no time completing their meal. “I thought you were going to make Mike’s pâté.”

“I did, but I made something else, too.”

“I had Brie in my refrigerator?”

“No, Mother had it in her refrigerator and I brought one of the small wheels of Brie with me.”

“Not exactly. Doc told me to take anything we’d need, that Georgina offered to keep the Red Velvet Lounge open for everyone in the building and the chef agreed to stay, too. Everyone will be eating down there until the storm is over. I found one of Mother’s big grocery bags and filled it with all the stuff I thought we might want, and that’s what I was carrying when I came in.”

“I lucked out with the Ultimate Strawberry Bundt Cake. I had everything I needed in the . . .” Hannah stopped speaking as she realized that her cake was no longer on the cooling rack. “Where is it? I should put it in the refrigerator.”

“It’s in there already. I knew you’d want to frost it and it had to chill first. We’ll let it sit in there until we’re through eating and then we’ll take in the coffee while we frost it.”

“Perfect!” Hannah complimented her sister. “You thought of everything, Michelle.”

“Not quite. I was so busy gathering up groceries, I forgot to bring along the pajamas that Mother said she’d let me borrow.”

“That’s okay. You can borrow a pair of mine. They’ll be too big, but they’ll do as long as you don’t wake up in the middle of the night and go out to the kitchen to make yourself a snack.”

Michelle looked puzzled. “What would be wrong with that?”

“It’ll take two hands to make a sandwich and if you don’t hold on to my pajama bottoms, they’ll fall right off on the floor!”

Comment below for a chance to win a copy of Chocolate Cream Pie Murder by Joanne Fluke!

Chocolate Cream Pie Murder Comment Sweepstakes: NO PURCHASE NECESSARY TO ENTER OR WIN.  A purchase does not improve your chances of winning.  Sweepstakes open to legal residents of 50 United States, D.C., and Canada (excluding Quebec), who are 18 years or older as of the date of entry.  To enter, complete the “Post a Comment” entry at https://www.criminalelement.com/chocolate-cream-pie-murder-new-excerpt beginning at 5:00 p.m. Eastern Time (ET) February 25, 2019. Sweepstakes ends at 11:59 a.m. ET March 11, 2019. Void outside the United States and Canada and where prohibited by law. Please see full details and official rules here. Sponsor: Macmillan, 175 Fifth Ave., New York, NY 10010.