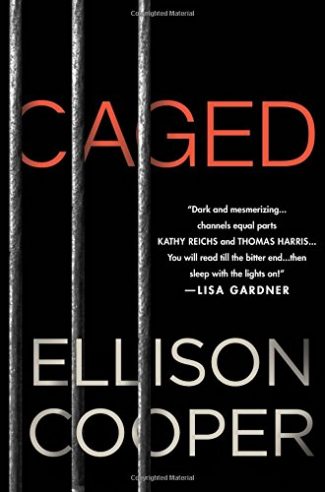 Caged by Ellison Cooper is a debut police procedural and the first in a new series featuring FBI Agent Sayer Altair.

FBI neuroscientist Sayer Altair hunts for evil in the deepest recesses of the human mind. Still reeling from the death of her fiancé, she wants nothing more than to focus on her research into the brains of serial killers. But when the Washington D.C. police stumble upon a gruesome murder scene involving a girl who was slowly starved to death while held captive in a cage, Sayer is called in to lead the investigation. When the victim is identified as the daughter of a high profile senator, Sayer is thrust into the spotlight.

Unlike some corners of southeast Washington, this neighborhood was quiet. Idyllic even.

Wilson and his partner, Mike, sat directly out front of the only run-down place in sight.

Wilson leaned toward the passenger seat to get a better look at the abandoned town house. Boarded-up windows and a rotting front porch were common enough in D.C., but he was sure he recognized the rusty green-and-gold FOR SALE sign hanging out front.

“Isn’t this the same damn house we checked last week?” he asked.

“What?” Mike slumped over his cell phone, still texting his new girlfriend.

“Remember, we came out for that 911 call. Girl all confused, sounded drugged out.”

Mike was the kind of guy who lifted weights obsessively but couldn’t run half a mile. Not the best cop Wilson had ever worked with.

Wilson pulled up the file on the dash computer and read the note he’d written twelve days ago. “Yeah, this is it. Was all quiet when we came by.”

“What’s the call this time?” Mike leaned over to read the computer screen as well.

They both looked back up at the town house. Not a good sign.

Wilson tapped the screen and brought up the 911 call. God love newfangled technology. He hit play and a girl’s voice filled the car.

“Hello?” in a tentative whisper.

“911, what’s your emergency?” the dispatcher barked.

“What’s your emergency, dear?” The dispatcher softened her own voice.

“Where are you, sweetheart?”

A loud sound shook the speakers in the car, and then the call disconnected.

“That a dog barking?”

“Dunno.” Wilson read his own report. The call had come from an old landline that was supposed to be inactive, so they weren’t sure where it originated. This address was as close as they could pinpoint, but they weren’t sure.

Wilson and Mike had knocked repeatedly. Circled the property. Spoke with a neighbor who said the address was empty, no one coming and going. There was no sign of disturbance and the place was locked up tight. Since they weren’t even sure this was the right location, they closed the file. Wilson remembered that had been his daughter’s birthday and he’d wanted to get home to her party.

“Well, damn,” Wilson muttered as he hefted himself out of the car, desperately hoping they weren’t about to find some dead addict. The two cops carefully made their way up the uneven stairs and Wilson banged hard on the door.

As he knocked, the unmistakable stench of dead flesh oozed out around the door.

“You think?” Wilson was about done with his partner. “Call it in, I’m knocking it down.”

While his partner spoke into his radio, Wilson kicked the old door right above the lock. It splintered under his first kick. Despite the circumstance, he couldn’t help but let out a “Yeah!” Kicking down a door could be downright embarrassing when it didn’t budge.

He stepped in and gagged. Though it was a cool spring day, the air trapped in the house felt thick and hot.

Mike stepped in and retched. “Jesus!”

“Don’t puke, man. Step outside if you need to,” Wilson said.

“No way I’m clearing this place. Just call in the wagon.”

“Can’t call it in until we’ve got a body. Could be a raccoon or something.”

Wilson’s entire body tingled with apprehension. Trusting his instincts, he slid his gun from its holster. Mike raised an eyebrow but did the same.

“Hello?” Wilson called out. He swallowed furiously, fighting the urge to gag again.

They fell into a natural rhythm clearing the house. Wilson moved down the dim hallway, head swiveling back and forth. The first floor was empty. The smell grew stronger and became more acidic in the kitchen. Wilson’s eyes watered and he gestured toward a door. Most likely led down to the basement. A shiny new slide bolt stood out against the grimy walls of the town house.

With a nod, Mike slid the bolt. The door swung open and a wave of rancid air ballooned out, enveloping the cops. They both took an involuntary step back and flung their arms up over their noses, guns forgotten.

Through his shirtsleeve Mike called out, “Let’s just get down there and find the damned body so we can get out of here!”

He stepped down onto the first stair, looked down as though he’d just stepped on something, and said, “What the—” at the same moment the shotgun hanging just inside the door went off.

Standing directly behind Mike, Wilson was shielded from the full blast. A few pellets hit his left arm and the left side of his face, but it hit Mike head-on.

His partner screamed in pain and instinctively jerked away. With flesh sloughing away from his face and chest, the muscle-bound cop backed into Wilson and both men toppled onto the floor.