June 30, 2020
Join Leonard Goldberg, author of The Art of Deception, as he discusses originality in writing, noting that many classics such as Jurassic Park were conceptualized well before their authors were born.

Goodness knows how many writers have had their ideas dashed by that comment, which is unfortunate because literally everything has already been written about. Don’t believe me? Well then, let me give you a few bestselling examples, beginning with Lee Child’s Jack Reacher stories. Read the novel Shane (published in 1946) or watch the movies Pale Rider (1985) or The Magnificent Seven (1961) and you will see Jack Reacher on horseback, i.e., lone, brave individuals ride in and dominate evil-doers, then ride off into the sunset. Also keep in mind that The Magnificent Seven is in fact based on the Japanese classic Seven Samurai (1954). And the list goes on, clearly demonstrating there is nothing truly new.

This concept is not limited to crime novels nor warriors-western movies, for it applies as well to internationally bestselling books, such as James Clavell’s Shogun and Michael Crichton’s Jurassic Park. Let us begin with the story of Shogun which revolves around an English pilot whose ship is wrecked on a reef off the coast of feudal Japan. He manages to survive and reaches land where he is taken captive by the ruling samurai. Over time, he learns their language and customs, and eventually becomes a samurai himself and is elevated to the status of being a key advisor to the Shogun, the commander in chief of medieval Japan. What a tale! What a great idea! How did Clavell invent such a wonderful story? He didn’t. He copied the idea, for there was an English sea pilot, William Adams, who was taken captive by Japanese samurai in early 1600. While being held a prisoner, he learned their language and customs, and subsequently became a samurai and an advisor to the Shogun. His adventure was written about under the title Samurai William. Of course Clavell created his own narrative, characters, and events which made for an extraordinary novel, but the idea behind it was not his. Now none of this should detract from how wonderful the book was and how well written. It was the best of all adventures and gave the reader insight into feudal Japan where there was war, love, hate, jealousy, and class distinction, much like our world today. It draws the reader in and doesn’t let go, which accounts for its popularity that continues to this day.

Next, let us turn to Michael Crichton’s Jurassic Park which is one of the bestselling novels of all time. Here we have dinosaurs that return to the modern world and terrorize its human inhabitants. What a fantastic idea! How did he think of it? He didn’t. He copied it. Over a hundred years ago, the great Arthur Conan Doyle wrote a novel revolving around a group of explorers who become lost in the Amazon jungle and eventually come upon a high, hidden plateau which has been unseen and untouched by man. On this elevated plain resides numerous dinosaurs that have survived and flourished for millions and millions of years. The more vicious dinosaurs of course attack and begin to kill the human intruders. Crichton, in his genius, took this idea and made some insightful changes. Rather than having the dinosaurs residing on a hidden plateau, he placed them on an isolated island off the coast of Costa Rica. And he brought them to life using biogenetic engineering rather than having them remain in existence because their breeding ground was on a secluded mountaintop away from all civilization. So, with this information, I think the reader can easily see the striking parallels between the two stories.

Now, I never met nor chatted with Michael Crichton, yet I am more than certain he copied Conan Doyle’s idea. How can I be so sure? Because when Crichton wrote the sequel to Jurassic Park, he entitled it Jurassic Park, The Lost World. And what was the name of Doyle’s novel written over a hundred years ago? The Lost World. Thus I believe Crichton was paying homage to the great Arthur Conan Doyle.

So, the gist of this short essay is not to be dissuaded if someone tells you that your idea has already been written about. Take the idea and install your own narrative, with new events and characters, change the locations and time period, and alter the ending. Then the idea and novel become yours. And if these revisions don’t convince others, you can refer them to this article. If that doesn’t work, resort to quoting Scripture:

What has been done will be done again;

There is nothing new under the sun. 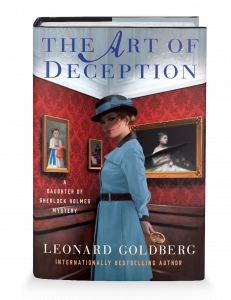 About The Art of Deception by Leonard Goldberg:

In the west end of London, an apparently crazed individual is on the loose, breaking into art galleries and private homes to slash valuable paintings of women. Despite Scotland Yard’s best efforts, the criminal remains at large and continues on his destructive path.

When Joanna and the Watsons are called in to solve the mystery, they soon discover that although the canvases have been slashed, their backings remain pristine, with no cuts or scratches. The criminal, it seems, is no mere vandal—he’s searching for something hidden behind the portraits.

Suspicion soon falls on two skilled art restorers who previously worked at the gallery where all the vandalized art was purchased. When Joanna finds the body of one in a bricked off fireplace at the gallery, the other is left as the prime suspect. But then he’s discovered dead as well. Luckily, Joanna has a plan for ensnaring the criminal once and for all. But it must not fail, or more paintings—and lives—will be lost.

Leonard Goldberg is the USA Today bestselling author of the Joanna Blalock medical thrillers. His novels have been translated into a dozen languages and were selections of the Book of the Month Club, French and Czech book clubs, and The Mystery Guild. They were featured as People’s “Page-Turner of the Week” and at the International Book Fair. After a long career affiliated with the UCLA Medical Center as a Clinical Professor of Medicine, he now lives on an island off the coast of Charleston, SC.