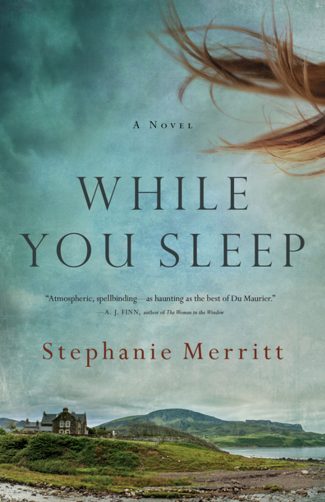 While You Sleep demands close attention to every detail because so many elements verge on the supernatural, the questionable, or the stark “you must be mistaken about that.” Zoe Adams has traveled alone from Connecticut, in October, to be the first tenant of the remote, newly-renovated McBride house. The house is five miles from a little town that is the entryway to a nameless Scottish island. It’s not especially picturesque: “the ferry terminus hardly warranted the name; there was a car park and one, low, pebble-dashed building, the word ‘Café’ flaking off a sign above the door.” She’s met at the ferry by her landlord, Mick Drummond, who insists that she come by his pub: he’ll not take no for an answer. It’s the last thing Zoe wants: she’s looking for anonymity, privacy, and a quiet place to paint.

But it had been naïve, she now realised, to imagine that a newcomer to a small community, out of season, would not immediately become a subject of gossip and speculation. If she was going to stay here a few weeks, it would be wise not to offend the locals on day one.

Zoe tells Mick that she has a family connection to Scotland and that she loved all the tales of “Selkies and giants and whatever” her grandmother used to tell. That makes Mick nervous.

‘As long as you know that’s all they are. Bit of fun. Tease the incomers.’ Mick smiled back, but he did not look reassured. ‘Come on then, you must be gasping for a drink.’

‘Tease the incomers,’ is it? Everyone Zoe meets alludes to strange tales about the house she’s renting. Edward, a young fiddle player/teacher and an elderly bookshop owner, ‘Professor’ Charles Joseph, seem particularly knowledgeable.

The prologue of While You Sleep is a blueprint of Zoe’s traumatic first 24 hours in the McBride house.

It begins, they say, with a woman screaming.

You can’t tell at first if it’s pleasure or pain, or that tricky place where the two meet; you’re almost embarrassed to hear it, but if you listen closer it comes to sound more like anguish, a lament torn from the heart: like an animal cry of loss, or defiance, or fury, carried across the cove from cliff to cliff on the salt wind.

If you stand on the beach with your back to the sea, they’ll tell you, looking up at the McBride house, you might catch, behind tall windows on the first floor, the fleetest shift of a shadow.

She was stripped naked and laid across a low couch in the long gallery that ran the length of the house on the west side, facing the sea. Both arms were stretched above her head and pinioned so that she could not move them.

Despite the apparent helplessness of her position, she was not afraid; instead she felt an unfamiliar boldness, a pleasure and pride in her own body that made her want to arch her back, display her for him.

She wakes up, “feeling disorientated and raw,” actually “lying on a couch in the long gallery.” Zoe also senses she’s being watched (she thinks) by someone on the beach. She heads to town to get the murmurs about her rental house fleshed out. The locals tell her a stark tale: “A century ago, a young widow and her son died mysteriously there; just last year a local boy, visiting for a dare, disappeared without a trace.” The details paint a more complicated tale. Ailsa (née Drummond) McBride was a wealthy woman who lived alone after her husband drowned. She had a child out-of-wedlock, shockingly out-of-the-norm for the time. Legends grew up around Ailsa: it was said that, “the isolation drove her to madness.” But was she mentally ill or was it something different? Professor Charles proffers an alternative theory.

‘Silence and solitude have very particular effects on the brain. It’s more akin to the experience of religious mysticism. Or, conversely, what we might call being haunted.’

Zoe stared at him. ‘You’re saying – people might have thought Ailsa was crazy, and she maybe even believed she was being haunted, but really she was just suffering scientifically proven effects of isolation?’

Charles’s answer, ‘I’m offering up one explanation,’ is as dissatisfying for the reader as it is for Zoe. She presses Charles harder because “bad vibes” doesn’t even come close to describing her other-worldly experiences: is she being manipulated? Charles said to Zoe the first night they met that “everyone who comes here is running away from something.” Do she and Ailsa share that? What else do they have in common? Zoe asks Charles if “a place can retain memories of events?”

‘Absolutely.’ Charles put his cloth down and leaned against the sink. ‘You’ve heard of the genius loci, of course—the Roman belief in the particular spirit of a given place. The fact that it’s become a metaphor now doesn’t make it any less true.’

Zoe is an unreliable narrator, but then who isn’t? Everyone gives her a small piece of the puzzle, but the snippets are not necessarily accurate. It seems the town has a vested interested in her believing that the incidents she’s experiencing are only connected to the distant past. She thinks the events that are ratcheting up prove that someone(s) wants to stop her inquiries and questions. It’s time to reference Richard Pryor’s signature line, “Who you gonna believe, me or your lying eyes?” Zoe would add lying ears and nose to that prescient quip as she is repeatedly assaulted with things that just don’t add up.

Her mind is flooded with swirling questions and explanations: Has she been visited by an incubus? Is the McBride house situated on land that pre-dates Christianity? Every theory makes her wonder about the similarity of her experience and the woman who lived all alone in the house. Is Zoe being haunted or is she a little crazy: is the truth that “she should never have come here?” The title is a misnomer because you won’t be able to sleep until you’ve laid bare every mystery of While You Sleep.