May 25, 2021
In David Housewright's next novel featuring the beloved Rushmore McKenzie What Doesn't Kill Us—McKenzie has been shot and lies in a coma while the police and his friends desperately try to find out what he was doing and who tried to kill him. 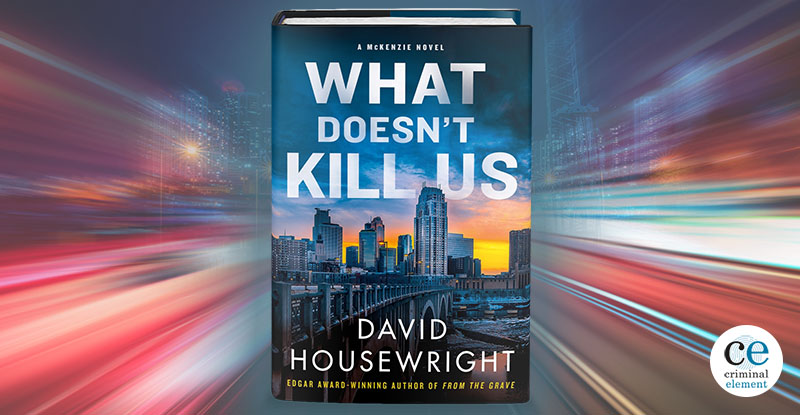 What Doesn’t Kill Us—David Housewright’s latest McKenzie mystery, the 18th in the series—opens with quite a shocker: our hero has been shot in the back and lies in a coma.

McKenzie’s friends, reeling from the news, have plenty of questions they need answered in a hurry. The unlicensed P.I. never officially took on cases since his retirement from the St. Paul Police Department; nowadays, he just does “favors” for friends. So which friend was his current favor for? What brought him to that questionable bar in a bad part of town?

And just who got the drop on Rushmore McKenzie and put a bullet in his back?

…In any case, there was nothing I could have told the cops. I did not see who shot me. I did not know why I was shot. Hell, I was as surprised at being shot as the woman who screamed when the bullet spun my body against hers.

Eventually, I would piece the entire story together; my friends related bits and pieces to me while I was recovering. Apparently, I have more friends than you can shake a stick at. Who knew? Their stories began where mine ended, so to speak.

They began with the scream…

It’s a motley crew, and each one has their own methods and means of getting answers. Answers involving an ancestry website and unexpected DNA test results, a local family of tech millionaires, shadowy stock market trading, and a ring of opioid dealers. The ways in which everything connects are convoluted enough to surprise even McKenzie…

And in true neo-noir fashion, there are plenty of nasty characters uncovered along the way, too:

“…We interviewed the people who worked for him. At first we got the usual answers, especially from the men—he was a nice guy, a demanding but fair boss, and so on and so forth. The more we pressed, though—it turned out that he was a lying sonuvabitch who had been abusing his female employees for years, especially the young, single, and vulnerable women; blackmailing them, forcing them to exchange sexual favors for their jobs…

“I think Gerald King was executed by one of his vics or someone close to one of his vics and his body was disposed of, probably in Lake Superior. …I would have closed King’s case twenty years ago. That’s what I told McKenzie. I also told him that I didn’t particularly care one way or the other. Not then and not now. I know I’m supposed to care. Care deeply. You can’t choose the victim; one of the first things they teach you at the academy. The law works for everybody or it doesn’t work for anybody. But of all the murders I caught and haven’t solved—I promise I don’t lose sleep over this one.”

Housewright, an Edgar Award winner and former president of the Private Eye Writers of America, continues to impress. Eighteen books in, his Minnesota-set neo-noir McKenzie series has yet to get stale or tired—in fact, What Doesn’t Kill Us feels wonderfully fresh, thanks to the drastic narrative change-up.

McKenzie is still a vital part of the story, popping in from time to time with his own asides, still narrating sections from his first-person POV—

Okay, I’m going to tell you about my dreams now. Is there anything more boring? It’s like a guy coming up to you and saying, “I’m going to tell you a fantastic story about something that never happened and doesn’t have a point.” Why would you listen to that if you weren’t being paid? In any case, I promise that this has nothing to do with the narrative. It’s what Elmore Leonard called “Hooptedoodle.” Feel free to skip ahead…

—but shifting the focus to the cheeky investigator’s friends and cohorts makes for some intriguing new details and perspectives. This time, the supporting cast gets a chance to take center stage, and the result is a rousing whodunit easily devoured in one or two sittings.

And thanks to the length of the series, there’s a colorful roster of past characters Housewright can pull back into the present story. It’s such fun watching criminals and cops alike dig into the details surrounding McKenzie’s shooting, as so many of his previous favors/cases come back into play. Who’s going to find the vital last clue first? Who’s going to ultimately catch the culprit? (Housewright delivers a climax that’s as entertaining as the lead-up, one that delights rather than disappoints.)

The McKenzie series is one I love to recommend to friends and strangers alike. There’s a delicate balance of darkness and humor in every volume, and What Doesn’t Kill Us is no exception. There are femme fatales, bad dudes, and plenty of noir sensibilities, yes, but it never gets too grim or brutal thanks to the snarky characters—there’s a great riff of “Who’s on first?” between Shipman and McKenzie’s security pal buddies, Smith and Jones—and the promise that, ultimately, “good” will end up triumphing. And the mystery itself is layered enough that even experienced armchair sleuths will be hard-pressed to 100% accurately predict the full reveal. There’s no sign Housewright will be permanently retiring McKenzie any time soon, thank goodness, and I’m already eagerly anticipating the nineteenth installment in this thoroughly solid neo-noir series.