Book Review: Unto Us a Son Is Given by Donna Leon 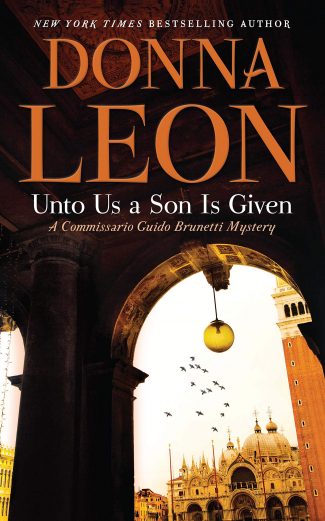 Unto Us a Son Is Given

Unto Us a Son Is Given is the twenty-eighth novel in Donna Leon’s best-selling mystery series. The apparent indiscretion of an elderly family friend involves a reluctant Commissario Guido Brunetti . . . until the sudden natural death of his friend sets in motion a murder.

Each Donna Leon novel I read is a gift. That being said, Leon has blessed me now with the gift of 28 novels in the terrific Commissario Guido Brunetti series. This recurring set of novels may very well be the finest and most humane in all of the overcrowded mystery genre. She finds a way to get to the core of every human being she writes about and highlights their complexities and moral struggles and examines this through the choices they make.

The Temptation of Forgiveness.

What is the most underrated yet powerful part of each Leon novel is the city of Venice—which plays its part almost like another living, breathing character, as instrumental to the plot as any of the flesh and blood characters who drive the narrative. Unto Us a Son is Given is no different from the high-level quality Leon’s readers have gotten used to. It is also important to include that her writing is so accommodating a reader can dive right in without having read prior novels in the series and still be able to fully enjoy the story.

At the beginning of the novel, Commissario Brunetti is approached by his father-in-law, Il Conte Falier, who seeks his help with a very personal matter involving a close friend of his. To say Brunetti and his father-in-law had a difficult relationship would be an understatement. However, Il Conte fully supplicates himself to Brunetti’s experience as an investigator and urges him to intervene in the situation that is troubling him. Il Conte Falier’s close friend, a man of Spanish descent named Gonzalo Rodriguez de Tejada, is an openly homosexual man in the twilight of his life who appears on the verge of making a seemingly bad decision. Feeling that he will die without any love in his life, Gonzalo has indicated he is considering adopting a much younger man who has had relations with in order to be able to bequeath him his entire estate as written under Italian law.

Brunetti starts with the person he trusts the most in matters that require intricate electronic investigation as well as the highest level of discretion, his boss’s Executive Assistant, Signorina Elettra. Loyal readers of the series will also smile as the regular undercurrent of sexual tension is always present between Brunetti and the beguiling Elettra. He needs her to look into Gonzalo’s background to find out what may be driving his decision to ‘adopt’ and to see if he may have already followed through on that intent.

Of course, with the fine bunch of characters involved in this series, Leon is always able to sprinkle in unrelated plot-lines to keep things feeling true. In this novel, a secondary story involving Brunetti’s boss, Vice-Questore Patta, and their neighbor’s young son who has made several inappropriate comments and gestures to his wife. Patta enjoys using Brunetti as his go-to investigator even though he does not fully trust him. Meanwhile, Brunetti has a face-to-face meeting with Gonzalo that is one of the highlights of the novel and still does not completely answer all the questions Brunetti has.

Unfortunately, Gonzalo dies suddenly from a brain hemorrhage, leaving the case unfinished yet closed for the moment. Things do not stay quiet for long as a number of Gonzalo’s friends and relations travel to Venice for his memorial. A woman who considers herself Gonzalo’s closest friend, Berta Dodson, is the most intriguing figure to Brunetti as he had never heard of her before. Matters get even more complex when Signora Dodson is found strangled to death in the hotel she was staying at on the first night she was in Venice.

Unto Us a Son is Given is never predictable yet rings with truth and, in ideal Donna Leon fashion, does not tie up every loose end neatly by the novel’s end. As Brunetti continues his pursuit of Berta Dodson’s murderer, as well as the reason why her relationship with Gonzalo may have marked her for death, he is reminded of a statement his mother often used: ‘It would be nice if we could choose the people we love, but love chooses them.’ Reading Leon is always a nice break from the often predictable and over-the-top mystery-thrillers on the market. I hope readers enjoy spending time with Brunetti as much as I do and continue to seek out everything Leon has written within this series.