July 9, 2021
An epic quest of the hunter and the hunted, Boston Teran's Two Boys at Breakwater follows two youths in a New York born of Dante, who are manipulated as chess pieces in a tale layered with crime, violence, and corruption. 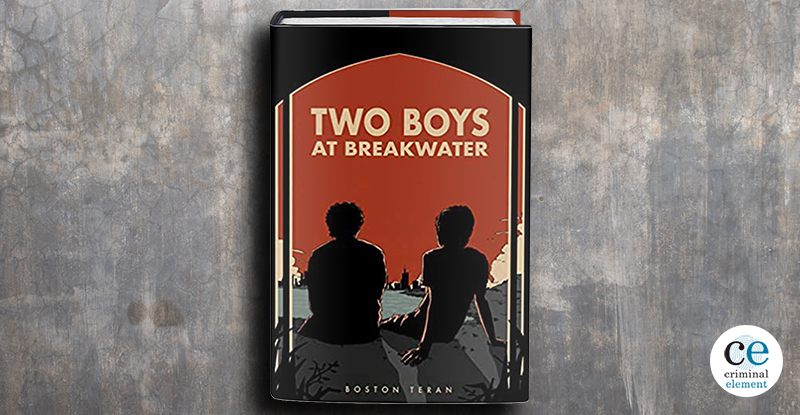 Ten-year-old Dean Teranova does not want to be in New York City in the summer of 1957. His father, a third-rate conman, has burned all their bridges in Florida though, so now their family is back in a city where juvenile delinquency is becoming more and more of a problem. Dean discovers this firsthand when he’s bullied by a small gang calling themselves the Pirates of Pelham Parkway. Fortunately, he finds a friend in Guy Prince, the young son of a racketeer recently gone missing. The two hatch a plan to get back at the Pirates, setting in motion a series of events that will see a Pirate named Gerundo dead and both Dean and Guy in prison.

Nine years later, Dean is a free man. He returns to the Bronx, despite what little he believes is left for him there, only to find that provisions have already been made for his life post-juvie. Now he has the financial stability and freedom to bend his brain and talents towards the topic that’s been preoccupying him since the start of his incarceration: what really happened to Guy’s dad all those years ago.

For Peter Prince’s disappearance was one of the biggest reasons Dean and Guy were punished so severely for their involvement in a fellow child’s death. The cops were convinced that Guy knew where his father had fled to in defiance of the crime family that Peter was most often associated with, and so they pushed hard for the kids to face the stiffest penalty possible in order to bargain information out of them. Trouble is, Guy sincerely had no idea where his father was. Dean, of course, knew even less.

Almost a decade later, Dean thinks he’s put together all the clues that will not only help his friend find his dad but also explain why Peter left in the first place. However, others are willing to go to extraordinary, violent measures to get that information out of Dean, even as unexpected allies circle round to try to protect two young men who they believe have already suffered enough.

If that was all this unflinching portrait of life and crime in mid-20th-century America was about, it would still be an above-average tale of mobsters and mayhem. But Boston Teran also examines the burgeoning LGBT rights movement, and the impact of the Mafia where their interests clashed and intersected with the movement’s. This passage regarding the atmosphere of the city during the funeral of a brutally slain leader of the LGBT community is just one example, written in gorgeous prose:

There was a burning electricity on these streets. It was a warm, clear, bright day, and in the sky the clouds looked like they had been simonized just for the service.

Those few blocks [of mourners and protesters] were giving off a lifeforce all their own. Some could call it politically magnificent and socially mind blowing. Others would say it was tawdry and degenerated. But it was alive and true to the times and the reality that came with it, a reality that was burning just below the surface of all existence.

This spotlight on a little known part of history, bringing the past to vivid life, only adds to the convincingly sweltering atmosphere of two summers of double- and triple-crosses. Even more than being a successful fusion of mob crime with sociopolitical issues not usually associated with the era or genre however, Two Boys At Breakwater is a moving, if unconventional love story. Guy has known that he’s gay for a very long time, and when he falls in love with Dean, he falls hard. Dean is less certain of his own romantic and sexual inclinations, but he is certain of his sense of friendship and loyalty:

[Guy] wanted to tell Dean that he loved him. He had loved him since he first secretly saw him at the edge of that pit, and then in front of the apartment building when he was being ragged on by those ratshits. And that everything [the homophobic cop] had said about him was true. He did not understand himself, yet he knew it to be true. But he was too afraid to say it, to admit it. Too afraid Dean would be lost to him. So what he said was, “I can tell them Gerundo jumped you, Dante. And all you did was fight back.”

They just sat there after that, waiting. Each had tried to save the other, and in doing so, insured their own undoing.

The tragedy of the lives of two young men used as pawns in a greater game around them, who fight back as best they can while struggling to stay true to their complicated relationship, is a powerful portrait of American life in the 1950s and 1960s. It was hard enough not being heterosexual back then, but the additional scrutiny of crime families and crooked cops could easily destroy the spirit of any kid bold enough to live their truth. That Dean and Guy survive a childhood of this in order to take the fight back to the people who’ve wronged them makes not only for a suspenseful, entertaining story, but also a poignant and life-affirming, if ultimately devastating, tale.