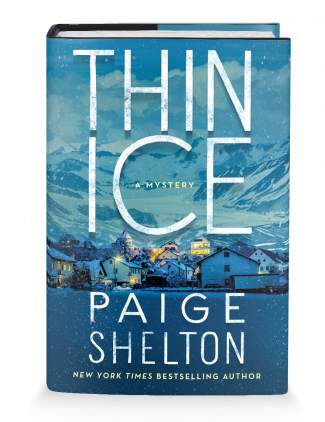 First in a new series by Paige Shelton, Thin Ice follows thriller author Beth Rivers as she tries to escape a fanatic’s obsession in the wide-open spaces of Alaska.

Paige Shelton is a prolific mystery writer with several popular series already under her belt: the Scottish Bookshop Mystery Series, the Country Cooking School Mystery Series, the Farmers Market Mystery Series, and the Dangerous Type Mystery Series. Thin Ice is the first in a new series. It’s also the first novel of Shelton’s that I’ve read and from the get-go I could tell I was in the hands of an experienced storyteller. She seamlessly works two plots around an independent and interesting protagonist, Beth Rivers.

This story entertained from its opening line — “The good thing about being suddenly overcome with fresh terror is that you forget everything else you were afraid of” — to its conclusion.

The novel starts with Beth arriving in Alaska in a two-seat prop plane. She’s running from the terror of having been kidnapped by a lunatic who claims she belongs to him. If you’re not into extreme violence or torture, don’t worry. There’s not detailed backstory about what happened to Beth. It’s also made clear that she wasn’t raped during her ordeal which can take some of the pressure off of wondering if there’ll be a gruesome scene somewhere later in the novel. Beth doesn’t remember much about what happened during her captivity, but as if often the case after trauma, details come to her as time passes and her memory is triggered by current happenings.

Beth is a best-selling thriller author who writes under the pen name Elizabeth Fairchild, so her true identity is fairly well-protected. The only thing slowing Beth down is that she’s also recovering from a head wound and subsequent brain surgery. Against the advice of everyone, she had checked out of the hospital back home because her fear and paranoia were driving her to get away. Her captor is still on the loose back in Missouri. Was he just a crazed fan? Is he somehow connected to her father who disappeared when she was a child?

While her dad is MIA, Beth’s chain-smoking mom, Mill, is present and a bit of a force to be reckoned with. Mill has been trying to track down her missing husband for years and is apparently not shy about dispensing advice or getting into people’s faces. While on a phone call with her Beth laments,

I also didn’t really want her to come see me. She’d be too big for this part of the world, too big even for Alaska. I loved her and would take care of her forever, but she and I didn’t need to spend a lot of time together in the same one hundred square miles.

The fresh scar on the side of Beth’s head from brain surgery makes it hard for her not to stand out as she begins to explore the community she’s chosen as her temporary home. Benedict is a fictional town of 500 souls located near the very real Glacier Bay National Park. Texans may claim everything is big in their state, but they’re puny compared to the size of everything in Alaska. As the local shop owner comments, Beth is like “a salmon out of water.” And she feels like one, too. A few of the hazards she negotiates include thunderous rains, mud, bears, and a Willie Nelson lookalike librarian who may or may not do secret government work. And then there’s the fact that Beth is boarding in Benedict House, a half-way house for female felons.

Shelton’s masterful use of dialog moves the story along in a seemingly effortless manner. It also enhances characterization and provides some local humor. Here’s a snippet of conversation between Beth and the librarian about WiFi:

Okay. That keeps the tourists on their toes.

After what Beth has been through, it’s not surprising that she’s paranoid and wondering if the guy who kidnapped her could have followed her to Alaska. No one knows where she’s gone and the people she encounters in Benedict don’t know who she really is. Except for one person, the local sheriff, who offers her the job of writing the local newspaper which has been on hiatus since the last editor died some years before.

Upon her arrival, Beth learns there’s been a murder/suicide in town. This shakes her, yet it also gives her something to focus on beyond her own predicament. Her grandfather was a lawman and she worked as his secretary for a while, so she knows a thing or two about police work. Her past, as well as her new role as newspaper reporter, gives her room to push her way into the investigation. Was it suicide? Most of the people who knew the deceased do not think she killed herself. She had plans for the future, including a knitting project for a baby.

The conclusion is surprising and satisfying. Thin Ice is a well-plotted story with a solid cast of characters. I look forward to the second book in this series. In the meantime, there is certainly a large backlist of Shelton’s mystery novels to explore.