February 4, 2022
Are you ready to play the game? Diana Urban's These Deadly Games follows Crystal Donavan, who, after receiving a mysterious video of her little sister gagged and bound, agrees to play a kidnapper's game... 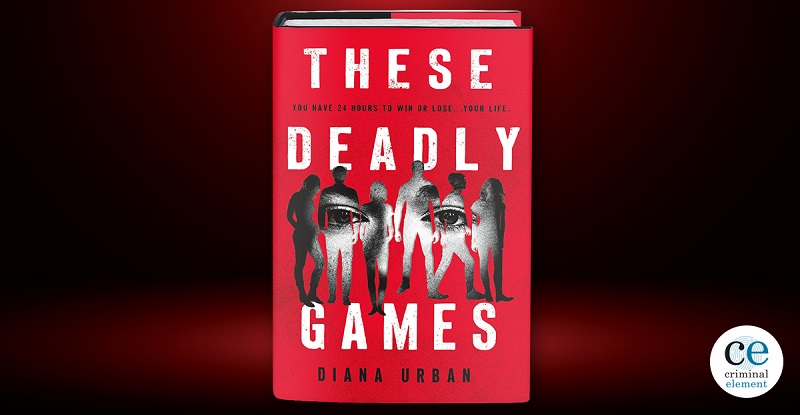 Crystal Donovan has already had to deal with a lot in her seventeen years, but right now her attention and efforts are laser-focused on the seemingly frivolous aim of making the team that will represent Vermont in the big MortalDusk video game competition. She and her five best friends are competing for the highest number of points that will allow all but one of them to continue to the state and then national championships. The grand prize is three million dollars and even split five ways, it’s a serious amount of money. Crystal desperately wants to win her share in order to help her mother afford the mortgage on the house they live in with her younger sister Caelyn.

Even though her mother is a surgical nurse at the local hospital, money has been tight ever since Crystal’s father left:

Lately, Mom struggled to squeeze much of anything between all the extra shifts she took to cover the bills. Still the late-night screaming matches she used to have with my drunk of a father were even more craptastic. I’d gotten good at distracting Caelyn from those. When they started a few years ago she’d slip into my room and crawl into my bed, and I’d helplessly clutch her skinny, trembling body close as we listened to them hollering. But then I started sticking huge headphones on her head and playing Mario Kart until it was over.

Video games were reliable like that. They can distract you from the pain. They can make the tears stop.

Games have always been Crystal’s way of coping with the worst of reality, so when weird messages on her phone challenge her to take part in strange real-life versions, she’s confident she’ll be able to outwit An0nym0us1, as the challenger calls themself, no matter what questionable pranks they want her to pull. She wouldn’t even take part if it weren’t for the videos An0nym0us1 shows her of Caelyn, tied up in a basement instead of on the weekend camping trip with her class where she’s supposed to be. An0nym0us1 promises to harm Caelyn further if Crystal doesn’t go along with the games, or if she tells anyone about them.

There’s nothing Crystal wouldn’t do to protect her sister. So what if the first game has her stealing test answers from a teacher at school? It’s a small price to pay to ensure her sister’s safety.

She starts to second-guess herself, however, when her theft lands her newest teammate, transfer student, and ace MortalDusk-player Dylan, in hot water. Could these games be someone’s attempt at sabotaging her team ahead of the tournament? While their relationships haven’t always been sunshine and roses, Crystal, Akira, Zoey, Matty, and Randall have been friends forever, and close ranks against all comers, including people who try to bully them online:

But then Zoey snarled at Lucia, “I have receipts. I screenshotted all of it, and I have proof the comments came from your IP. I’ll put it all online and make sure it ranks first on Google for your name. It won’t just be everyone at school who’ll see what you did. Colleges will see it. Future employers will see it. Everyone will know you’re a troll, and it’ll follow you around forever.” For a moment, Lucia’s wide, panicked eyes met mine, like maybe I’d step in, be a voice of reason–but her expression hardened as she likely remembered I’d started this. And as shocked as I was by Zoey’s rancor, I wouldn’t challenge her in front of Lucia. Protecting our friends mattered most.

As it quickly becomes clear that Crystal is being forced to choose between her sister and her friends, she has to race to figure out who would want to hurt and even kill the people in her life. Surely no one would go to all this effort just to play in a video game tournament? But six hundred thousand dollars is a lot of money to a desperate teenager, even to one without ugly secrets in their past and sins they’re still trying to come to terms with.

This was a fast-paced nail-biter of a young adult thriller that had me constantly second-guessing whodunnit, even as it made me feel a deep relief at not being a rash, excitable teenager any longer. I kept wanting Crystal to not fall for An0nym0us1’s threats and to just go to the police already. However, I could see why she felt she couldn’t trust anyone as Diana Urban skillfully sets up both Crystal’s psychological profile and the surveillance technology used to trap her in a claustrophobic web. I admit to especially enjoying the ending with its promise of righteous vengeance, so squarely was I in Crystal’s corner throughout. Despite her lapses in judgment, she learns and grows, as all the best book heroines do.