Book Review: The Woman in the Lake by Nicola Cornick 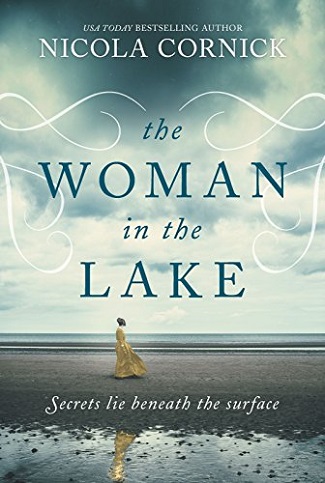 The Woman in the Lake

Part history, part mystery, Nicola Cornick’s The Woman in the Lake features a beautiful, golden gown with a deadly secret and a dark past—one that threatens to possess the troubled Fen and destroy her sanity.

Nicola Cornick is known for her fluid time-slip plots, which blur boundaries of time and space. The Woman in the Lake is fiction within a historically “accurate framework.” Says Cornick in her essay Historical Novels: Fact vs. Fiction, “It’s important to me that the setting is authentic—not just because I value historical truth, but also because it creates a vivid world through which my characters move.” There’s a twist to the chronology: “These dual timeline novels are not time-travel books, but rather stories whose perspective slips back and forth between time periods.”

Some objects carry a curse that transcends time, like the golden gown that Lord Gerard gives to his wife Lady Isabella Gerard in London, 1765. Later that year, a woman drowns in a lake in Swinton, a small town near Manchester.

Three months later, Lord Gerard stands at the shoreline of the lake, looking down at a woman wearing the golden gown. As the body slowly rolls over to reveal her face, it’s clear this was not his intended victim…

Fenella (Fen) Brightwell is a troubled, somewhat prickly young lady with a circle of fast-made friends: “It was either that or forever be the loner, the outsider, the one who came and went without leaving a trace.” Her home-life is unusual because she’s a carer for her alcoholic grandmother Sarah. She visits Lydiard Park near Swinton with her St. Hilda’s schoolmates but she wanders off from the group.

She could never forget the day she stole the gown. Twenty-three of them visited Lydiard Park that day.

Fen sees something that will change her life: “Over the high back of one chair, shimmering in the light with a soft, golden glow was the most beautiful dress Fen had ever seen.” There’s also a very odd man, dressed in old-fashioned clothes: “He looked bad-tempered and drunk. Fen was only thirteen, but she knew an alcoholic when she saw one.” Fen has a horrible compulsion: she’s an inveterate kleptomaniac. Just little things, “sweets from the post office, a pair of tights or some lipstick or face cream,” but she steps it up when she spots a shimmering golden gown.

The golden gown seemed to call to her. She felt the allure of it and was helpless to resist. The impulse was so strong and so sudden that she reached instinctively. She grabbed the gown and ran, fumbling to push it into her rucksack, her feet slipping and sliding on the wooden floor.

An irritated “woman with iron gray hair and an iron demeanor, a museum piece herself,” strides up to Fen and tells her irritably that everyone is looking for her. Even though Fen is desperate to get into the fresh air, she’s compelled to ask, “is there some sort of film being made in the drawing room?” but the woman snarls at her and walks away.

Flashback in time to a badly beaten wife, Lady Isabella Gerard. Her marriage is unhappy, her husband gave her the pox, he has a mistress, so why would he give her the delightful gift of a golden gown?

It was exceedingly pretty, with silver thread woven through the silk and a soft, shimmering appearance. I had seen it as a peace offering which had been foolish of me. It was not peace Eustace wanted, except perhaps from the torment of both hating and desiring me.

Eustace rapes his wife, ripping and tearing the gown, but during Georgian times, rape isn’t cause for the dissolution of a marriage. Constance, Isabella’s perceptive maid, is sure her mistress will give her the gown but somehow, Isabella can’t bear to part with it. The gown has a physical hold on her.

Present day. A grown-up Fen is back in Swinton. She left Sarah’s house when she was 16, exhausted from years of caring for an alcoholic. Fen is as odd a grown-up as she was a teenager. She’s a fantasist, a fabulist, someone who forces herself to be sociable lest she becomes agoraphobic. Life has not treated her well. Her ex-husband was mentally and physically abusive and she greatly fears that he will track her down. Like a wounded animal, she returns to Swinton, where she spent many years with her grandmother. Fen’s life takes an alarming turn when she receives a package from the estate of her recently deceased grandmother. The golden gown is inside—and her grandmother has added a cryptic message.

This is yours. Do with it what you think best but be aware of the danger.

What on earth had Sarah meant by that?

Fen knew all about danger. She had an intimate, atavistic relationship with it that raised the hairs on the back of her neck. The memory of terror stalked her.

Fen is so concerned by the message that she calls her sister Pepper, the executor of Sarah’s estate. Pepper says Sarah had the dress listed in her inventory.

“There’s a pencil scribble here, as well,” Pepper said. She spoke slowly. “It says, ‘Danger: Existing personality traits are accentuated.’ What do you think that means?”

Fen knows what it means and so did Lady Isabella. The golden gown exerts its malevolent energies on Fen’s life, sending her spiraling into despair and danger. After breaking herself of the habit years earlier, Fen starts compulsively stealing again. She is haunted, frightened, beset by fear, convinced that her ex-husband has found her. The friendship of her oldest friend, Jessie, and a new, sweet relationship with Hamish, Jessie’s older brother, are not enough to deflect the anxiety that envelops Fen. The golden gown exerts an ever-stronger control on Fen’s behavior and emotions. The supernatural thread of The Woman in the Lake weaves through time and space, making it impossible to predict the outcome of events in either century.  It’s quite unputdownable.

A Postscript: Perhaps the most famous cursed object in fiction is Gollum’s ring, from J.R.R. Tolkien’s saga The Lord of the Rings. The ultimate ring of power takes possession of the wearer and changes him (not for the better, much like Cornick’s golden gown).