July 22, 2022
In Allison Montclair's fourth Sparks & Bainbridge mystery, The Unkept Woman, Miss Iris Sparks has to deal with aspects of her past exploits during the recent war that have come back around to haunt her. Here's Janet Webb's review! 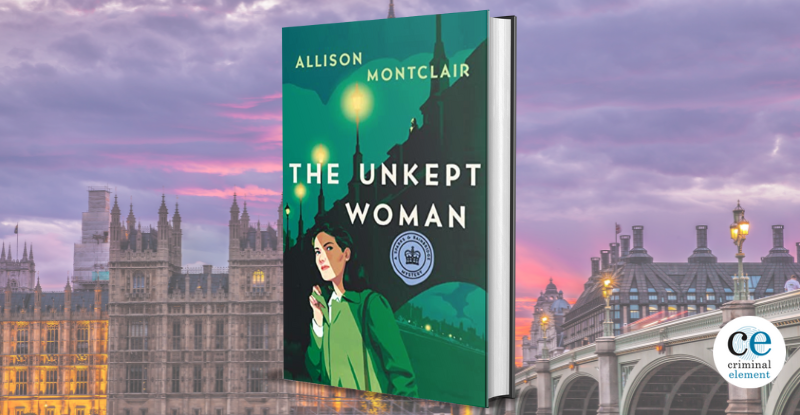 If you haven’t met the partners who comprise the Right Sort Marriage Bureau, you’re in for a treat. They were introduced in Allison Montclair’s The Right Sort of Man. The second book, A Royal Affair, is a particularly apt read during Queen Elizabeth II’s Platinum Jubilee year.

Miss Iris Sparks (Cambridge grad and serial fiancée) and Mrs. Gwendolyn Bainbridge (former debutante, widow, related to the Royals) opened The Right Sort Marriage Bureau, in 1946. They hit it off at the wedding of George and Emily Bascombe, where Gwen was the “match-maker,” for the seemingly mismatched couple and Iris, at the behest of the bride, quietly investigated the potential groom. Iris and Gwen were the fairy godmothers for the newlyweds…and what a felicitous encounter, as it resulted in their matchmaking business.

The two women have connections up the wazoo. Iris Sparks was an integral part of the war machine, although she refuses to discuss her service. Very hush hush. Gwen lost her much-loved husband to battle: her despair was so overwhelming that she was institutionalized for four months in a sanitorium. She and her six-year-old son Ronnie live with her titled in-laws, an unpleasant situation since Lord and Lady Bainbridge have custody of her son.

Nothing is easy for Iris Sparks and Gwendolyn Bainbridge. What they want—freedom from the control of her late husband’s family (Gwen) and an honorable, uncomplicated personal life (Iris)—proves difficult to achieve. Their wartime pasts envelope them in clinging tendrils. Do they want to cut through the vines and break free or are there aspects of the past that are worth preserving?

Iris’s rather lurid past intrudes. There was a time when the serial fiancée side of her life catapulted into the spook war-work she was doing under the radar. Her beau Mike dumped her and married on the rebound when he caught wind of Iris’s seemingly nefarious personal life. Iris has a key to the apartment she sort of shared with her married lover Andrew. A young woman surprises her there when she stops by and she and Andrew have words.

“What did this Jablonska woman want?”

“My, my, you do seem upset,” he said. “One might almost suppose you still had feelings for me.”

“I do have feelings for you, Andrew, and they are entirely negative. You came back from the war and we embarked on our torrid, tawdry, two-year affair. You’ve been going back and forth ever since VE day. And the entire time you were cheating on me.”

“No, the entire time I was cheating with you. Remember?”

“Then what was she?”

“Someone I knew in the war.”

“I was someone you knew in the war.”

The conversation devolves further but Andrew admits Iris “went through things” and he thanks her for her contribution to the war effort although he is adamant that his war, on European soil, far outweighed anything she experienced. The Jablonska woman is the tip of a very complicated iceberg, one that drags Iris back into spy craft.

Poor Gwen. It’s not easy to leave where she’s living. Ronnie’s grandparents love him and he is happy living there, cossetted and adored by the servants as well. Her father-in-law’s son from an extramarital relationship lives there too, and he and Ronnie are great friends. Against that backdrop, Gwen vows to legally fight to be the paramount decision-maker in little Ronnie’s life.  If she prevails and gets permission from the court to set up an independent household, what will be the cost? Will independence settle Gwen’s ghosts?

One’s past doesn’t like being put behind one, she thought. There are no dungeons strong enough or deep enough to lock it away and forget it forever. It will find a way to erupt back into the present, scorching everything in its path.

Buck up, old girl. You won’t be here for much longer if things go well.

The marriage bureau takes second place to the disruptions in their personal lives. They play some cards they won’t ever be able to play again. For example, Gwen reaches out to a secretive higher-up to spring Iris from prison. That avenue is closed to them after the request is fulfilled. Iris keeps encountering her former beau, now a detective sergeant and the one who got away. What Mike thinks he knows about Iris isn’t quite accurate. What about Gwen’s love life: Will she ever love again after the brutal loss of her husband to war?

Iris and Gwen both see the same therapist. Allison Montclair subtly reminds us that therapy is not a panacea; that answers and solutions must come from within. For the first time, there is a major conflict between Iris and Gwen: Iris needs Gwen’s help, Gwen can’t do anything untoward lest she jeopardize her ability to take on full custody of her son. Gwen is between a rock and a hard place.

Aristotle gave us the pithy phrase, “The whole is greater than the sum of its parts,” which is how I think of the two proprietors of The Right Sort Marriage Bureau. They are indisputably stronger together. I am not ready to say goodbye to Iris and Gwen and I hope I don’t have to wait long to find what happens next.