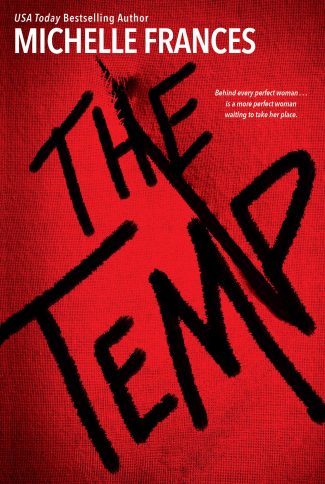 Trust and fear trade places The Temp by Michelle Frances, featuring a love triangle that defies readers’ expectations at every turn.

When I first read the back cover of The Temp, I was sure that I already knew how the story would go. The classic tale of a young secretary (or in this case a temporary scriptwriter) who seduces the boss and wreaks havoc on the work and home life of everyone involved. Oh, how I was wrong.

We meet the characters at the British Academy of Film and Television Arts Award show (BAFTA). Carrie and Adrian are attending the glamorous event, seated in the eighth row; he is nominated for Best Screenplay for his television show, Generation Rebel. Emma is watching the award show at home where she lives with her parents. While Adrian accepts his award, thanking his beautiful wife, Carrie, Emma is deflecting questions about her stalled career.

Emma is a young, aspiring writer. She is determined to prove her parents wrong and show them that her unpaid internships and short-term assignments were a necessary part of her plan. Although they do not yet know the worst of it—she was recently fired and has no leads. Emma dreams of one day winning her own BAFTA, but something—or perhaps someone—seems to be standing in her way.

“She was holding your BAFTA,” said Carrie. “When I walked in on her.”

Adrian chuckled, a self-congratulatory amusement that indicated he understood other people being fascinated by such trophies. “Was she?”

“Sometimes … I’m not too sure about her.”

This young writer will do anything to climb to the top. So what is Emma’s plan?

Carrie and Adrian appear to be the dream team. Adrian’s newest idea was just given the green light, and Carrie recently accepted a big position at a reputable production company with an exclusive deal to her husband’s next project. There is only one small problem: Carrie is 14-weeks pregnant. Adrian reacts as calmly as he can, but as a reader, you can immediately sense the tension. In his own words, parenthood is a “massive change of lifestyle,” and that seems to be the nicest thing he can say on the subject.

Carrie, however misguided, dreams that life with the new baby will bring their growing family together; he will write at home and share this magical time with her. Instead, Carrie quickly finds herself exhausted and alone. Desperate to keep her career and marriage intact, Carrie enrolls her newborn son in part-time daycare and returns to the office. The change does little to relieve her concerns though; her husband is increasingly distant, and her temporary replacement seems to be a smart, young version of herself. Carrie quickly feels her marriage changing and their priorities diverging. Adrian is spending more and more time at the beach house, and Emma always seems to be around.

In the end, the best part about these characters is that I found them to be nothing like they initially seemed. Even in the final third of the book, I continued to question my original assessments. Everyone had a secret, and I had to keep asking myself: Who am I rooting for now? It was clear that things were not going to end as I expected.

Nothing was what it seemed, and Carrie felt as if she was losing a grip on the very fabric of her life. Facts that she had taken for granted were crumbling without warning.

Closing the book, I once again found the blurb on the back cover. The end of it reads, “…until a letter left at her door changes everything.” Yes, the aforementioned letter is a key moment in the book, but overall, I have to disagree. From start to finish, I found the characters, relationships and my perceptions constantly changing.

Haven Bassett is an early education teacher and mystery fiction lover who lives in Tampa, FL, with her husband and their rambunctious chihuahua.