July 29, 2022
Allie Reynolds' The Swell is a psychological thriller that explores the dangerous ties between a group of elite surfers determined to find the perfect waves at any cost… even murder. Here's Doreen Sheridan's review! 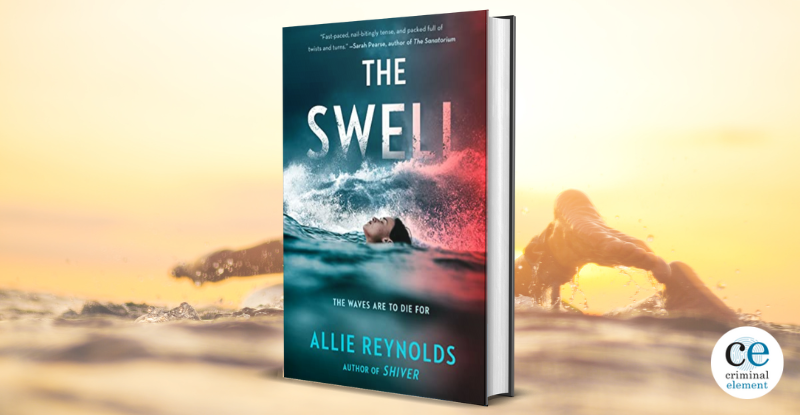 After her boyfriend died while surfing with her in Cornwall, Kenna Ward gave up her beloved pastime and moved to London, choosing to focus on her work as a massage therapist instead. In the three years since, her best friend Mikki has also left Cornwall behind, traveling around the world in search of the perfect wave that Kenna now spurns. Kenna and Mikki’s relationship has become naturally more distant as a result, until Mikki drops a bombshell during one of their infrequent video chats.

It isn’t just the fact that Mikki is planning on getting married to some guy Kenna’s never met, and has apparently not bothered telling her parents about either. Kenna can’t help getting a weird vibe whenever Mikki talks about her fiance Jack, as if Mikki is hiding something. Certain that her sweet, sensitive friend is in some sort of danger, Kenna drops everything, taking time off from work and flying to Australia despite Mikki telling her not to:

What is a friendship but a sum of the memories of the time you spent with someone? And the better the memories, the better the friendship. Memories of Mikki: me and her nude surfing one night when we were drunk; me push-starting her ancient Beetle down a narrow Cornish road above a cliff; a camping trip when she forgot to pack the tent so we chatted up the campers next-door and booted them out of one of their tents so we could borrow it.

All the hilarious things we got up to. And this will go down in our shared history as another of those things. The time I flew to Australia to pay her a surprise visit. At least that’s what I’m trying to tell myself.

Mikki’s shock at Kenna’s sudden appearance quickly morphs into enthusiasm at being able to show Kenna everything about her swell new life. This includes her hunky fiance, whom Kenna is surprised to find is genuinely solicitous of Mikki’s happiness. When the engaged couple invite Kenna to come with them to a secluded bay with amazing surfing, she agrees, even though she has little intention of ever getting on a board again.

At the remote Sorrow Bay, Kenna meets the rest of the Tribe, as they call themselves. Led by a charismatic trainer named Sky, the members of the Tribe spend their days surfing, climbing and otherwise challenging themselves to conquer their physical and mental limitations. The bay itself is wonderful, with huge waves that the Tribe share only with the local fauna, avoiding the overcrowding of the rest of the country’s, perhaps even the world’s, beaches.

Sky and the rest of the Tribe encourage Kenna to get back on a surfboard and to embrace all the things she’s cut herself off from as penance for her boyfriend’s death. But Kenna can’t shake the feeling that something is deeply wrong here, even as she’s formally asked to become a part of their circle:

Adrenalin spikes in my stomach at the prospects this would offer. Surfing; climbing. And danger: lots of it. I catch myself. Much as I’m flattered to be asked to join this toughened group, I’m only here until I can persuade Mikki to leave. She’s not safe with these guys. She’s too trusting. Too kind-hearted. And why is she marrying Jack when she doesn’t seem to want to?

The longer Kenna stays, the more she learns about what the Tribe is hiding. But how complicit is Mikki in their crimes? Will Kenna be able to save her friend, or will she find herself the next victim of Sorrow Bay?

The Swell has strong Point Break meets And Then There Were None vibes as people start to disappear and die in this surfer’s paradise. The delights and dangers both of surfing and climbing are described in realistic detail, as Kenna navigates the Tribe’s bizarre rituals and rigorous expectations. Our heroine doesn’t know whom to trust, leading to a string of odd choices in the second half of the book as she tries to break the Tribe’s bonds from the inside. Everyone has a secret, it seems, and while I thought Kenna’s reactions to these were far more reliant on her opinion of the perpetrator than on any actual morality, it was interesting to see how relationships can twist themselves out of all semblance of health and normalcy, and how everyone is capable of both great and terrible things.