Book Review: The Seven or Eight Deaths of Stella Fortuna by Juliet Grames 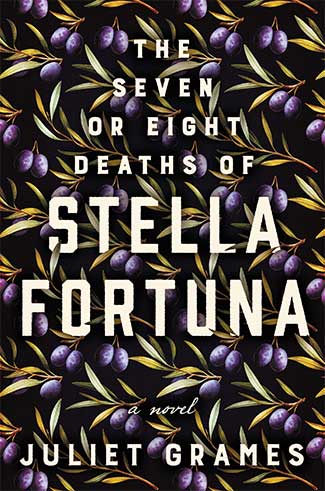 The Seven or Eight Deaths of Stella Fortuna

The Seven or Eight Deaths of Stella Fortuna by Juliet Grames is a debut novel about family transgressions as ancient and twisted as the olive branch that could heal them.

Juliet Grames’ debut novel is a masterwork that will rightfully draw comparisons with Isabel Allende’s The House Of The Spirits and Gabriel Garcia Marquez’s One Hundred Years Of Solitude. A generational saga following a Calabresi family from their roots in southern Italy to their eventual establishment in America, it’s both a ghost story featuring a seemingly deathless heroine as well as a heartrending account of the life of that same heroine growing up in a patriarchal society determined to bend her to its will.

The story is narrated by a young member of the extended Fortuna clan in the present day, mirroring the fact that Ms. Grames based this novel on the family legends of her own immigrant family. As an authorial trick, it’s executed both lightly and well, serving to pull together decades of history and anecdotes into a cohesive read. Whether wryly giving an often welcome modern-day perspective on a past event or gently exploring the metaphysical underpinnings of her tale, our unnamed narrator is a terrific guide to the Fortuna family and to the faith and culture that compels them:

I’m not asking you to believe in spirits or a soul that might be shut out of heaven by its own grief or envy; I wouldn’t ask you to believe anything I didn’t believe myself, and I don’t believe in anything. But what if we said that the power of human faith is in making things real even when they are not–that by giving imaginary entities our credence we allow them to assume power over us—to step into being? Because what is faith but a willingness to believe?

More importantly, our guide takes us through the life of the heroine of the piece, the titular Stella Fortuna. Born Mariastella to Antonio Fortuna, a beast of a man, and Assunta Mascaro, his sainted wife, Stella is the kind of girl who turns heads as much with her beauty as with her lack of interest in it. Proud, intelligent and charismatic, she is faithfully supported by her younger sister, Concettina, who is not as smart or as ruthless but who has been brought up to love her sister devotedly. The inhabitants of the tiny town of Ievolo where the Fortuna family lives believe strongly in the damage that can be done by the Evil Eye, so little Tina and Stella are raised as best friends in order to avoid any ill wishes that jealousy might bring down upon either sister’s (but really Stella’s) head.

Unfortunately, this does not stop Stella from nearly dying seven or eight times during her lifetime, often in quite grisly ways. Three of these incidents happen in Italy, but it is the last, an accident requiring radical brain surgery to save Stella’s life, that finally ruptures the life-long bond between the sisters.

Stella is a complex creation, a woman out of sync with her times. Her upbringing forced her to learn to be independent and to mistrust men, yet still insisted that she submit herself to marriage and motherhood, a path she finds physically abhorrent. It’s almost as painful to watch this spirited young beauty fight the expectations of a society she’s ill-equipped to defy as it is to read of her various near-death experiences:

Was she just going to let it happen? Let her whole life be the choices other people made for her? But she had never made a choice for herself–that had been her mistake. She’d never known what it was she wanted out of life, only what she didn’t want. People can’t understand negative convictions. A man who is willing to die for something is a hero, but a man who is passionately not willing to die for something is a coward. Maybe that was why no one had listened to her, thought she’d been doing anything but playing hard to get.

Stella’s plight is truly harrowing and made only more so by the knowledge that she’s merely one of the millions of women trampled by societies that deem them second-class citizens whose bodies and labor are worth far more than their thoughts and individuality. But it isn’t all tragedy and grief, as no life or family saga could ever truly be. Ms. Grames balances out the horrors of Stella’s path with the happiness and humor that can be found in any life, without ever making light of the hardships Stella has to endure. The Seven Or Eight Deaths Of Stella Fortuna is that special novel that presents a family saga both lovingly and within the context of its times while never excusing the terrible things its family members do. And it’s an unflinching portrayal of a truly remarkable woman and the life she builds for herself over the course of nearly a century, a century that still defines and informs much of American, and particularly Italian-American, life today.