September 8, 2021
Meg Tilly blends romance and suspense in The Runaway Heiress, a novel about one brave woman's dangerous path to escape her vindictive husband. 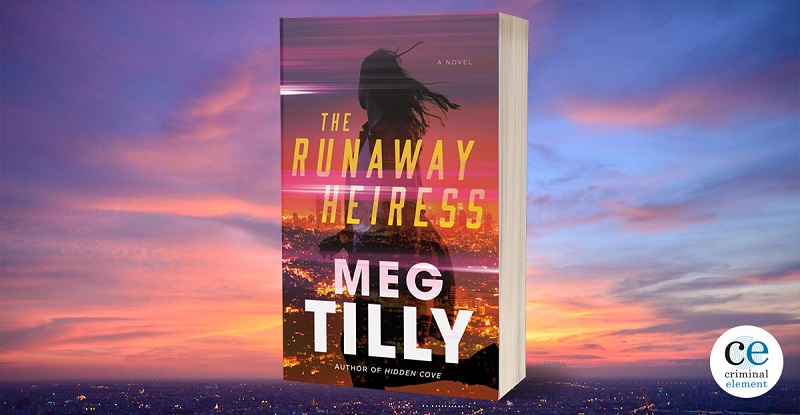 The title of Meg Tilly’s new thriller is evocative and intriguing—who is the heiress running from? Why is a wealthy woman on the lam? A vulnerable woman at the end of her rope is a trope that speaks to our deepest fears. We applaud a woman’s determination to leave a perilous situation while wishing no one endure such pain. Readers who enjoyed Kimberly Belle’s Dear Wife will appreciate The Runaway Heiress.

Meet Sarah Rainsford. Told in true Hollywood fashion, her story is larger than life. She’s been on the run for three years.

Hopefully, the promised separation agreement documents from her mom and dad’s old attorney, and family friend, Phillip Clarke, had arrived. Sarah would then take them to the public library, get them signed, notarized, and mailed back before the post office closed for the night. Once the separation agreement was signed and notarized, the clock would start ticking. And in a year from today she would be free. Free. Kevin would no longer have power over her. Legal or otherwise.

Kevin, her violent husband, is a New York City police lieutenant, with access to sophisticated search tools that have kept Sarah on the run for years.

Sarah has a soft heart, as seen when she picked up a young hitchhiker because she empathized with a girl’s plight.

Sarah should have kept walking, but instead, the girl ended up riding shotgun, filling the interior of Sarah’s car with the smell of unwashed body, malodourous BO, and Wrigley’s spearmint gum. And Sarah found herself headed to Santa Monica, California, because Jade had said her folks lived there.

Jade cleared out Sarah’s cache of cash, making it impossible for Sarah to find another town to disappear into. She’s stuck in LA with $136 to her name and half a tank of gas. Courtesy of a new name (Rachel Jones) and fake ID, Sarah lands a job as a personal assistant to Hollywood director Mick Talford.

During a raucous party, Mick opens his front door to a conservatively dressed “prim Mary Poppins creature.” Was she proselytizing door-to-door or had one of his friends sent him a stripper in disguise?

Not a stripper. The blush made that obvious. She must be there trying to convert him.  Belatedly, he realized he was sans apparel.

The employment agent hadn’t told Rachel the half of what working for Mick Talford was going to entail. Sarah is caught between a rock and a hard place but how could working for an “unshaven, stark naked, dripping wet,” Hollywood type be scarier than sleeping in her car? Even if Mick’s strung-out party posse left a trashed mansion in their wake.

After Mick sobers up, he realizes his house has never looked so good—there’s even a hint of lemon in the air. But why hasn’t Rachel filled up his fridge with groceries? Rachel tells him if he wants groceries, he’ll have to leave her cash. She’s hungry, intensely private, and broke. Mick takes care of problem number one with a delicious dinner at The Palm restaurant. Rachel says she’s not hungry but while they’re waiting a “waiter walked by with a basket of garlic cheese toast, momentarily capturing Rachel’s gaze like a catnip toy dangling on a string.” When they get home, Mick gives Rachel the leftovers from their extravagant dinner which she dines off for a week—before her first payday. Meg Tilly shows not tells Mick’s skill in seeing beyond the surface to come up with face-saving solutions.

When Mick’s longtime office assistant lands in the hospital, he’s forced to ask Rachel to take on a more visible role in his career. Specifically, he needs her to work with him at the studio. She agrees but she’s not comfortable with the request.

Who the hell is she and what is she hiding? Doesn’t have a bank account. Needs to be paid in cash. Something’s fishy about her car, and I’m pretty sure she’s lying about the contacts. The question is why? Is she in trouble? Does she need help? Help. He snorted. Right. Like you’re so good at that. He had to make a conscious effort to loosen his grip on the steering wheel. Her private life is none of your business. You’re getting obsessed, man. You’ve got to let it go. It wasn’t until he had taken the Pass Avenue exit and pulled up next to a cop car that he glanced over and noticed she had unbuckled and slid her body down so it wasn’t visible from the outside that the ping became loud alarm bells clanging in his head.

Mick wants answers but he also wants to help. Rachel tells him her story and divulges her real name: that simple, terrifying choice on her part engenders an inkling of hope. Readers’ hopes for a Cinderella story materialize when Mick realizes that his personal assistant is THAT Sarah Rainsford!

“Everyone presumed was dead? No body found.” Sarah shrugged and took another slurp of the milkshake. “Yeah. That’s me.” She said it as if she were talking about the color of her socks.

Mick shot to his feet, needing to move, jammed his hands in his pockets. “You’re that Rainsford? The missing Rainsford heiress?!”

“The one and only,” she replied, calmly dunking a French fry in the ketchup and stirring it so two-thirds of the fry was coated in the sauce before eating it.

“Holy crap.” He shook his head, trying to clear it. “I was obsessed with the case. Kept hoping she would be found, safe and sound.”

With a vengeful ex on her tail, Sarah is anything but safe and sound but who better to fight by her side than the supportive, somewhat obsessed man beside her? Mick and Sarah make a great team: The Runaway Heiress is a terrific romantic thriller that begs out for a screenplay.