Book Review: The Road to Grantchester by James Runcie 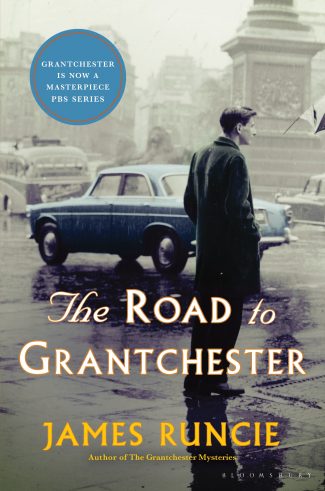 The Road to Grantchester

It is 1953, the coronation year of Queen Elizabeth II. Sidney Chambers, vicar of Grantchester and honorary canon of Ely Cathedral, is a thirty-two-year-old bachelor. Tall, with dark brown hair, eyes the color of hazelnuts, and a reassuringly gentle manner, Sidney is an unconventional clerical detective. He can go where the police cannot.

James Runcie has “become so familiar with the thoughts and dreams of Canon Sidney Chambers,” that he occasionally thinks he “could go on writing about him forever.” The Road to Grantchester is Chambers’ origin story; a prequel which reveals the answers to Runcie’s recent musings about how Sidney Chambers, cleric and crime-solver, came to be.

How did Sidney decide to become a priest? Why does he feel the need to involve himself in criminal investigation? And what fuels his desire to do good in the world?

These are a young man’s questions. Said Freud: “Love and work are the cornerstones of our humanness,” so it follows that happiness means an equal investment in love and work. What if your work is the outcome of your love of God? Also, is there an aspect of Chambers’ priestly vocation that lends itself to detection?

London—February, 1938. Sidney dances with his best friend’s sister, Amanda Kendall, in the halcyon days before the war. Before an assembly of the great and the good, Sir Cecil Kendall toasts his son at midnight in honor of Robert’s twenty-first birthday.

“Five years later, Sidney Chambers is on a transport ship with the 2nd Battalion, Scots Guards, preparing for landing south of Salerno.” Besides his friends Robert and Freddie, waiting to disembark, Sidney “thinks of Dante: the dead lining up for purgatory.” War is brutal and instantaneous.

Lawlor, a young ginger-haired boy from Falkirk who has lied about his age in order to join up, calls out: ‘So, this is sunny Italy?’ As soon as he gets to the shore he treads on a landmine and is killed. Half a mile from the beaches, the Germans send shells over that throw up geysers all around them.

In a quiet moment, Sidney reads Psalm 91 from the prayer book his mother gave him: A thousand shall fall at thy side, and ten thousand at thy right hand; but it shall not come nigh thee. Sidney is dubious: why would he be saved? It’s a crack in his armor, recalling the plea, “Lord, I believe, help thou my unbelief”—Matthew 9:24, King James Bible.

The “Rev Nev,” as he’s called, is a part of the 2nd Battalion. It’s not his first war, so his advice is both temporal and spiritual, like telling Kendall to dig his foxhole deeper. The Rev is peppered with questions—wartime is hell on earth: is he “offering a future state to keep us quiet about this one?” No. His rejoinder envisions the type of priesthood Sidney will aspire to, dispensing prayers and tots of something earthier.

‘I believe there is no higher calling than to be a priest in the service of God and God’s people; to offer some kind of stability in a bewildered world.’

‘But I can tell,’ the padre continues, ‘that I am depressing you all. Too many memories of school chapel, I can see. Would you like some whisky?’

Sidney is saved from drowning by Robert Kendall. Freddie and Robert tell him what happened, although Robert makes light of his gallantry, saying, “You would have done the same for me. And it saves me the bother of having to go and tell your mother you’d gone and bought it.” Soon afterward, Robert is killed. Sidney is devastated, telling Rev Nev that he can’t go on but Nev makes time to pray: “He gives Robert Kendall attention, respect, a gap in time.” Sidney learns a lesson that will make him a better priest and a better detective. He’s worried about telling the Kendalls about Robert’s death but Nev tells him, “In my experience, you do very little talking.” The bereaved and the lonely need a listener, someone completely attuned to their needs.

Read Angie Barry’s review of Sidney Chambers and the Persistence of Love, the sixth book in the Grantchester Mysteries.

Sidney is wounded and is sent to convalesce in a monastery. An Irish nurse, Catherine, senses that Sidney is struggling like Doubting Thomas: how does he know God exists? Catherine dreamily recounts the story of the Supper at Emmaus, when Christ appears at a supper table with a married couple. She tells Sidney recognizing that God walks beside us requires only that “we wait, we pray, we listen.”

At last, the war ends. Sidney is seconded as an “aide-de-camp to the Head of British delegation, Humphrey Waldock,” tasked with carving out new borders through the Italo-Yugoslav Boundary Commission. Waldock wants to help Sidney with his future endeavors but he has no patience for “shilly-shallying” and uncertainty.

‘You can’t have survived the war for nothing. Don’t waste the reward of peace.’

‘Except it doesn’t feel like peace, does it, sir? I can’t quite trust it.’

‘Well, it’s all we’ve got, Captain Chambers, so we have to make the most of it.’

An exhortation of sorts. When Sidney finally comes home, he borrows George Herbert’s words to explain himself to Amanda Kendall: “soldiers in peace are like chimneys in summer.” She takes him to the National Gallery where she focuses on domestic scenes, telling Sidney “people will always need to eat, drink, wash and play music.”

They find themselves in front of Caravaggio’s Supper at Emmaus, Christ with outstretched arms in blessing, the two strangers suddenly realising who is with them, light in the darkness, the simplicity of bread and gesture; its distilled meaning.

Sidney recalls his conversation with Catherine about Emmaus and wonders if it were God or Amanda who planned for him to see Caravaggio’s painting, marveling “how faith can arrive like the dawn.” Sidney surrenders, consults with Rev Nev, and, braving brushback from his oldest friends and family, decides to become a priest.

Not only a priest but unbeknownst to Sidney, an investigator as well. Here’s how it starts. Henry, Freddie’s ex-lover, accuses Freddie of killing Frank, Henry’s special new friend. Sidney uncovers the truth with almost preternatural ease because of his powers of observation and his deep knowledge of his friends. Sidney picks up the gun at the crime scene and sniffs it. There are no traces of gunpowder, ergo, his friend is innocent, and Frank’s death is by his own hand.

Sidney insists on honesty, for himself, and his flock, leading by example with gentle persistence. His first assignment in the modern suburbs of Coventry is rather grim, according to Freddie, ever the bon vivant. Sidney is “a long way from Cambridge feasts and philosophical speculation, the glamour of London theatre and the front line of war.” It would be foolish, however, to think that Sidney is not destined for greater things. Thanks to the good offices of Humphrey Waldock, and an Archdeacon who “is one of Rev Nev’s old muckers,” he is asked to apply for the job of vicar in Grantchester, “one of the most coveted in the Diocese of Ely.” And so it begins. What a pleasure it will be for a new reader of “The Grantchester Mysteries” to start off with The Road to Grantchester.