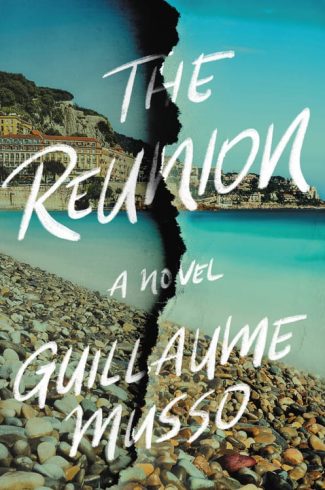 In The Reunion by Guillaume Musso, a glamorous prep school girl goes missing after a love affair with a teacher in this irresistible thriller from one of France’s bestselling novelists…

Guillaume Musso, one of the top three bestselling authors in France for years, is finally getting translated into English with The Reunion. It is his fifteenth thriller in French and was recently made into a TV miniseries.

Thomas, now a writer living in Manhattan, goes back to Antibes on the French Riviera where he grew up, on the occasion of his fiftieth prep school reunion in 2017. What could be a fun event is actually dreadful for Thomas and his friends Maxime and Fanny: indeed, this anniversary will launch a major renovation project, during which a body will be found—the outcome of something very bad they did 25 years ago.

The revenge notes the two boys receive do not bode well.

In 1992, Thomas’s girlfriend, Vinca, disappeared at night during a snowstorm. Actually, the French title La jeune fille et la Nuit literally means The Maiden and the Night. The rumors are that Vinca eloped with her philosophy teacher. But no one ever saw them after that day.

The chapters alternate between these two years, with narratives in first- and third-person. As the friends wait with fear for the upcoming days that may lead them to prison, they try to reminisce and figure out what really happened to Vinca, a girl they realize was very mysterious.

I was a firm believer in the García Márquez maxim: “Everyone has three lives: a public life, a private life, and a secret life.”

Incidentally, this quote is present in at least another book by Guillaume Musso, La Fille de Brooklyn.

Little by little, the flashbacks help the reader discover the truth. Obviously, the end is not what you would expect from the start. Layers keep multiplying, as well as red hearings and the list of other potential suspects, and the narration accelerates with suspenseful scenes. The final straw is a very clever twist.

Ultimately, this crime novel is a reflection on life:

It is futile to deny the complexity of human emotions. Our lives are sometimes inscrutable, often disrupted by conflicting desires. Our lives are fragile, at once precious and insignificant, sometimes bathed in icy waters of loneliness, sometimes in the warm stream of a fountain of youth. Our lives, for the most part, are beyond our control. The slightest thing can turn them upside down. A whispered word, the twinkling of an eye, or a lingering smile can raise us up or cast us into oblivion. And yet, in spite of this uncertainty, we have no choice but to pretend we can control the chaos in the hope that the inclinations of our hearts will find a place in the secret plans of Providence.

Musso writes an amazing portrait of his characters, with many details that make them quite unique, true to life, and so endearing that you as a reader want to spend more time with them.

I also enjoyed his great, detailed, and atmospheric descriptions of the area, a region the author personally knows very well. Actually, Musso’s novels are often informed by places he is very familiar with, whether it be the South of France, Paris, or New York.

The translation by Frank Wynne had a great flow to it. It is so well done you could think it was originally written in English. The only mistake I identified was about the famous Lagarde & Michard series, twice (in chapter 11 and in the Epilogue) identified as grammar books. Many generations of French students are familiar with these, actually literature textbooks.

Let’s hope anglophone readers will fall under Musso’s charm, and more of his fifteen or so novels will soon be available in English, as they are already in forty-two other languages.