January 6, 2023
In a successful mix of high-octane suspense and psychological depth, authors Peter Mohlin and Peter Nyström deliver a thrilling sequel in the John Adderley series: The Other Sister. Read on for Doreen Sheridan's review! 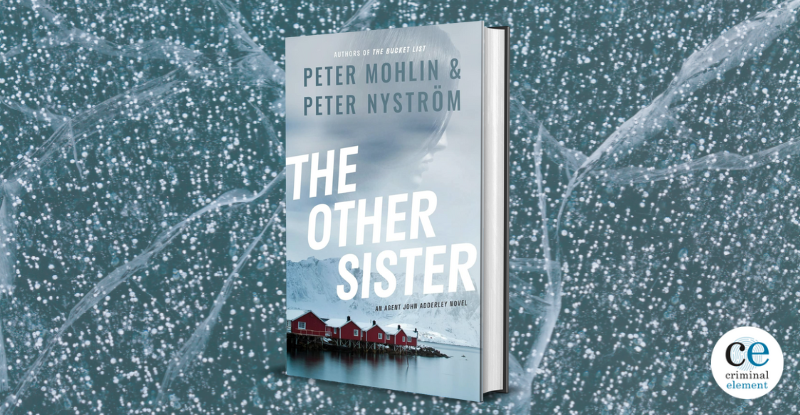 Former FBI agent John Adderley has been living as a small-town Swedish police detective ever since going into the witness protection program. In his previous life, he’d infiltrated and turned evidence against the criminal organization run by the grudge-holding Ganiru, an international drug kingpin whom he helped nab in Baltimore.

Sweden seems like a good hideout for him, as his estranged mother is Swedish. More importantly, so is his young niece Nicole, who lives near where he’s been settled. While John is in no position to take an active role in Nicole’s life – for all she knows, he’s only a caring policeman – he does take an interest in what happens to her, even as he lives constantly prepared to flee should Ganiru ever find him again.

He’s actually on high alert as the book opens, after getting an e-mail from Trevor, a former undercover colleague. He knows he shouldn’t have broken protocol to stay in touch with the agent who helped save his life, but when Trevor asks to meet after a cancer diagnosis, John doesn’t know how to say no. The reunion is bittersweet, as the two men affirm that Ganiru is still very much out to get them. This time however they have a plan that might free them both from his clutches for good.

Trouble is, John’s work keeps getting in the way. A woman is murdered and the new chief assigns him to the case:

John had been reluctant when Ruben asked him to lead the investigation, but he realized that he had no reasonable arguments for refusing. He could hardly divulge to his boss the real reason why a murder didn’t fit into his life right now.

That was what he and Trevor had agreed to do. Pretend that nothing had happened, which included doing his job. John assumed the hunters were watching him. He had seen two men on the other side of the quay on the short stroll from the apartment[.] It was impossible to tell whether they were working for Ganiru.

So John focuses instead on the case before him, biding his time before putting his escape plan into motion. The murder victim Stella Bjelke was beautiful, rich, and successful. As the CEO and public face of Raw, an online matchmaking company that eschews information directly provided by subscribers in favor of algorithms that aggregate their online behavior in order to match them with suitable companions, she attracted both adoration and antipathy due to the seemingly impersonal nature of her company’s work. She was adamant on its effectiveness, however, claiming a higher success rate than other similar services. She even used the app herself.

That, alas, is what seemingly got her killed. Her body is found early one morning on a construction site, dressed up for a glamorous date. Her throat has been slashed and her face disfigured. Luckily for the police, the only person who followed her onto the deserted site was caught on camera. It seems like an open and shut case but the Swedish police aren’t as easily satisfied as their American counterparts might be, much to John’s chagrin.

Stella’s younger sister Alicia doesn’t believe John’s theories either. As the constantly put upon Chief Technology Officer of Raw, she has long had an up close and personal view of who Stella really was and what she really went through. One of Stella’s more tiresome traits was the way she courted controversy. Alicia is only too happy to enlighten her frenemy Linda of this while they’re watching a still living Stella be interviewed on television about the hate she’s received, after Linda comments:

“God, that’s awful for her–having to put up with that.”

“Stella loves it,” said Alicia. “The more attention she gets, the more users we get. I’d be willing to bet she has her own troll factory in Russia pumping this shit out.”

“Forget it. You don’t need to worry about my sister, that’s all I’m trying to say.”

“The haters can hate if they want to,” Stella told the host. “I don’t care. We’re in the business of love and I’m not going to let narrow-minded people stop me from spreading it.”

As John’s cat-and-mouse game with Ganiru intensifies, he realizes that the murder of Stella Bjelke might provide excellent cover for getting out of his increasingly dire circumstances. Unluckily for him, he has to contend with an Alicia who has her own secrets and messed up motivations for obscuring what happened to her sister. Will the two be able to come to an understanding, or will the truth damn them each to their worst possible fate?

This was a unique twist on the usual Nordic police procedural, as Agent John Adderley imports a host of American problems to his sleepy Swedish town. For him, corruption is the norm, as he seeks above all to preserve his own life and liberty. Alicia provides an interesting counterpoint as a damaged woman trying to make sense of life without her emotional mainstay. Together, they make for an unusual deviation in this genre, that’s well worth checking out for readers looking for something different and darker even than the standard Scandinoir.