Book Review: The Lost by Jeffrey B. Burton

July 21, 2022
In Jeffrey B. Burton's The Lost, a home invasion turned kidnapping at the mansion of a billionaire financier brings Mason “Mace” Reid and his cadaver dog in to solve the case. But nothing is as it appears, and the red herrings could be lethal. Don't miss Doreen Sheridan's review! 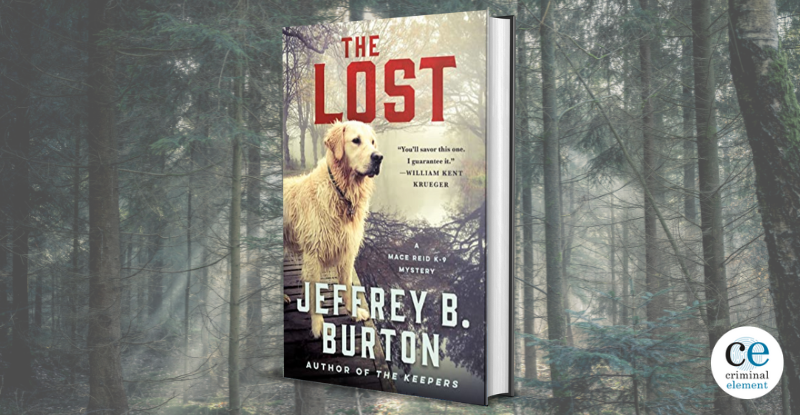 Mason “Mace” Reid is a dog obedience trainer specializing in human remains detection (HRD). His stable of dogs is as well-trained as it is loved, and is constantly on-call to assist Chicago law enforcement in seeking out the dead or otherwise lost. Though Mace is proud of all the dogs in his pack, the star of his enterprise is undoubtedly Vira, a golden retriever who does more than just sniff out corpses:

Vira, and perhaps all HRD dogs, receive this tidal wave of stimulus, this tsunami of scent data, and my golden retriever then takes the art of human remains detection to the next level…to the Albert Einstein or Thomas Edison or Marie Curie level. When Vira discovers a body, or visits a crime scene, she attempts to process this data, to perform some kind of forensic analysis on the various smells and odors–the scent DNA–in order to decipher the meaning. [S]he attempts to interpret these odors.

As such, Vira is surprisingly good not only at recovering those gone missing, but also at ferreting out clues and tracking killers from the scent trails left on their victims. When the wife and daughter of Illinois financier Kenneth Druckman disappear, and a corpse is found soon after, Mace and his dogs are called in to assist. Vira quickly makes it clear to Mace that Kenneth is not the innocent victim he’s pretending to be. But what could possibly motivate the wealthy businessman to fake the kidnappings of his own family?

Mace and Vira soon find themselves caught in a tangled web of crime involving a mysterious Belgian tycoon and Russian gangsters. Our intrepid heroes must race against time to rescue the innocent victims, and occasionally foil the perpetrators, of criminal schemes gone unexpectedly and horribly awry. One such scheme involves a fence who has fallen out of the game, only to be tempted back in when Druckman comes calling with what seems like an easy score:

Besides–what could possibly go wrong? He’d moved some similar objects of interest for his New York associates over his years in Chicago–fewer and fewer as the days peeled past–after he’d ascertained there’d be little or no risk, of course.

Humor leavens the action of this darkly twisty tale, in a manner reminiscent of one of my favorite dog-loving and dog-featuring authors, David Rosenfelt. Mace has the same self-deprecating cognizance of his own limitations as the protagonists of Mr Rosenfelt’s books do, though his official capacity as the trainer of working dogs makes for a distinctly different perspective on the sub-genre. His relationship with Chicago Police Detective Kippy Gimm is also a highlight, as they team up both personally and professionally to bring wrongdoers to justice. Though, as readers will discover in these pages, Mace’s definition of justice isn’t necessarily as black and white as that of the sworn officers of the law with whom he works.

The Lost is an entertaining dog-centric mystery packed with plenty of surprises for both thriller and procedural fans. While this is the third installment of the series, it’s an easy jumping on point for new readers, who will find much to appreciate in the empathy of its protagonist and in the endearing nature of his companions—canine or otherwise—as they fight crime and offer rescue to those in need of it.