Book Review: The Last Woman in the Forest by Diane Les Becquets 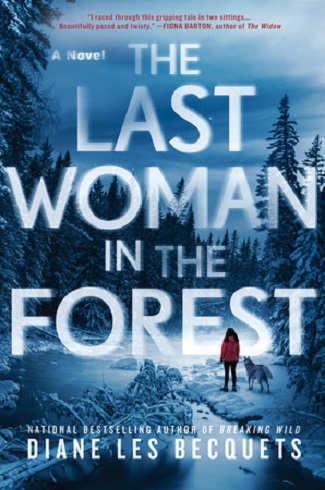 The Last Woman in the Forest

The Last Woman in the Forest by Diane Les Becquets is thriller about a woman whose greatest threat could be the man she loves.

Disclaimer: this review was written by a dog lover.

This mystery got off to a bit of a slow start for me. It seemed a bit choppy, but once the plot was set up, the action took off and I didn’t want to put the book down.

Marian Whelan Engström is an outdoorsy woman who wants nothing more than to work with dogs and enjoy the beauty of the great outdoors. She’s found work with a team of wildlife professionals who train and work with rescue dogs that scent out the scat of animal populations they’re collecting data on. They work in remote areas under extreme conditions to collect information that’ll help assess the environmental impact of business projects or the health of a wildlife population. They collect data on all shapes and sizes of critters, from grizzly bears on down to salamanders. Assignments take researchers all over the world, so relationships can be tough. That doesn’t stop Marian from falling for Tate, a veteran dog handler and one of the team’s project managers. After Tate’s death, Marian starts to wonder about things that Tate had told her, things that are contradicted by new information or that simply don’t add up.

Enter Nick Shepard, a retired profiler who is originally from Detroit and now lives in Idaho with his wife of 47 years. He spends his time studying the poetry of Eliot, Cummings, and Stevens. But his twilight years aren’t all golden. He’s battling cancer and haunted by the 300 murder victims he’s investigated over the course of his career. Nick still responds to serious inquiries from people looking into open cases. When Marian reaches out to Nick with questions about the Stillwater murders he’d worked on, murders that have continued to trouble him, he’s all in and agrees to do a psychological autopsy on Tate for her.

The storyline goes back and forth between Marian and Nick, with a whole bunch of hiking and dog action in between. It’s set mainly in the Northern Rocky Mountains with some action in Washington and Idaho. If people weren’t being murdered, reading this book would feel almost like a mini-vacation.

Les Becquets tackles a complicated plot, one that seems fresh and new to me. Her writing shines when she’s describing the landscape and how the teams work with dogs to collect data. There’s plenty of gear and gadgets, but it’s not all fun and games. Dogs can get injured in fur traps or by other wildlife.

The tension mounts as Marian uncovers more information about the man she loved as well as on other team members. As she races to find answers, Nick feels the pressure to help Marian while also racing against the cancerous tumors causing havoc in his brain. His tumors are in the left hemisphere of his brain and intuition occurs in the right hemisphere. Already a believer in intuition, Nick wonders if the trouble in his left hemisphere is causing other sections and functions of his brain to become more active.

Some might think of the intuition as something magical. Nick understood otherwise. It all came down to subtle and brief signals in the brain. Einstein called the intuitive mind a sacred gift and ‘the rational mind a faithful servant. We have created a society that honors the servant and has forgotten the gift.’

For readers who usually shy away from novels with serial killers, the psychological intensity and gruesome nature of that sub-genre are tempered by the focus on the great outdoors, the work with dogs, and the fact that Marian and her female colleagues are strong, realistic characters. Don’t get me wrong, there are some graphic scenes, but nothing gratuitous. The focus of this story is Marian and her struggle to find the truth.

In addition to the plot feeling new and fresh, so is the relationship between Marian, a twenty-something woman, and Nick, a man probably in his seventies and an expert in his field. There is no saccharine sweet father-daughter trope or wise old guy guiding the naive young woman vibe. Nick is a professional offering his expertise. Marian is a person with a burning desire to follow an uncomfortable line of questioning. And while women aren’t the only victims in this story, as a shocking statistic makes clear, “Ninety-five percent of stranger-to-stranger homicides were committed by men against women.” Instead of women beating themselves up for being victims or men telling women they need live small lives to stay safe, Nick has this to say to Marian:

We can be quite effective at punishing ourselves for our perceived sins when what we really need to do is get in touch with our own anger. Your personal world is stacked against you. Your gender becomes a target you wear on your back. Are you at fault for any of this? Of course not. Maybe it’s past time to be totally pissed off.

This suspenseful thriller pulls in aspects of amateur investigation, profiler work, working dogs in action, and plenty of outdoor adventure. The twists and turns and red herrings kept me reading late into the night.