March 6, 2021
The Invisible Woman is a gripping historical novel based on the remarkable true story of World War II spy Virginia Hall who defied all odds to help liberate a nation. 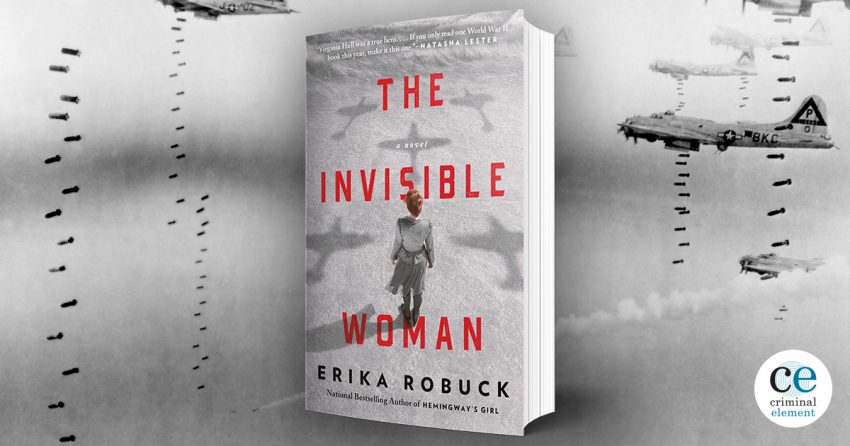 Do you remember learning about super-spy Virginia Hall in social studies or history class back in the day? No? Well, neither did I. This is not a bad thing because that indicates that she did her job well. As an American fighting with the resistance forces during WWII, Virginia did indeed remain invisible. The spy that the Nazis labeled ‘The Limping Woman’ also went by the tags Artemis, Diane, and la Madone. She also accomplished everything she did while wearing a prosthetic leg.

If that intro whets your appetite in much the same way as it did for me then I guarantee you are going to be extremely taken with this terrific historical fiction piece set during WWII from author Erika Robuck. Robuck has gone out of her way during her literary career to focus on unheralded women and I believe that the subject of Virginia Hall may be the best heroine she has featured to date.

We are first introduced to Virginia in the summer of 1926 when she was a free-wheeling young American playing around with her best friend in Paris, a Parisian local. It is hard to believe that less than twenty years later Virginia will have matured to the point where she is one of the most respected spies working for the Resistance against the Nazis. The action promptly jumps to the Brittany Coast of France in March of 1944 where Virginia is now known by her enemies as ‘the limping lady’ since she now wears a prosthetic leg due to an accident where she blew off most of her foot and lower leg.

Virginia’s main target is the Nazi officer Anton Haas, informer and henchman of Gestapo head Klaus Barbie, the Butcher of Lyon. Even though the work she does for the Resistance will save thousands of lives, her vendetta against Haas is purely personal and she will not see this war end without her taking revenge against him. Her handler is a British officer named Vera who never gets too close to Virginia while simultaneously keeping her on a short leash and moving her strategically to where she needs to be.

Wherever Virginia goes she handles the airdrops that bring supplies, food, and weapons to the area. However, there is no greater evidence of the work she does than when she spearheads a movement in which thousands of young Jewish children are funneled through France in order to save them from the Nazi death camps.

The characters are all real in this story and the tension that Robuck creates is vivid throughout the novel even though the outcome of the war is already known. The Invisible Woman is a highly satisfying read and one of the best World War II novels I have read in quite a while. The intensity is unrelenting, and the crimes committed by the Nazis are on full display here. It is nice to see Virginia find love and get her chance at revenge during these extremely stressful times. We may not have learned about Virginia Hall’s role as a heroine in history class, but this novel ensures her efforts will remain invisible no longer.