February 17, 2021
Set in Sweden in the midst of World War II, The Historians by Cecilia Ekbäk is a riveting tale of murder and conspiracy. 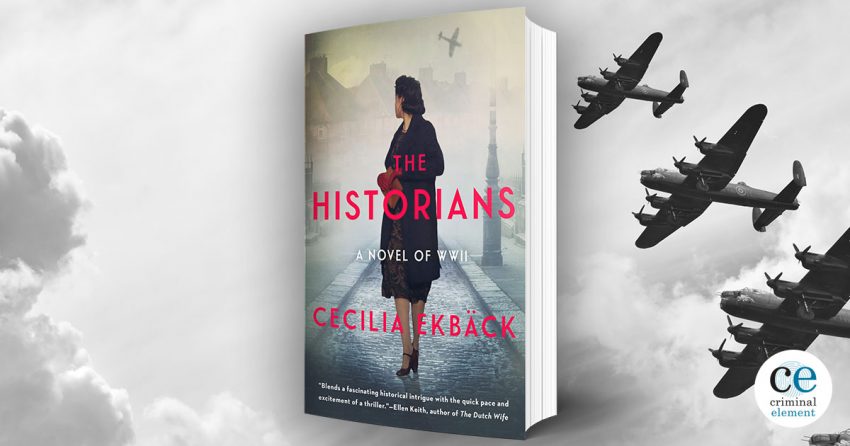 Cecilia Ekbäck was born in Sweden and now lives with her family in Canmore, Alberta, Canada—but it is evident from her novel The Historians that her heart is still firmly in Sweden. Specifically, she has chosen one of the most stressful times in the history of the world—the midst of World War II—to create a novel that tries to define Sweden’s true identity at a time when the typically neutral nation tried to stay out of world affairs and skirmishes like that one.

There are two protagonists in this novel, each of whom are coming from different parts of the Swedish government but are destined to come together to solve a mystery that will rock the nation to its core—the likes of which Sweden probably has not seen in modern literature since the works of the late Stieg Larsson. The first is young Laura Dahlgren, not far removed from her days as a history student in Uppsala. Now, she is working on a team that is attempting to negotiate iron access with Germany. Her life will be completely upheaved by the unexpected murder of her best friend from College, Britta, and she will not let anything stand in the way of her getting answers about this.

Our other hero is Jens Regnell, the personal secretary to the minister of foreign affairs in Stockholm. He is waiting for a report on racial profiling in Scandinavia that was put together by none other than the recently deceased Britta. For reasons unknown to Jens, this report never finds its way to his desk. Britta had tried reaching out to Laura just prior to her murder and now Laura will never forgive herself for missing out on the potentially important message or warning that could have allowed her to intervene and save her friend’s life.

There are literally dozens of characters coming in and out of the action within The Historians and I was extremely thankful that Cecilia Ekbäck provided an alphabetical list of characters at the front of the novel which I continued to flip to throughout the story. At the heart of the story is the racial profiling by Adolf Hitler against the Jewish people. There were thousands of Jews in the Scandinavian countries and the atrocities about the millions of Jews who had suddenly disappeared after going to the rumored concentration camps is something that sickened most members of the Swedish government. The fact that Britta’s report might have done more than just speculate about this makes it that much more necessary that Laura and Jens, who eventually join forces based on a common goal, locate it and see that the results are published and acted on.

The problem, of course, is that any conspiracy is going to involve those who sympathize with Hitler and his Nazi ideals. Will a sharp history student and an honest government official be enough to not only solve Britta’s murder but also reveal the report she was silenced over? Cecilia Ekbäck believes in them and I am sure readers will as well. The Historians is historical fiction done right as it places readers in the middle of a point in history and yet is able to introduce something brand new set against that historical backdrop.