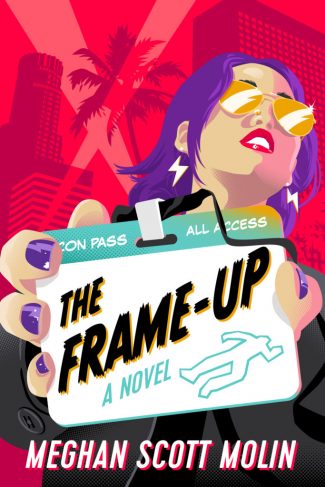 As a lifelong comic book and pop culture fan, I was so excited to get my hands on a copy of Meghan Scott Molin’s The Frame-Up. Her heroine, MG Martin, is living the dream as a Los Angeles-based comic book writer who also designs and sews costumes for her drag queen best friend, Lawrence. MG lives platonically with her professional gamer roommate Ryan but, alas, that’s about it for her social life. While she spends her time immersed in geek culture, prior relationships have burned her on most actual face to face interactions.

So she doesn’t expect a snarky comment made while in line for coffee to lead to a very handsome narcotics detective thinking she might have inside information on a case he’s investigating. MG was looking over Detective Matteo Kildaire’s shoulder at a crime scene photograph on his iPad, and notes aloud that it looks awfully reminiscent of a classic panel from one of her all-time favorite comic books, The Hooded Falcon. Being a good cop who pursues all credible leads, Matteo pumps her for information, eventually saying:

These criminals are bad guys. I know you understand that concept. I don’t want some overweight guy in spandex with a hero complex to get killed because he thinks it’d be fun to play superhero. Right now the drug rings are just pointing fingers at each other. And it could be that’s it and that I’m chasing phantoms. But. If this is a real person trying to live out some superhero fantasy connected to this comic, I’m not sure how long that will hold if this masked avenger continues his antics. I’m trying to take the shortcut if this is a real person trying to tell us something using this comic.

When his investigations lead to him posing as her boyfriend in order to better scope out her workplace and colleagues, who may somehow be involved, sarcastic, tough MG finds herself developing feelings for the “Muggle,” as she calls him. As she and Matteo dig into the history of one of her favorite comics, they uncover a decades-old real-life conspiracy that could put the lives of everyone MG cares about in danger, even as she’s risking her heart on a man she might have to betray.

I was quite impressed by the layered mystery Ms. Molin constructed for this novel, replete with red herrings and some seriously awesome geek-centric set pieces that made my fangirl heart squee. It was a terrific, wholly believable tale of comic book escapades in the real world, delightfully spiced with pop culture references (even if I find it very hard to believe that Matteo is that clueless about subjects like Harry Potter and Twilight, given their high level of media saturation.) I also super loved how Ms. Molin approached the drag queen scenes. In her acknowledgments, she thanks her sensitivity readers for their work, and their contributions absolutely shine through in her depictions.

I also thought it was very bold how Ms. Molin chose to center a heroine who has clearly been damaged by the contempt of her “normal” parents and the misogyny of large swathes of her peers, to the extent that she internalizes a lot of what hurts her and turns it on others, such as the new vice president of marketing at her workplace, who happens to be a woman. Lelani Kapuani wants to help champion MG’s pet project, Hero Girls, despite the antipathy of their boss, Edward Casey Jr:

“Mr. Casey isn’t the most fond of it, but I’d like to become an advocate. We girls need to stick together, right?”

I study her face. She looks sincere. She sounds sincere too, but I can’t shake the feeling that Lelani’s Cheshire smile doesn’t reach her eyes. That she’s calculating. Maybe she’s sizing me up as much as I am her. Touché. “Right.”

The elevator seems to be taking forever to descend five stories. I don’t know that it’s ever felt this long. It’s on par with how I feel reading a Sentry issue.

Lelani breaks the silence first. “You’re a good writer, MG. The best on your team.”

I’m surprised at the straightforward compliment. Two points for no womanly, manipulative mind games. “Thanks.”

Given how she grows as a person through the course of this novel, I’m hopeful that MG will also be able to set aside her own misogyny and gatekeeping as she continues to track down the comic book vigilante who set off the events of The Frame-Up (and I will happily discuss my theories as to who the Golden Arrow is, if anyone wants to discuss it in the comments.) It’s a promising start to a series that does one of the best jobs in the market today of integrating superheroics with real life without relying on magic or science fiction, while also being a well-written mystery novel.