Book Review: The End of October by Lawrence Wright 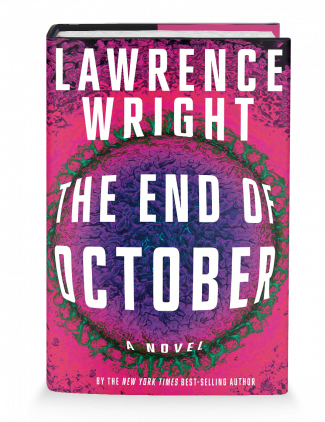 The End of October

In this riveting medical thriller from Lawrence Wright, an unlikely hero races to find the origins and cure of a mysterious new killer virus as it brings the world to its knees.

The End of October, about a pandemic virus that sickens millions and crushes the global economy, hits close to home in the current crisis. There have been many novels about global pandemics, but few were released while the world was sheltering from a real pandemic, and few writers capture the drama as well as Lawrence Wright.

Wright is best known for his non-fiction, including the Pulitzer Prize-winning The Looming Tower: Al-Quaeda and the Road to 9/11. While it’s a work of fiction, The End of October feels ripped from the pages of today’s news…only worse. The fictional virus Kongoli, named for the Indonesian refugee camp it first appears in, kills 70% of patients, both young and old. It is easily transmitted through the air and on surfaces. Making matters worse, it spreads from birds to people, meaning migratory birds are distributing the deadly virus throughout the world.

Wright follows Dr. Henry Parsons, an expert in infectious diseases at the Center for Disease Control (CDC) in Atlanta, as he traces the origins of Kongoli and searches for a cure. Not long after visiting the refugee camp in Indonesia and finding the entire medical team dead, he realizes this is serious. One of the infected men heads on the Hajj pilgrimage to Mecca. Wright describes the Hajj in gripping detail, with millions of people packed in tight quarters. So much for social distancing.

With the pilgrims striving to return home and birds carrying Kongoli across the seas, the spread of the virus is inevitable. Wright captures the moment when an astute government official recognizes the coming disaster and is promptly ignored.

“We’re talking about a shutdown of the entire transportation system,” Commerce said accusingly.

“Exactly,” the tone-deaf Bartlett said, as if Commerce were proposing a wonderful idea. “As much as possible, we need to urge people to shelter in place. It would be best to announce it this morning so that preparations can be made—the National Guard called up, police reinforced, borders closed, sports and entertainment facilities shuttered, nonemergency cases discharged from hospitals, schools closed, public meetings postponed, and the government shut down. In addition, any travelers need to get home at once, before the pandemic takes root in America”

The deputies simply stared at her.

One can only wonder what advice was ignored in government meeting rooms around the world early this year. Just about everything that’s happened in the real world takes place in Wright’s story, but ten times worse.

Public officials should take note: After it appears the curve has flatted and restrictions are lifted, the Kongoli has a second wave.

The End of October shows the painful transition from normalcy to living through a pandemic where society breaks down. Henry’s wife Jill and his children remain in Atlanta, separated from him, as the food supply is nearly exhausted and people they know die. Henry desperately wants to see them, but he’s stuck in Saudi Arabia because of travel restrictions. Wright uses flashbacks to show how close the family was in better times and to make the reader yearn for their safe reunion.

Meanwhile, tensions over who’s to blame for the pandemic boil over into war in the Middle East, and cyberattacks between the United States and Russia. Instead of working together, the nations are tearing each other apart — another warning for our times.

There are no happy endings in global pandemic novels. There will be death. Lovable characters will perish, although Wright spares the reader from witnessing the most painful moments. The question is, will the story end with the destruction of civilization or a beacon of hope?

Reading about a deadly pandemic is almost as harrowing as living through one. It’s a sobering reminder about who the real heroes are. They’re the people of medicine and science that the world turns to when the tiny devils come for us all.