July 27, 2022
In The Drowning Sea, Sarah Stewart Taylor returns to the world of Maggie D’arcy with another mystery so vivid readers will smell the salt in the air and hear the wind on the cliffs. Read on for Janet Webb's review! 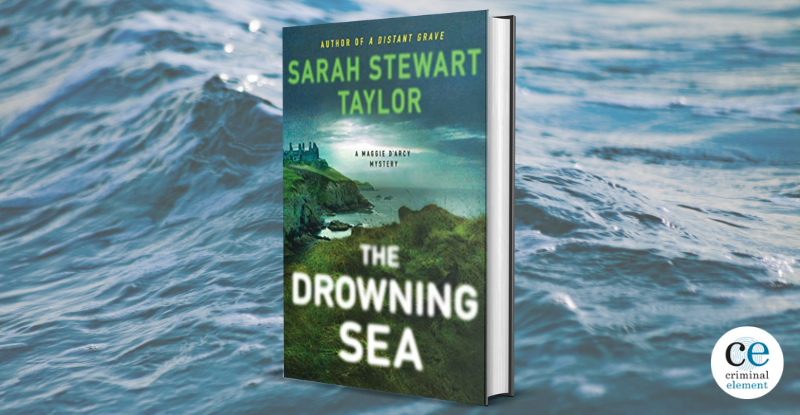 Maggie D’arcy is an unforgettable character. In The Drowning Sea she throws caution to the wind and moves to Ireland for the summer. Her life-changing decision is made easier by the difficult circumstances that led to her losing her job as a homicide detective on Long Island, a story told in A Distant Grave. Her boyfriend Conor Kearney, an historian, has rented a house in the Ross Head area of West Cork, a gorgeous holiday location on the westernmost part of Ireland. Conor is taking the summer to write a book on Irish political history of the 1950s, ‘60s, and ‘70s. There’s room in the rustic vacation cottage for Maggie’s daughter Lilly, his son Adrien, and the Kearney corgi, Mr. Bean. The vacation is a test-run for the couple. Conor wants Maggie to move to Ireland permanently with her daughter and make a new life with him in Dublin, but teenagers can be tricky at the best of times and Maggie hasn’t yet shared her long-term wishes with Lilly. The jury’s out on what will happen at summer’s end.

Professionally, Maggie has been integral to solving two crimes in Ireland and she’s made some friends in the Garda. Although her American citizenship won’t prevent her from working as an Irish cop, she’ll have to go to the Garda Training College for a year, no matter her experience. The training college is in Templemore, more than an hour and a half from Dublin. Conor isn’t thrilled that as soon as they form a new unit, Maggie will be off at college. It’s a relief for Maggie to have the time to explore all the ramifications of her possible decision. But once a cop, always a cop, and mysteries abound in Ross Head, starting with the discovery of a dead body underneath the nearby cliffs.

Months earlier, Polish construction laborer Lukas Adamik disappeared, but folks chalked it up to homesickness, certain he’d returned home. Maggie checks in with her Garda friends—Dublin detectives Roly Byrne and Katya “Griz” Grzeskiewicz—and they tell her it’s a suspected suicide. But an autopsy reveals that Lukas was murdered. Soon afterward, Griz arrives in West Cork, fleshing out local detective sergeant Ann Tobin’s resources. Of course there’s another detective in the area—Maggie D’arcy. Ann’s not sure how she feels about that.

Ann hopes that having a cop in the mix on Ross Head won’t complicate things. Probably not. Maggie D’arcy seemed a bit too curious, natural, of course, for a detective, but not inclined to jump in where she’s not wanted. Ann will have to keep an eye on that, though.

Decades earlier there was another mysterious death at Rosscliffe House, an Anglo Irish manor house. It was built in the 1780s, but in recent times it has fallen on hard times. Rosscliffe House was once home to a famous Irish painter who died under mysterious circumstances, Felix Crawford. A local lad who’s now a successful developer is trying to create a luxury hotel/upscale housing community but not all the locals are in favor, which creates tension in the village. The gap between the rich and poor townspeople causes a struggle between gentrification versus respect for the old ways.

Maggie’s landlady, artist Lissa Crawford, is a child of the big house. She asks Maggie to help unravel the mystery of her childhood memories. Lissa has seen bloody images her whole life and wants to know if anything in her past would explain such disturbing images. She begs Maggie to investigate.

The walls were crowded with her paintings, abstract compositions with bright splashes of color that reminded me of Rorschach inkblots. In their simple frames, they climbed the white walls like glorious stains, spilled wine or paint or candle wax on a tablecloth.

If the summer isn’t complicated enough, Maggie’s seventeen-year-old daughter Lilly falls in love with Alex, a charismatic young Polish immigrant and gifted musician. Alex was friends with Lukas Adamik, and Maggie is worried Alex might have some criminal involvement. Conor’s life is turbulent as well: His ex-wife is contemplating a move to Paris to be with her new boyfriend. What will that mean to their joint custody of their son, and might Bláithín’s move force an early sale of their marital home?

Maggie knows how to listen, infer, and interrogate, and it’s killing her to be on the outside looking in—she’s constantly ruminating about what the guard (the colloquial description of the police) are doing. The Drowning Sea is a multi-faceted story: Maggie’s life is impacted on a personal and professional level. She discovers the power of history to impact the present. Unsurprisingly, no one can keep Maggie from ferreting out the secrets of Ross Head. It’s an atmospheric and surprising story, another winner in the Maggie D’arcy mystery series.