February 11, 2020
In Scott Carson's The Chill, a supernatural force born in the small Catskills village of Galesburg threatens the entire city of New York. 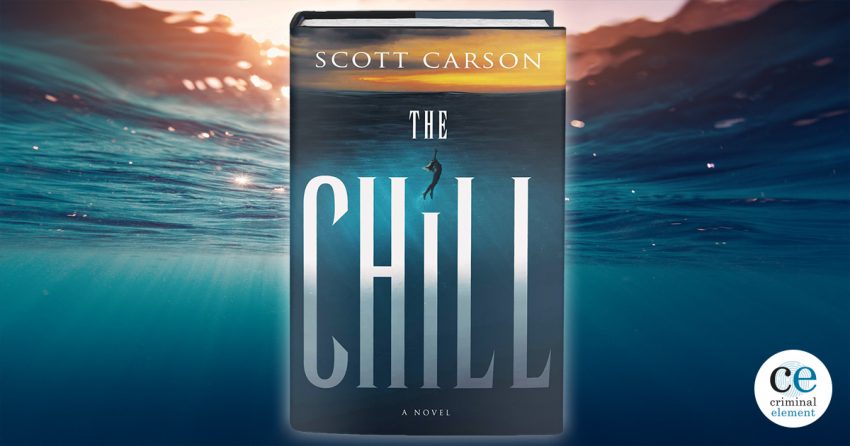 Over a hundred years ago, the Catskills village of Galesburg was destroyed in the name of progress. Flooded, so the Chilewaukee Reservoir could be built, in order to funnel water downstate to quench the thirst of New York City.

But the people of Galesburg didn’t go without a fight. Some didn’t go at all…

They had been there since before America’s founding, and they stamped their land with a dark promise. A promise that has demanded regular sacrifice from those faithful few who remember it, a promise that may soon be fulfilled as the Chill fills with the steady rain.

DEP Officer Gillian Mathers remembers. Her family is inextricably bound to Galesburg. Her grandmother taught her its history, had her memorize the names, and made her understand what she would someday have to do.

The rain fell and the night came on, but still she paced the rocks alongside the Dead Waters, the eerily calm basin below the frothing tailwaters, the deep basin where old foundations still stood. There would be scorch marks on the drowned stones, she knew. She’d never seen them, but she knew they were there.

She knew all there was to know about Galesburg, New York, the forgotten village, the sunken town.

Foolish old stories. Terrible stories, told to a child. An isolated child whose mother had died when the child was only three, leaving her alone with a grandmother who told terrible stories, who asked for horrible promises.

She paced the wet rocks, peering into the dark water as if she might spot the corpse Aaron had described. Down along a stone foundation, he’d said. The flooded-out remains of an old house, or maybe a store, one of the buildings of…

The name sent a shiver through Gillian that had nothing to do with the cold rain. She stopped walking, put her hands to her temples, and squeezed her eyes shut.

As the water levels continue to rise at the dam, others are drawn to the Chill: socially awkward inspector Mick Fleming and by-the-book Sheriff Steve Ellsworth, whose grandfathers also played integral roles in Galesburg’s story.

The sheriff’s son, Aaron: a young man frustrated by failure and in a self-destructive spiral, stumbles into the growing strangeness at a crucial moment. Gillian’s father Deshawn, a sandhog from New York, has started to have his own impossible experiences miles away under the city.

The man who’d called his name was sitting astride a massive timber beam that held back the threatening press of loose dirt. He was at least fifteen feet in the air, way up above Deshawn’s head, and water dripped from his old leather boots and plinked off the timbers below. He was dressed in worn dungarees. A crushed-down, filthy felt hat rested on his head. He was young, no more than twenty-five, maybe not even twenty yet. Nearly a boy. Serious eyes, though, and they were locked on Deshawn’s.

“You gotta listen,” the kid said. “We keep tellin’ you things, and you gotta start listening to them.”

Deshawn was about to respond when he remembered that all the walls here were concrete, that no wooden timbers had ever been hauled down into or up out of this stretch of Water Tunnel Number 3. Then he hit the switch on his SureFire flashlight and sent two hundred lumens in the strange kid’s eyes.

The kid was gone. The light bounced harshly off the bare concrete walls, not a wooden timber in sight.

Each will have a crucial part to play in the coming drama, some for good and others for ill, and by the end the question isn’t who will die to satisfy Galesburg’s hunger for revenge — but how many.

With The Chill, Scott Carson — the pseudonym for an already bestselling author — has delivered a ghost story that literally drips with clammy atmosphere. There’s plenty to unnerve us, from ghostly apparitions to fanatical small town zealots. As Gillian herself puts it, “The Chill is where old mythologies met modern engineering.”

Building from a bedrock of historical fact, Carson asks what if? What if a manmade creation intended to harness the power of nature channeled something distinctly supernatural? What if the people warning a surveyor to build elsewhere, that this place isn’t good, were telling the truth?

And what if those insular backwoods crazies weren’t completely crazy after all?

“I think it was like Waco or Jonestown,” she said. “Grievances collided with faith that collided with insanity, and whatever was legitimate about the grievances or redemptive about the faith got swallowed up by the insanity. That’s the way I think it happened, at least. I can only guess, obviously.”

“All of that was to stop the lake from coming?” he said. “To keep their land?”

He said that as if the notion was insane. Dying over land? Killing over land? She felt like snapping at him, asking if he understood the first fucking thing about the history of this country — or any country, for that matter. Die for land, kill for land. Rinse and repeat. Grow an empire, destroy another. Everyone was righteous in their cause at the moment; it was not until you looked back with the sophisticated eye of a supposedly more civilized time that you found the old beliefs and the old actions to be absurd, barbaric. Those savages would scalp people, burn them at the stake! historians would say in shock, even while their own nations fired cruise missiles, carpet-bombed villages with napalm, and raced one another for development of nuclear and biological weapons. Some of the same people who were appalled by a scalping were proud of the invention of VX nerve gas.

The Chill is thoroughly riveting; a page-turner that hooks you with its vivid setting and deeply unsettling oddities. With a small but well-developed cast of characters, the plot is focused and speeds along at a steady clip as Carson layers in the paranormal flourishes between the necessary scientific and historical details.

There are just enough surprises and beats of action; this is definitely a story that’s more about the journey than the ultimate destination.

And amidst the creepiness, Carson gives us plenty of heavy themes to ponder over: how much weight we give familial bonds and obligations, the true meaning of sacrifice, the needs of many versus the few, the clash between progress and tradition, the importance of remembering the past to avoid future tragedy, and the dangers of hubris.

If The Shining is your favorite Stephen King chiller — if you wish Lovecraft had applied his eldritch sensibilities to a ghost story — if you’re hungry for something with a New England Gothic vibe that bridges the historical and the modern — and if you love well-made disaster movies, The Chill deserves a place on your bookcase.