July 29, 2022
Set in the rugged remote landscape of north Cornwall, Eve Chase's The Birdcage is an emotional mystery about three unusual sisters forced to confront the past. Read on for Doreen Sheridan's review! 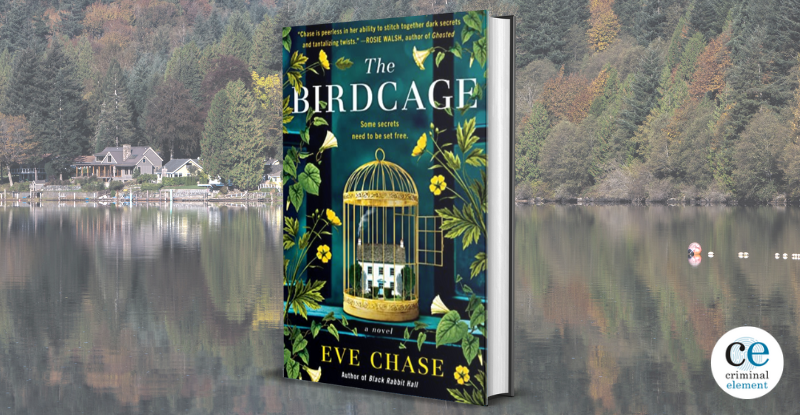 Lauren Molloy is not looking forward to returning to the Cornwall estate where she was last together with her half-sisters and their father—her Finch family as her late mother used to call them—twenty years earlier. Staying at Rock Point had been the highlight of her young life, the only place she and her older sisters got to spend time being doted on by their father and grandparents for an entire glorious month before being whisked back to their everyday lives with their mothers. That all ended the summer Lauren was thirteen, when the total eclipse of the sun in 1999 heralded a disaster that her mind still can’t fully process.

Even back then, even before the eclipse, a strange energy had seemed to sizzle through all of the inhabitants of Rock Point:

“Don’t overthink it. It’s just the discombobulating eclipse energy, Lauren.” Grandpa walked to the window, his hands clasped behind his back. He folded back a shutter fully, revealing the sea and sky ablaze, as if from a distant fire. “Can’t you feel it? It’s in the air. Disturbance,” he added with relish. “Almost three minutes it’ll last,” he continued, absorbed by the view. “The temperature will drop and, if we’re lucky, we’ll see the moon’s shadow racing towards us from the west, nine hundred meters a second. Like an explosion in reverse.” He turned to me with intense lit-up eyes, looking just like Dad when a painting was going well. “Umbral velocity, Lauren. I’ve waited for this my entire life, you’ve no idea.”

Dad is Charlie Finch, a renowned artist who somehow managed to father three little girls with three different women in indecently quick succession. Though the mothers’ disdain for one another hasn’t stopped the girls from getting close, their attitudes still influence how the sisters view each other. It doesn’t help that Dixie, Lauren’s mom, refused to let Charlie introduce Lauren to her older sisters till she was nine, after Flora and Kat had already firmly bonded. But over the next few summers, the three girls would build their own tumultuous ties, till the day of the eclipse changed everything.

Twenty years on, Flora and Kat are equal parts eager and reluctant to rekindle their sisterly closeness. Flora, once an unapologetically devastating creature of both beauty and intellect, has settled into an uneasy domesticity with a man who doesn’t read and a four year-old who demands all her attention. The still prickly Kat has sacrificed any semblance of a personal life in favor of babying tech start-ups into existence. Both of them are apprehensive about returning to a place where they once did terrible things. Worse, they feel beholden to continue protecting their emotionally fragile younger sister from what exactly happened that last eclipse-haunted summer.

But there’s someone else in Cornwall who isn’t happy the sisters are back, someone whose memory is crystal clear and who’s been waiting a long time to confront them over what they’ve done. As a series of creepy incidents escalates, the three women and their father will have to finally face the truth of what happened two decades ago, and how they were each culpable in the tragedy that ensued.

It feels strange to describe a thriller about reconciling past sins as being heartwarming, but The Birdcage somehow manages to be suspenseful while at the same time remaining sensitive toward and generous to its troubled, flawed characters. Here’s Flora reflecting on the summer of 1999, and how it changed the trajectory of her once seemingly limitless life:

Despite her determination not to think about that summer, it must have simmered somewhere inside, she realizes now. Reducing, intensifying, like a salty sauce forgotten on a stove. Changing her consistency in unforeseen ways.

But if there was a precise instant that she’d turned into the sort of woman who’d marry a man like Scott, she’d been oblivious. All Flora knows is that <i>before</i> she’d been fearless, desperate to explore the world.

The psychology and family dynamics are spot on, with Eve Chase sidestepping obvious cliches in the design of her engrossing tale. In only the biggest example, Charlie could easily have been a Lear-type figure, but it’s clear he genuinely loves his kids and is quite a good dad despite his inability to stay faithful to their mothers. The twists and turns were above average, and the ending deeply satisfying. This is one of those thrillers that doesn’t rely on depravity to propel the plot, but turns its canny eye on how our all-too-human weaknesses can set off terrible consequences, and how love and compassion can heal and help us all become better people.