Book Review: Takes One to Know One by Susan Isaacs 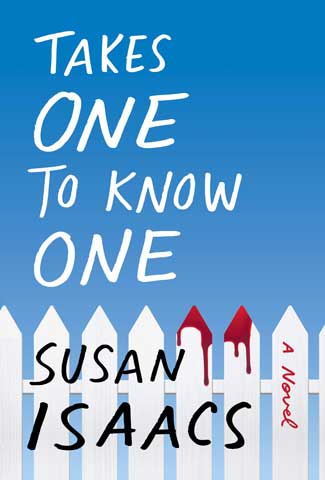 Takes One to Know One

Takes One to Know One by Susan Isaacs is a bitingly wry and ominously thrilling novel about a former FBI anti-terrorism agent turned Long Island housewife whose curiosity leads her to investigate a boring coworker that ends up opening a case far more dangerous than she could have imagined.

Thirty-eight-year-old Corie Geller has it all: married to a rich, handsome widower and the adoptive mother to his 14-year-old daughter, Corie spends her Long Island days as a professional reader of Arabic-language fiction, recommending the ones with potential saleability in an English-speaking market to the literary agencies she freelances for. All her life, she’d looked forward to marrying the man of her dreams and raising a family, so she should be satisfied with her life of ease. At least, that’s what she keeps telling herself.

The problem is Corie used to be an FBI agent specializing in anti-terrorism operations and interviews. She still does contract work for the agency, and it’s not that she misses her old life, exactly. It’s just that there’s a weird emptiness in her new life that she doesn’t know how to deal with. Her husband, Josh, is open to having a baby, but Corie finds herself oddly reluctant. None of her skill at determining human motives—even her own—can help her figure out why.

So when she starts to notice the odd behavior of one of the guys in her lunch group for freelance entrepreneurs, she isn’t sure whether there’s something actually off or if she’s just subconsciously looking for excitement. Pete Delaney always shows up early and always sits in the same place where he can keep an eye on his Jeep, but none of that is enough to ring the alarm bells of any law enforcement type. What really gets to Corie is this:

Truly, the only intriguing aspect of Pete—a guy so careful, so predictable—was that he was so nothing. Everyone else in the group, me included, openly carried around sacks of our qualities—humor, brains, empathy, pettiness—all those normal human attributes. Big, small, even micro sacks, depending on the individual. But Pete seemed either to have zero baggage or to have put his personality in storage. His friendly neighbor shtick felt like an add-on, as if he recognized that he, too, needed some gear to tote around.

As other small things about him force their way to her notice, Corie decides to treat him like a case, fully expecting nothing to come of it. But as she looks into his life, she begins to discover not only the truth about Pete but a lot more about herself, her marriage, and her relationship with her parents.

Her dad, Dan Schottland, is a retired NYPD detective who fell into a depressive funk after his partner of 16 years died in the 9/11 tragedies. He spends most of his time now on a recliner, eating junk food and watching cop shows, to Corie’s concern. The investigation, however, gets him off the couch and back into detective mode, a relief for them both.

Being with my dad was a plus for me. I could collaborate, at least a little. He’d been in the business; he knew not only what was relevant but also that some leads were worth following simply because they were intriguing.

Sure, I did have Josh. But though he was my partner in life, in no way did I want him as a partner in this. I needed a snoop more than a logician. An airtight case was one thing, but I was also after the living, breathing truth. And the truth could be Pete might be guilty as hell of … something or even somethings. On the other hand, I might turn out to be crazy as a shithouse rat, and maybe Josh didn’t need to know that.

Susan Isaacs’s wry humor permeates the novel, bringing lightness to a surprisingly methodical case-building exercise as Corie works on the slimmest of hunches to discover whether Pete is actually the bad guy she suspects he is. The attention to detail is excellent as Corie and her dad utilize their lifetimes’ worth of skills and contacts to do a deep dive on a guy so innocuous that only a bored former investigator would be roused to suspect him of any misdeeds.

Takes One to Know One veers into some serious thriller territory near the end, and the aftermath is dealt with in the same meticulous manner as the rest of the book. It’s a highly realistic, well-fleshed-out tale of a Long Island housewife who goes looking for trouble and stumbles across far more than she bargained for.