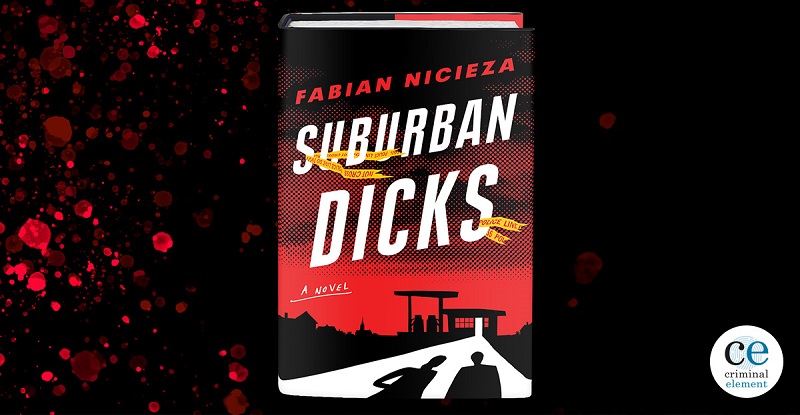 From the very first page, Suburban Dicks flies out of the gate at top speed:

Satkunanathan Sasmal would have been the first to admit he’d had worse nights working the midnight shift at his uncle’s Valero station.

There was the old lady who fell asleep while driving and plowed into the first island. Satkunanathan barely hit the kill switch on pump three before diving out of the car’s path. The woman rolled down her window and asked him to fill her tank. Regular. Cash.

And then there was last night, when Satkunanathan Sasmal was murdered.

Poor Satkunanathan may not get a lot of screen-time, but his death proves to be an explosive catalyst that exposes another racially motivated crime: this one covered up for over fifty years.

Andrea Stern didn’t intend to get involved in the investigation. Her youngest daughter simply needed to pee, and she pulled into the gas station turned crime scene to tend to the issue. But once the former profiler—now a heavily pregnant housewife saddled with four other children and a distant husband—sees the murder victim, her brain instinctively kicks into overdrive, putting the pieces of the puzzle together.

At the same time, disgraced reporter Kenny Lee catches wind of the story, the first murder in the area in decades, and begins to dig deeper, convinced the police are hiding something. Something more is going on than a simple robbery of drug-motivated hit, as the West Windsor Police Department initially claims.

In next to no time, Andrea and Kenny’s separate lines of inquiry converge and the pair find themselves uncovering a massive criminal conspiracy dating back to the ’60s, laying bare simmering racial tensions in the community and discovering proof that the present murder of Satkunanathan Sasmal was committed to hide the secret slaying of another young man.

“All of them?” he asked, thinking of Benjamin.

“No, probably not. But someone at the highest level is influencing the information they’re relaying to you.”

She nodded and stared across Grover’s Mill Pond. The late afternoon sun was lowering to the west. It cast a sparkling sheen across the water. She watched a cormorant leave its perch and fly off.

Both Andrea and Kenny are former wunderkinds—she created a profile that brought down a serial killer before she was even accepted to Quantico, while he won a Pulitzer at twenty-two for exposing a corrupt governor—who have suffered falls from grace. In Kenny’s case, his thirst for fame led to him falsifying sources and destroying his own reputation. For Andrea, an unexpected pregnancy put paid to her FBI career before it had even really started. This unexpected case in their own backyard may prove to be a redemption for them both.

Suburban Dicks, with its plot revolving around hate crimes, institutionalized racism, police corruption, and a far-reaching conspiracy, is a timely tale. With local law enforcement compromised, it’s up to a private citizen (Andrea) and a member of the media (Kenny) to secure true justice for the victims. And it’s telling that the heroes of the tale are a Jewish women and a Chinese-American man, while the victims are Indian and African-American.

“Everyone on this list is an open missing-persons case. I filled in what information I could gather on them but a lot of it is really incomplete, which explains why I’m here seeing you.”

She looked at the list again. “Every one of these a brother?” she asked.

“And if one of those names is attached to a body I’m trying to identify, then several old white people are going to pay for his murder,” Kenny said.

She stared at him for several seconds, then said, “You’re not doing it ‘cause you’re a good person.”

“No, I absolutely am not,” he freely admitted. “But good will come of it. I promise you that.”

She took the paperwork and stamped it, jotting notes on a yellow sticky, which she slapped on the top sheet. Kenny knew that meant she was expediting the request. It could be a matter of days instead of months.

“Solve it and I’ll say you’re welcome,” she said.

Suburban Dicks is Nicieza’s first foray into novels, but he’s got quite an impressive resume as a comic writer (and as the co-creator of the fan-favorite Deadpool: Merc with a Mouth). That background with quippy dialogue and larger-than-life characters serves him well here. This is a mystery with plenty of zing to it, one that’ll make audiences laugh out loud and gasp “Ooooh!” from page to page. If Anne Rule and the Coen Brothers had collaborated on a novel, it might be something like this.

The plot unfolds at a fast-paced clip and with a great amount of confidence. Kenny is openly unrepentant about his greedy ambitions, while Andrea is a genius with plenty of regrets and a spine of steel. They’re both what I like to call Hot Mess Heroes, whose personal lives may be in shambles but who still have what it takes when things start to hit the walls. Watching the pair of them bounce off each other, and their myriad allies and enemies, is huge fun, especially once the villains begin sweating.

All in all, Suburban Dicks may be one of the most enjoyable crime stories I’ve read in recent years. Nicieza achieves a difficult balance between sarcastic amusement and realistic tragedy, never letting the story become too heavy or too light, dipping momentarily into each end as needed. There are deplorable characters, lovable characters, and pitiful losers in between. We never truly doubt that justice will be fully served by the end, but the path we take to getting there twists and turns in interesting directions.

In this age of Netflix’s Unsolved Mysteries reboot, with podcasters like the gals of My Favorite Murder and bloggers like Michelle McNamara rallying to solve cold cases, Suburban Dicks fits right in and is sure to delight a similar audience.