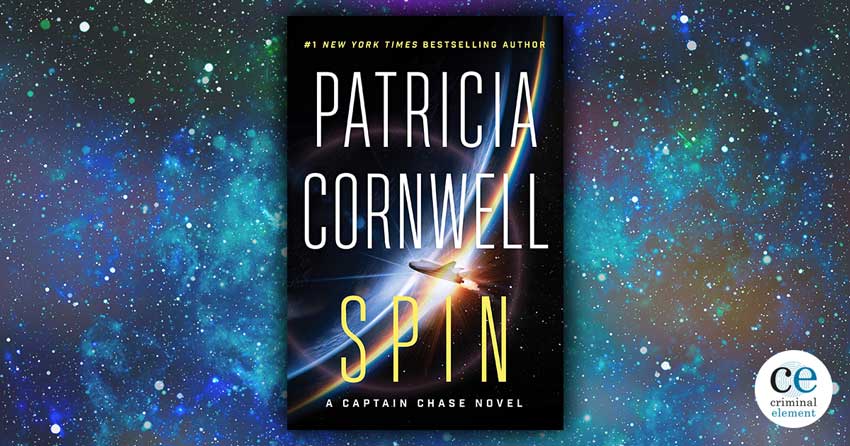 Spin by Patricia Cornwell is the second Captain Chase novel, where Calli Chase races against time to thwart a plot that leaves the fate of humanity hanging in the balance.

Patricia Cornwell is no one-trick pony. Arguably, she created the modern-day forensic thriller with her unmatched Scarpetta series (in my opinion, only author Kathy Reichs and her Bones series even comes close). Outside of some standalone work and shorter series, she has written what she knows best. That is until she came up with this terrific Captain Calli Chase series.

Prior to releasing the first novel in this series, Quantum, Cornwell spent two years researching space, technology, and robotics at Captain Calli Chase’s home base, NASA’s Langley Research Center, and studied cutting-edge law enforcement and security techniques with the Secret Service, the U.S. Air Force, Space Force, NASA Protective Services, Scotland Yard, and Interpol. The outcome shows the results of these efforts, and the second release in the series, Spin, is even better than the first novel.

To begin with, Captain Calli Chase has a twin sister named Carme. They get along, for the most part, but Carme is the more outgoing of the two, with a slightly homicidal streak in her. Ever since the first novel, Carme has been on the loose while Calli is keeping up appearances in her role as a NASA investigator, scientist, and Space Force Pilot.

For Calli and her leaders, things start out with a bang. A NASA rocket launch is hacked into by unknown forces and blows to bits, killing many people in the process. Not only will Calli have to spend the rest of the novel tracking down the guilty party, but she will also learn more about who she and her twin sister really are and what their true purpose is.

After an incident where Calli’s sister saves her from a maniac trying to kill her during a highly dangerous chase scene during a snowstorm, Calli wakes to find herself restrained to a bed in an unknown chamber. She is there under the control of the man who she calls her boss, Dick Melville. Before he will let her go and investigate the NASA rocket launch, he must inform her about what her role is. He also lets her know that she will not be alone. Not only is Carme somewhere out there on a parallel mission but Calli is now equipped with a permanent smart device, worn through a pair of specialized contact lenses, called ART. She can correspond with ART, who can show her things through the lenses that only she can see—in addition to helping guide her new SMART suped-up vehicle as a sort of super GPS. The ongoing discussions with ART are some of the best parts of this novel.

The only issue I have with Spin is that it is acronym crazy; I would have liked to have had a glossary of the dozens of acronyms used within the story because it became distracting at times to try to remember them all.

Spin‘s antagonist appears to be the megalomaniacal billionaire Neva Rong, whose own sister, Vera, was killed in the rocket blast. She works with the organization Pandora and may have ulterior motives in creating all this anarchy. For instance, she may be trying to pin the blame for hacking into the deadly rocket launch on a 10-year-old wunderkind named Lex Anderson, who Calli’s father, George, had taken under his wing as the youngest and most brilliant intern working on a NASA project.

Everything comes to a head in the high-octane finale where Captain Calli must take to space once again to confront an unknown object that was initially thought to be a satellite but now appears to be some sort of ship speeding towards the Space Station to take down vital communication between the governments of the world and access to outer space pathways. Those who have a love of classic literature will love the acronyms used for these unknown spacecrafts. Spin finishes with a sort of cliffhanger in which our villain is revealed and Calli Chase discovers the lengths to which this deadly plot will go. It makes me glad that Patricia Cornwell has stepped away from her Scarpetta novels as I cannot wait to see what happens with the engaging Chase sisters next!