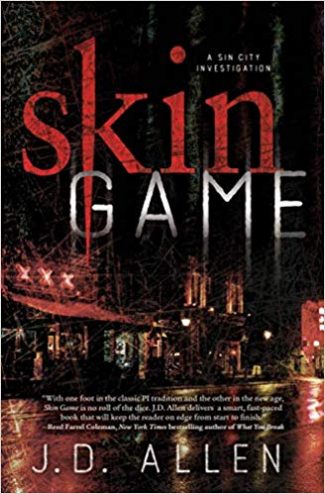 J.D. Allen’s Skin Game is the second book in the Sin City Investigation series, featuring Private investigator Jim Bean. The arrival of his ex-fiancee reminds Bean of his tragic past, but it’s also key to the discovery of a human trafficking ring and one of Vegas’s most influential mobsters.

J.D. Allen’s Skin Game inhabits a few spaces simultaneously and packs elements from diverse genres. It’s a classic private investigator narrative with all the tropes commonly tied to that type of story, but it also delves deep into truly horrific things like abduction, the impact of being sexual assault accusations, and human sex trafficking. Furthermore, it contains a story of lost love and explores the process of starting all over once someone’s life is destroyed.

Jim Bean is not Jim Bean. The name is new and his life is new.

Jim Bean is not Jim Bean. The name is new and his life is new. He has struggled to forge an entirely new identity in Vegas after his previous life collapsed following false sexual assault accusations. In his new existence, he is a private investigator who mostly deals with infidelities. Then his ex-fiancée Erica Floyd, who didn’t stick by him during the horrendous process following the accusations brought against him, reappears in his life. She is looking for her missing sister, who vanished without a trace. Jim doesn’t want to take the case, but can’t bring himself to say no. With a maelstrom of emotions making everything more difficult than it has to be, Erica and Jim soon find themselves digging deep into the case, which leads them to mob connections and a dangerous human trafficking ring operating out of a strip club.

Skin Game is one of those novels in which the author is fully aware of the plethora of tropes present in the narrative, and uses that to keep the material entertaining. Jim is brokenhearted and drinks heavily while living in a crappy apartment. Vegas is an unglamorous beast full of mobsters, casinos, and strippers. At different points in the story, the friend endowed with special skills shows up to help, the couple almost fall back into each other’s arms, and a brilliant hacker gets Jim all the information he needs. These elements are all classic and bring nothing new to the table. In fact, they do more to perpetuate the clichés of hardboiled PI novels than anything else. However, Allen seems to understand this, and she overcomes these clichés. She makes the narrative engaging and adds a layer of emotional depth by touching on the awful effects of human sex trafficking and explores the way it can devastate women for life, even if they manage to escape. Also, while there is a bit of humor sprinkled throughout the story, there are serious moments that touch on uncomfortable subjects. Jim’s accusations are the perfect example. Here’s how he describes mentioning the words sexual assault to others:

“The mere combination of syllables frightened women. The idea of it angered men. Disgust always crossed once-friendly faces. Always would. That was why Alexis had urged him to come to Vegas, to start over. Everyone here had a past, but no one cared what it was. No one would have to know his.”

Besides the important themes it touches, there is an additional element that elevates this read—there are passages in which the pace becomes frenetic and perfectly matches the narrative. There are a few tense moments and a lot of action in the last third of the book, and Allen’s writing becomes tighter and faster to match the speed and intensity of the events that go down on the page:

“Jim saw Oscar at the top of the stairs, two guns drawn. Standing still. All threats eliminated. Erica struggled one last time. Jim yanked her to his chest. Her eyes were closed tight, tears streaming, but she managed well enough to aim that damned sprayer dead to rights. Pressed the nozzle. Jim let go. She ran.”

Skin Game never tries to be more than it is, and that works in its favor. This is a fast, fun, sometimes sad crime novel that stays inside the confines of the PI subgenre. Instead of trying to stay away from the tropes associated with this type of narrative, Allen uses a lot of them in effective, entertaining ways. This could sound like a critique, but it’s not. Trying to reinvent the genre while writing about a PI with a drinking problem hiding from his past in Las Vegas could have ended in many bad ways. Instead, fully engaging with the expected tropes, Allen turns the novel into something akin to comfort food for those who enjoy this type of story. That is important, and it will surely make fans of classic PI novels place Allen on their radar and keep an eye out for whatever she does next.