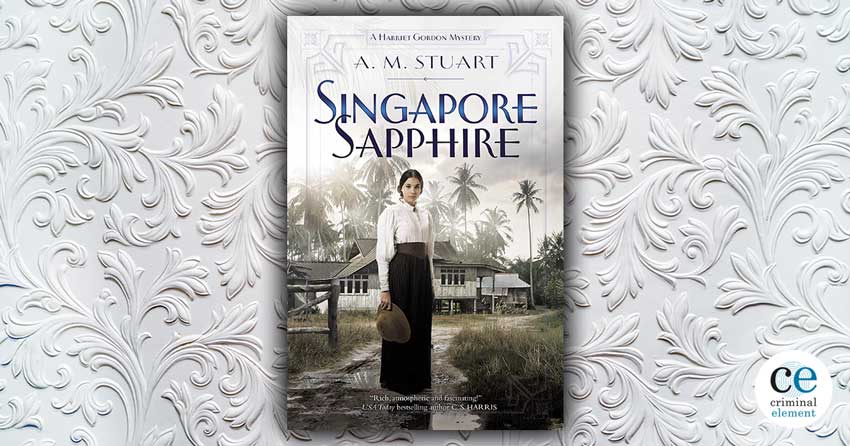 Singapore Sapphire by A. M. Stuart is the first book in the new Harriet Gordon Mystery series set in early 20th-century Singapore, where Gordon and Inspector Robert Curran must suss out a murdering secretive gang before they themselves become the next victims.

I’ll admit that when I first started reading Singapore Sapphire, it was with a sense of caution. Coming from Malaysia, I’m both partial to and wary of novels depicting the region, and while I was excited to hear about this mystery series set in the early 20th century, I was also concerned that it would whitewash the many large and smaller ills of colonialism.

Fortunately, we’re in good hands with A. M. Stuart, whose authorial voice never excuses abuses with a “that’s just how things were” attitude, instead gifting her characters—and particularly the leads—with a critical eye to empire and what constitutes social correctness.

First, of course, we have Harriet Gordon, the series’ namesake, a young widow who came to Singapore looking for a fresh start. Her brother, Reverend Julian Edwards, is headmaster of the St. Thomas Church of England Preparatory School for Boys and has been allowed by the school worthies to have his sister join him in exchange for her room and board. In order to gain some measure of financial independence, Harriet advertises her services in the local paper as a discreet typist and secretary. Her very first client, Sir Oswald Newbold, engages her to type out his memoirs, exactly the kind of work she was looking for—until she returns to his house the next day to find him stabbed in the throat with the memoir the only thing missing from his ransacked home.

This, of course, brings Inspector Robert Curran, the second of our leads, into the picture. An ethical man with an unusual background, he’d traveled the world before settling in the Straits colonies as a police detective, a move that elicits curiosity from his friends and colleagues.

“Why did you become a policeman, Curran?” Mac asked.

Curran shrugged. “I needed a job,” he said.

Mac cast him a skeptical glance. “If you needed a job, there were plenty of others. Bank clerk, for example.”

Curran laughed. “Can you see me as a bank clerk?” He stubbed out his cigarette and sighed. “In South Africa, I saw a great deal of injustice meted out by our side as well as the Boer. I decided there had to be ways of seeing justice done properly.”

“You could have become a lawyer.”

Curran curled his lip in distaste. “I’d rather be a bank clerk.”

Curran’s lack of sentimentality is matched by his refusal to allow prejudice—except in the case of lawyers—to cloud his judgment. Where others might dismiss Harriet’s keen eye and steady manner for their possessor being a woman, Curran finds himself beginning to rely on her not only for information but also for assistance, despite her clear distaste for the police force. When another body is found, also dead from a throat wound, the two must join forces to rout out a secretive gang that will not hesitate to eliminate anyone in their path, our heroic duo included.

I enjoyed the layers of mystery in this novel, as allies and villains alike are unmasked in the course of Harriet and Curran’s investigations. I also very much appreciated the choices Ms. Stuart made with regards to romance in this novel, eschewing the typical boy-meets-girl plot line in order to reinforce Harriet’s sensitivity to the feelings of others instead. I personally felt that the emotional arc she did go on was much more satisfying than any romance would have been. That said, there is plenty of room for such in sequels, which I’m already quite looking forward to!

Another reason I’m anticipating more of these books is Ms. Stuart’s wonderfully evocative descriptions that capture both place and people, as in the scene here where the second body has been found:

Death, exacerbated by a tropical climate, had its own sickly pungency, and the stench hit Curran even as he pushed his way through the crowd that gathered in the still, pale early-morning light on the banks of the Stamford Canal. Owing to the early hour, the crowd comprised mostly dhobi wallahs.

This stretch of the canal was one of the dhobis’ favorite spots. They had easy access to the water and could set their washing to dry on the open land that ran up from the bank of the river toward the Indian community, clustered around Serangoon Road and Bencoolen Street. Now they jostled against the restraining arms of a small cohort of police for a better view of what looked like a pile of wet, stinking rags that had been pulled from the canal and lay amidst the bundles of laundry.

Singapore Sapphire is a remarkably sensitive look at life in Singapore in 1910 with a wealth of historical detail as well as rich characterization. Harriet and Curran are terrific leads who I’m hoping build a strong friendship as they continue to solve murder cases together in the tropical heat I’m so familiar with and don’t really miss but enjoy experiencing again from their perspectives.

Check out A. M. Stuart’s guest post about fingerprints in the 19th century!