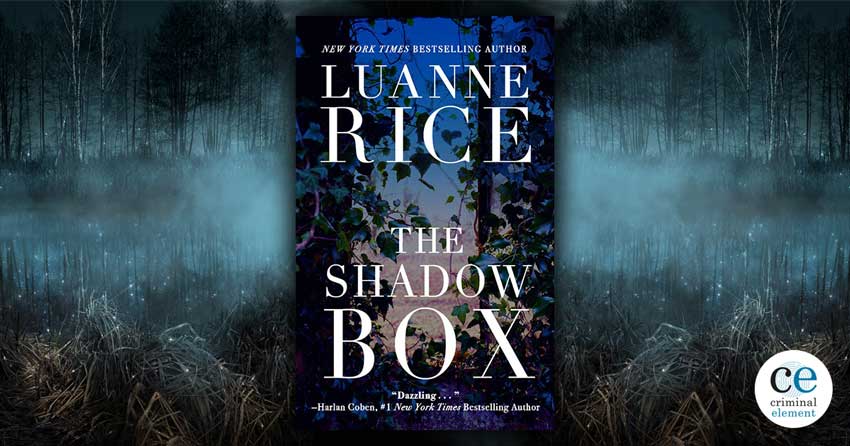 The Shadow Box by Luanne Rice is a haunting thriller about how far one wife is willing to go to expose the truth―and the lengths someone will go to stop her.

New York Times bestselling author Luanne Rice is a tried-and-true fan favorite. She has written 35 novels that have been translated into 24 languages and adapted for television by CBS, Hallmark, Lifetime, and TNT. While best known for her contemporary/women’s fiction, she has not allowed herself to be confined to any one creative landscape. Last year, she ventured into crime fiction with the Amazon Charts bestselling Last Day; Rice continues that ambitious trajectory with February’s domestic suspense title, The Shadow Box.

On the evening of an exhibit featuring her nature-themed shadow boxes, artist Claire Beaudry Chase fails to appear among the assemblage of family, friends, and fans. Her husband, state’s attorney for Easterly County Connecticut and gubernatorial candidate Griffin Chase, is concerned by this uncharacteristic faux pas and leaves the reception early to check for her at their posh, private Catamount Bluff home; he is assisted in this endeavor by Detective Conor Reid (who also appeared in Last Day). There, in the garage, they find evidence of a struggle: blood, splintered wood, and cut rope. Despite this clear evidence of foul play, there’s no body. Just what became of Claire?

While investigators can’t say what exactly happened to her—or even if she survived the encounter, given the amount of blood left behind—readers know that a grievously injured Claire has escaped into the woods surrounding her waterside property. But what to do now? After all, she is convinced that Griffin is her would-be-murderer—though a mask prevented her from seeing his face—and his deep connections within law enforcement and the community at large leave her skeptical about who, if anybody, she can trust. Especially given the secret she’d been about to reveal. The one that would cost Griffin his political prospects and his freedom. The one that he’d kill to protect.

There are skeletons in Griffin’s closet; there are also keepers of those skeletons. Then, there’s the matter of a boat explosion that kills interior designer Sallie Benson on the same night as Claire’s disappearance. But are the two events related? The narrative alternates perspectives (Claire, Conor, Sallie, etc.) and timeframes, gradually clarifying the crimes at hand, the circumstances that led to them, and the eventual disillusionment of a seemingly charmed life. On a macro level, it’s a study of power, privilege, and perception; on a micro level, it’s a study of how power, privilege, and perception can corrupt a marriage. While Rice may be new to genre fiction, her work has always focused on character, conflict, emotion, and motivation—and those are the things that often define criminal behavior.

The Shadow Box, then, is a captivating read as much for its illuminating portrayal of domestic disenchantment as for its requisite, and robustly handled, mystery elements (which include abuse, kidnapping, murder—and mermen). Indeed, this book stands as a clear example of why crime novels lend themselves so well to explorations of real-world issues. These dark thematic elements are countered by the healing virtues of creativity, nature, and self-determination, which fuel Claire’s redemptive journey. Ultimately, Luanne Rice has given us a deeply affecting meditation on how we both lose and find ourselves, proving once again that she’s a luminary in any, and all, literary realms of her choosing.