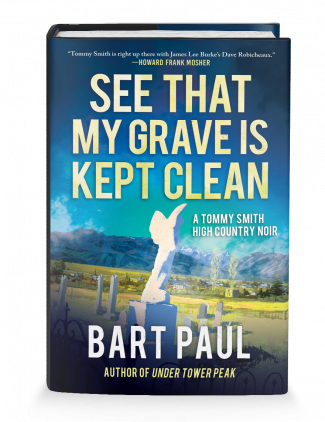 See That My Grave Is Kept Clean

Bart Paul’s See That My Grave Is Kept Clean is a mix-up of Western and mystery with a taciturn hero and a twisting plot, wrapped in lived-in details. Fans of James Lee Burke and Craig Johnson should take note of this third installment of the Tommy Smith High Country Noir series.

The latest by Bart Paul is labeled a “High Mountain Noir” and the label fits. I was a fan of Paul’s first Tommy Smith novel, Under Tower Peak, and this, the third in the series, continues the action quite well.

There’s a missing girl in the high sierras, a (different) body is found, an unsolved crime comes back to life, Tommy’s family is threatened. Paul packs the plot with many threads that weave together nicely. Any missing child plot sets a nice ticking clock.

“Jack Harney wondered if you’d help him tomorrow,” she said. She sat next to me at the plank table by the fire pit and put her arm around my neck.

“Doing what?” I knew the answer to that well enough.

“If that child isn’t found tonight,” she said, “he wants to bring up his new dog and he wants you to go with him.”

“Let’s just call it a search and rescue dog for now.”

Tommy is always a reluctant hero. And ex-Army sniper he is constantly trying to stay free from trouble but it always seems to find him. He’s often his own worst enemy though, adhering to a mountain-man-meets-cowboy code of ethics that can put him on the wrong side of the law when he sees injustice. Lucky for him he’s now married to a cop.

He turned the headlight back into my eyes. The back-and-forth was giving me a headache. I guess we weren’t sharing our plans and dreams any more.

“Now, you know how important that money is. Clock’s ticking, rifleman. Otherwise there’s no place you and that cute little family of yours can go that’ll–”

“First thing, Sonny, I don’t have any money except what I earn. Second, it’s the feds poking around missing bank accounts, not me. Maybe some computer hacker ripped off the bank and is sitting in the Caymans right now laughing at chumps like you.”

“Brave talk from a guy who doesn’t even carry a weapon.”

“You think I need a weapon?”

Tommy has a healthy dose of Clint Eastwood to him. All he really wants to do is keep running his pack and camping business running and spend time with his horses and his family. When a motorcycle-riding mystery man comes sniffing around for some missing money and making claims to the missing girl as well, Tommy finds himself drawn in and the action is off to the races.

Several unexpected twists keep the plot moving along nicely, even when there are a little too-lengthy detours into the horse and camping business.

The revelations and double-crosses come fast and furious and there is plenty of action and ratcheting up of the stakes.

Bart Paul is an avid horseman and he includes details about the business Tommy runs in between the thrills. Sometimes too many details. Paul has never seen a tree he didn’t want to identify or a piece of horse tack he didn’t want to describe in detail. They aren’t just horses, they’re palominos and sorrels. He details saddle horns and bridles beyond what really helps the story, but this is a small quibble. Paul clearly knows his stuff and by the end, you will too. Many readers will like being deeply embedded in Tommy’s high mountain world.

The story starts off quickly and gets right into the tangled web. The revelations and double-crosses come fast and furious and there is plenty of action and ratcheting up of the stakes.

I looked back, catching sight of Jack now and then and hearing him talk to the dog. His voice got excited, which never happened with Jack Harney. The I head him shout.

And can we talk about that title for a moment? One of the best in recent memory. An epigraph credits it to a lyric from a Blind Lemon Jefferson song and it’s ripe for a book title.

Starting at the beginning of the Tommy Smith books (which also includes Cheatgrass) isn’t a necessity to enjoy See That My Grave Is Kept Clean, but it will help. Tommy has a rich backstory and a history with several characters that will benefit from reading the other books. But for mix of mystery and high mountain adventure, Bart Paul has a winning series that’s worth saddling up and taking the ride.