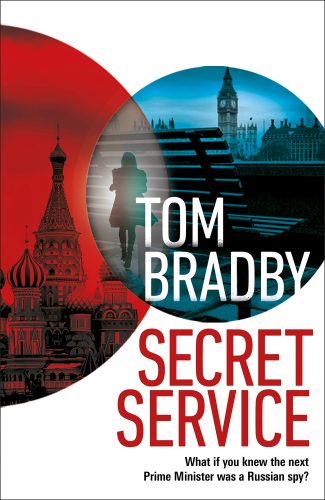 From British journalist and bestselling author Tom Bradby, Secret Service is a thriller that follows senior MI6 agent Kate Henderson as she races to unmask a Russian mole in the UK government.

What if your next national leader was a Russian spy? Oh man, can you even imagine? A prime minister or, say, a president, completely in the thrall of some shadowy Russian spy agency, kept by his or her masters on a tight leash via some kind of highly blackmail-able information? Such a scenario would cause national panic! An outcry from angry voters! Or…maybe there would just be a hard-fought but fruitless investigation by the country’s top intelligence professionals and, ultimately, a collective shrug.

That’s the case with Tom Bradby’s latest thriller, Secret Service. Those looking for some kind of catharsis from the daily political nightmare that is modern life in the United States and in Bradby’s home of the United Kingdom will find little comfort in the book. Perhaps its Bradby’s background as a journalist that gets in the way, or maybe it’s the fact that reality is so strange and outlandish that it can easily outpace fiction. Whatever the case, Secret Service falls flat. Though the premise is full of explosive promise, it never fully ignites. The same goes for Kate Henderson, Bradby’s protagonist, who gets saddled with too many domestic concerns and doesn’t seem to get enough time tracking down traitors and spies.

The book opens in Istanbul, where Kate and her team of MI6 operatives are ready to bug a Russian oligarch’s yacht. Kate has inside intelligence that a big meeting is slated to take place on the yacht, and sure enough, the heads of Russia’s secret services show up for sit down with the oligarch. The meeting yields a bombshell: the British prime minister is going to step down in a few days and one of the leading candidates to replace him is a secret Russian asset. And even worse, there’s a Russian mole at the heart of the British government who’s helping move the plot along.

The two primary candidates for prime minister, James Ryan and Imogen Conrad, present their own complications. Ryan is a long-time establishment conservative who also happens to be a former school chum of Kate’s boss, the head of MI6. And Conrad’s right-hand man is Kate’s husband, Stuart, who finds his loyalties torn between his wife and his boss.

There’s a lot of material here—perhaps too much, and Bradby often loses the thread. Some early tense action gives way to a slow-moving investigation, as Kate and her team try to suss out the clues, overt and subtle, that can point out the traitor:

“…However, her record on Russia is a bit odd.”

“When she became a minister, she was very voluble, particularly about the murder of Alexander Litvinenko, which had happened a few years before she joined the Foreign & Commonwealth Office. She took a very tough line, demanding stiffer sanctions and actually getting them imposed on a wider section of the president’s inner circle. … She’s barely spoken publicly about Russia since.”

“So her silence on that subject is hardly surprising.”

“Maybe … But on most of her other favorite subjects – human rights in China, Tibet, Saudi Arabia – she has continued to be quite frequently and widely quoted.”

There are interviews with old school friends and former members of Parliament and shady business associates and so on, but none of it pops—a shame for a book that should make the thrill of the investigation its core. In fact, the biggest revelations happen off the page and are too quickly dealt with. Bradby namechecks John le Carre, of course, but the book is really missing the excitement that comes with le Carre’s characters putting all the pieces together and seeing the shape of the problem they’re in.

There are other odd notes. For members of the secret service, Kate and her team are oddly chatty about their ongoing investigation, especially since it’s about such a sensitive topic. Kate tells her husband early on that she’s charged with looking into his boss—and, by extension, him. The search for each candidate’s ties to Russia—and for the mole in the British government—stirs up some personal scandals too, and yet everyone is upfront and amicable about the conflicts of interest. It all feeds into the book’s general lack of urgency. The election of a new prime minister, one who could be controlled by Russia, is imminent, but the pace is slack. Sometimes Kate is focused on uncovering the truth about the candidates; other times, she is trying to flush out the mole.

But largely—and this is maybe the book’s biggest weakness—she is wrestling with the struggle of ‘being a woman’ and ‘having it all.’ Along with her job, Kate also juggles taking care of her two kids, her aging mother, and, for good measure, an ailing dog. There are various family problems, as well as Kate’s contentious relationship with her mother, who cheated Kate’s father with a family friend and upended their family. None of the family drama is particularly urgent or, really, dramatic, and even though Kate should have enough going on with unmasking Russian spies and saving democracy, she still comes down on herself:

“I suppose it depends on how you define the front line. I could put it down to losing someone this week, a young girl who deserved an awful lot better, and knowing beyond a shadow of a doubt that it was my fault. I could also claim it’s because we’re all overworked and underpaid. I might even blame it on the fact that, like every middle-aged woman, I find trying to be a mother and a wife at the same time as a warrior for truth is not as easy as we all feel the need to make it look. But I’d be able to live with that if I didn’t feel we’re being overwhelmed by an incoming tide that we’re completely powerless to hold back.”

It’s weak character work for a protagonist who could, and should, be better. All these details may seem like complications, but they’re really just rote stabs at shading in a character, so familiar that they’re mostly a parody at this point.

Fortunately, for readers at least, Kate does uncover the mole and sort of identifies the Russian asset who may or may not become the next prime minister. But even these reveals lack any real punch. Secret Service asks, “What happens when a government’s top person is on someone else’s payroll,” and the answer is, “Not much.” It’s an answer that’s too close to reality to be interesting and too timid for a thriller that’s in dire need of more action.