November 3, 2022
In Mark de Castrique's Secret Lives, an elderly Nancy Drew-type character—sure of herself and her convictions—is ready to bend a few rules to achieve her goal of seeing justice done. Read on for Doreen Sheridan's review! 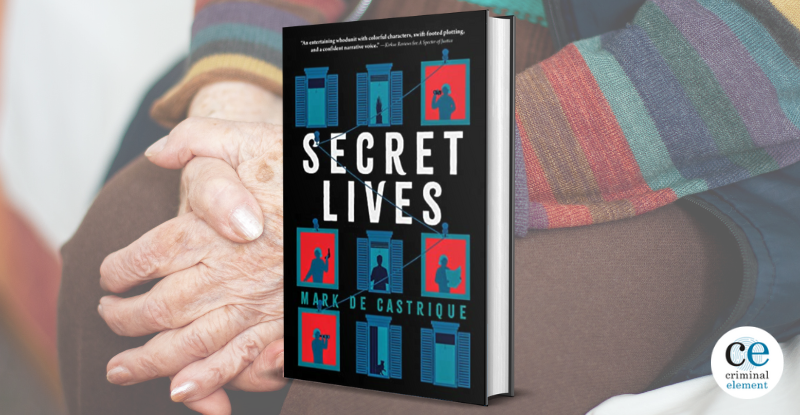 Jesse Cooper is your average computer science student at American University. Perhaps the most unusual thing about him is that he lives with his double-first-cousin twice-removed, the redoubtable Ethel Crestwater. Now in her seventies, Ethel essentially runs a boarding house for federal agents and other law enforcement officers in her Arlington, Virginia home. Since Jesse is the only family she has left, she’s more than happy to have him stay with her while he works on his postgraduate degree.

One night while Skyping with his girlfriend in London, Jesse hears shots from right outside the house. He runs downstairs to find one of his housemates, Secret Service Agent Jonathan Finch, bleeding out in the road. Ethel was woken by the noise as well, and quickly takes charge of the situation, after their attempts at staunching the bleeding come to naught:

“Jesse, we don’t have much time.” Ethel used a dry corner of her robe to wipe the blood off her phone. “I want you to observe everything you can.” She activated the phone’s light and video app and then ran it up and down Jonathan Finch’s body.

Jesse stared wide-eyed, having trouble pulling his gaze from the elderly woman to the target of her recording.

“Come on. I want an extra set of eyes. I don’t depend upon technology.”

While Jesse knew Ethel had once been an FBI agent herself, he’d hardly expected to ever see her put her formidable skill-set to work. But being a smart man, he does as instructed, even as he worries that her efforts are technically obstructing justice, given what she asks him to do next. Thing is, Ethel knows pretty much from her first glance at the crime scene that Jonathan’s death isn’t a random crime to be solved by the local police department. The Secret Service will likely want to be actively involved, especially after Ethel discovers hints of corruption leading back into the agency.

One of the men responsible for the shooting is, indeed, a former colleague of Jonathan’s. Trevor Norwood is not happy that what should have been a slick, bloodless robbery had gone sideways so quickly. But that isn’t the only surprise in store for him; when he gets into the laptop he stole in order to cover his tracks, he makes a startling discovery about Jonathan’s resources:

Norwood stared in disbelief. The pain in his arm and the incriminating gym bag of counterfeit currency were momentarily forgotten. The coins in that second [cryptocurrency] wallet had a current value of more than twenty million dollars. Where did a Secret Service agent get that kind of money? If the private key was on Finch’s laptop, Norwood would find it. […] For all the crap that had gone down that morning, twenty million dollars would more than make up for it. Norwood faced a hard decision. Did he keep this knowledge to himself or did he bring in the others? One thing he knew for sure. If he didn’t bring them in and they found out, Trevor Norwood would be as dead as Jonathan Finch.

As Norwood sweats over what to do, Ethel and Jesse team up to not only track down him and his accomplices but also to outwit the various forces trying to keep an eye on their investigations. Ethel has lots of contacts in law enforcement due both to her prior work history and to her ownership of the boarding house. Trouble is, she fears that one or more of those contacts may be involved in the conspiracy that ended up killing poor Jonathan. The only person she knows she can absolutely trust is Jesse, as they seek to uncover the truth and find justice not only for Jonathan but the widow and child he left behind.

This was a very of-the-moment thriller, featuring an elderly detective and her younger sidekick grappling not only with interagency shenanigans but also the very modern complications brought about by the rise of cryptocurrency. It’s so much fun to follow along as Ethel outwits the many people trying to claim the money for themselves, even as I, like Jesse, constantly worried at how her fearlessness occasionally crossed the line into recklessness. As a resident of the DC-Metro area (and someone who used to live and work on Wilson Blvd.), I was also greatly pleased by the attention to detail, and hope this is only the first in a series featuring both my former stomping grounds and this entertaining intergenerational detecting duo.