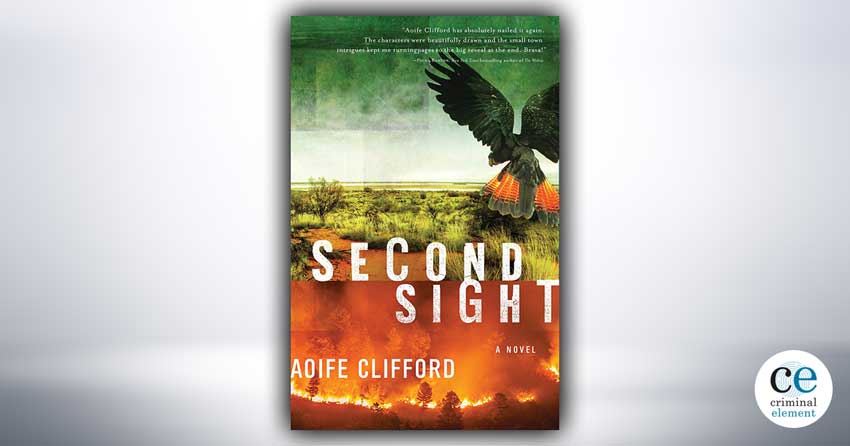 Second Sight by Aoife Clifford follows lawyer Eliza Carmody, who returns to her small hometown after a destructive wildfire and witnesses a crime that draws her back into the mysteries of a childhood she thought she’d left behind for good.

The Greek philosopher Heraclitus once said, “No man ever steps in the same river twice, for it’s not the same river and he’s not the same man.” What is it like to return to your hometown as an outsider? Not just any outsider but someone whose job it is to fight the folks you grew up with.

Lawyer Eliza Carmody arrives in Kinsale and witnesses a vignette that rockets her 20 years into the past.

Here it begins. Trouble, I think, when I see the two of them slinking out of the pharmacy. There is nothing more dangerous than a bored teenager in a country town. It’s when the stupidest ideas start making sense.

The little Australian town of Kinsale is every beach town in high season, packed with tourists, all with frayed tempers and a tenuous hold on patience. On her way to meet an expert witness, Eliza observes a nasty flare-up between a careless woman driver and the driver of the car she rams. It’s road rage that morphs into violence and bloodshed. Her old friend Luke Tyrell (of the rammed car) punches an interfering green-hat-wearing Good Samaritan. Eliza describes it to the police as a “king hit.” So much for making her appointment.

One of the cops on the scene is her brother-in-law, Senior Sergeant Gavin Pawley, who is surprised to see her shaken and covered with blood. Eliza doesn’t tell him the real reason she’s in town but lies and says she’s there to visit Amy Liu. Willy-nilly, Eliza lands on Doctor Amy’s doorstep, her bestie since Eliza “tried sucking on her licorice black plaits in kindergarten.” Amy wants all the details.

I see a raised fist and then the punch.

“Definitely,” I say. “Remember the fights he used to get in at school? I thought he’d have grown out of that.”

Amy sighs. “It isn’t only Luke. This whole town’s on edge ever since…”

“The bushfire was almost two years ago,” I interrupt. “You can’t use that as an excuse to go crazy.”

“Tell that to my waiting room,” she answers. “It was his girlfriend who got trapped in her car. He lost his property and I hear he was underinsured. Luke’s been working odd-jobs to earn money to start rebuilding. He’s part of your class action.”

Amy is Eliza’s life-long friend, but she doesn’t shy away from asking why Eliza took the case. Eliza defends her decision—as a partner, how could she turn down the work? Amy says the obvious, “Most solicitors didn’t grow up in the town that Colcart almost burnt down.”

Amy is eight-months pregnant, her blood pressure is high, and her husband, Gus, intimates she shouldn’t get worked up. The women have a rambling conversation, sighing over a picture of Grace Hedland, “half-smiling, half-biting her bottom lip, so she looks a little like a chipmunk.” The three girls are together in every photo, “growing older until we reach sixteen and then Grace is gone, a runaway who never came back.”

A bushfire that almost destroys a community; an old friend who is damaged, full of rage, and nowhere to be found; a teenager who vanished more than 20 years ago. Aoife Clifford deftly adds incidents to a growing pile of anomalies. Something is very wrong in Kinsale. Remembering watching the bushfire on television, Eliza recalls feeling bad for everyone while thinking that she was insulated, that she had put “everything in Kinsale behind me twenty years ago.”

Pretended I could switch off the footage and walk away.

Perhaps that was a mistake and the wind is changing direction.

Second Sight revisits New Year’s Eve 1996, the night everything went pear-shaped. The relationship between Amy, Eliza, and Grace changed, not always comfortably, as boys entered the picture. Eliza’s thought when she returned to Kinsale—that there’s “nothing more dangerous than a bored teenager in a country town”—suddenly feels heavy with portend. Grace spotted Eliza and Luke fooling around in the sand, grabbed her sandals, and ran away up the beach. It’s the last time anyone ever saw her.

When Eliza is back in the city, she visits the hospital where Green Hat—Irishman Paul Keenan—is being treated. He’s in rough shape, but his brother Donal, newly arrived from Ireland, is hopeful, saying to Eliza, “Smacking your skull into the road is never a good idea but he’s a tough fucker.” Donal notices that Eliza not only has eyes that are different colors but one of them is slightly misshapen (courtesy of a stick thrown by her sister Tess).

I confess that it wasn’t entirely bad because I used to pretend it gave me special powers and that I could read people’s minds.

That wouldn’t be a bad attribute for a lawyer to possess, an “ability to perceive future or distant events; clairvoyance.” Or would it be like having Cassandra’s curse, doomed to “utter prophecies that were true but that no one believed”?

Paul Keenan doesn’t make it; Eliza goes home for his memorial service. Luke is still on the lam. She fights with her younger sister, Tess. Donal shows Eliza Paul’s duffle bag. Inside is over 15 thousand dollars. By the time Paul arrived in Australia, after traveling the world for six months, he was dead broke. How did he make that much money, Donal asks?

“What if the punch wasn’t about that woman in her car? What if it was something else altogether?

Topping off a shattering day, Eliza learns that human bones have been uncovered at The Castle, a childhood landmark.

What’s a solicitor to do but follow the clues no matter where they lead, starting with her class-action. The night before Eliza returns home for Paul’s service, she read the expert’s report: “… it was clear that Colcart’s lack of maintenance was a significant factor in starting the fire and the smart thing would be to settle the case.” Americans may be reminded of California’s Pacific Gas & Electric’s culpability in the horrific Paradise camp fire. Second Sight, however, is an intricately constructed story where the obvious conclusion is probably wrong. It’s the essence of a satisfying page-turning thriller.