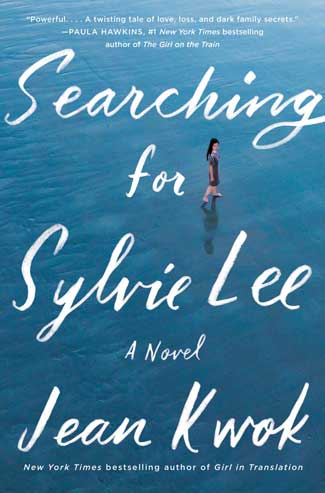 Searching for Sylvie Lee by Jean Kwok is a poignant and suspenseful drama that untangles the complicated ties binding three women—two sisters and their mother—in one Chinese immigrant family and explores what happens when the eldest daughter disappears and a series of family secrets emerge.

Sylvie Lee was raised in the Netherlands by her grandmother at the behest of her mother’s cousin, Helena Tan. The daughter of Chinese immigrant restaurateurs, Helena is a Dutchwoman of means who went back to her parents’ Chinese hometown to find herself a handsome husband. After having baby Lukas, Helena wanted to solidify her claim to her aunt’s continued presence and care by sending away to America for her cousin’s daughter to be a playmate for her own child. Sylvie’s Ma resisted, but after a frightening xenophobic assault on the streets of New York City, she decided that it would be best for Sylvie if she went to live with the far-better-off Helena:

I wrote to Helena to say I would bring my baby girl in the tenth moon. I still should not have done it. But I was twenty-three years old, newly married, newly emigrated, and struggling not to drown in this vast ocean called the Beautiful Country. I told myself it was only for a year, and then we would bring her back. I did not know it would be nine years until I saw her again.

I held my girl close to me that endless time in the flying machine until we landed in Holland on a black day of excessive water. Then I understood: I had brought my daughter to a landscape of tears.

This choice will haunt the Lee family for years, long after Sylvie has returned to their bosom. The only person not conflicted with Sylvie’s return is Amy, her younger sister, who is merely two years old when Sylvie comes home. The sisters form a strong bond as the years progress, with Sylvie’s overachieving capability putting her in a position to protect the timid, loving Amy. Sylvie graduates from Princeton, starts a high-powered career, and marries the scion of an old-money WASP family, while Amy struggles to pursue her dream of teaching, hampered by a stutter made worse by the attention of others.

When the Lee family receives news that Sylvie’s grandmother, still residing in the Tan household, is dying, Sylvie immediately flies to Holland to be by her side. Amy misses her sister but thinks little of Sylvie’s prolonged absence until Lukas calls long distance asking whether Sylvie has arrived home yet. Confused, Amy starts to poke around Sylvie’s life in America and slowly realizes that her sister has been keeping secrets. Amy’s concern soon grows into alarm, prompting her to book a flight to the Netherlands in hopes of finding not only answers but, most importantly, the beloved sister she’s starting to believe she only thought she knew.

Told from three different perspectives and shifting back and forth in time, Searching for Sylvie Lee is a multi-layered mystery novel that seeks to discover what happened to the title character and why. The answers aren’t merely in present-day Holland but also in secrets kept hidden for decades across three continents. Jean Kwok writes with an assurance borne of having lived in all three herself, infusing her creations with a realism that rings true for so many immigrants no matter where they’re from. Sylvie, for example, will always consider Holland her home despite her roots as a Chinese-American.

No matter how many years I lived in America, I always dreamed in Dutch. Dutch was something that belonged to me, or so it seemed when I left the only country I had ever known. It was a complex language, filled with challenging sounds and a wrapped-up word order. Despite its intricacy, it was the language of my soul.

Searching for Sylvie Lee is not your typical story of Chinese immigrants. Sure, parts of it take place in America, but the bulk of it takes place in a Holland so lovingly and evocatively drawn that I had to go out for stroopwafels while reading it. It was actually really refreshing to read of the experiences of the Chinese diaspora outside of America and to see the contrast between the way assimilation happens here and in the Netherlands. This was further enhanced by Ms. Kwok’s choice to use direct translations of idioms from the Tonghanese and Dutch, particularly in Ma’s and Sylvie’s chapters. It took a little getting used to, but it made for a culturally enriching experience.

Even without its rich cultural trappings, Searching for Sylvie Lee is a universal story of loss and the cost of obscuring the truth, tempered with hope for the way forward. Reading of Amy, especially, learning to overcome her crippling shyness in order to find her sister is a heartening experience, even if the results may be less joyful than bittersweet. Ultimately, this is a haunting tale of the choices we make, the secrets we keep, and how the actions of generations can affect two women at a cultural crossroads, both seeking answers to dilemmas in their present day.

Book Review: The Butcher and the Wren by Alaina Urquhart

Book Review: The Butcher and the Wren by Alaina Urquhart

Wren Muller has worked hard to become a New Orleans medical examiner, putting in grueling hours and sacrificing most of her social life in order to help find closure and justice for the dead and their grieving families. When bodies start turning up in the bayou and surrounding areas, each bearing a cryptic hint as…